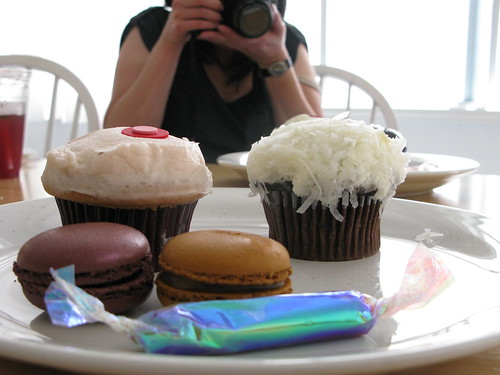 My bff Jennifer (the photographer at my blogiversary party) from San Francisco, who rarely visits me cuz she dislikes L.A., came down to stay for a couple of days this week and since she doesn’t drink I had to think of other ways we could have fun. Solution? Take her on a tour, albeit a brief one, of Yummy L.A. She swears that there aren’t any decent cupcake places in SF. Weird, considering it’s supposed to be a foodie city.

So hours before her return flight, we went to Joan’s on Third for breakfast, picking up a chocolate marshmallow cupcake and a coconut chocolate cupcake ($3 each). And of course, we had to do a quickie pilgrimage to 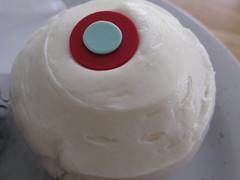 where all cupcake-fiending tourists should go when visiting Los Angeles, Sprinkles. There we bought Southern Red Velvet and Strawberry cupcakes ($3.25 each) to add to our diabetic-coma-inducing collection. Surprisingly there was NO line. Yes, it was noon on a Wednesday, but still. I was a bit disappointed by that. I wanted to show her how insane people are about it, and told her it’s the place that kicked off the cupcake craze in L.A.

To mix things up, I took her to

(BTW, the day before I had taken her to Vanilla Bake Shop to show off my favorite cupcake babies.) 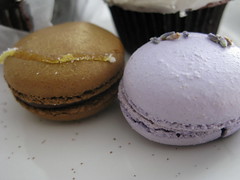 took several pictures of this bounty of sweets. So pretty! The candy buttons on the Sprinkles cupcakes, the pastel colors of the Boule macarons, the ooey-gooey chocolate icing of the chocolate marshmallow cupcake and even the pearlescent sheen of the fleur de sel caramel’s wrapper.

When that was done we took great pains to divvy everything up. I insisted Jennifer try the Sprinkles red velvet cupcake since it’s one of my faves. She wanted me to try her caramel and pomegranate macarons; cutting those in half proved tricky as the butter knife broke up the delicate cookie. Aw.

Joan’s on Third: Me — That chocolate marshmallow cupcake was surprisingly not as uber-sweet as I was afraid it was going to be. In the center of the cupcake was a cream which tasted more like vanilla than sugary marshmallow, but I wasn’t complaining. The chocolate cake for both cupcakes was very moist and rich. The coconut chocolate cupcake reminded me of a gourmetlicious snowball minus that sticky marshmallow center. Very tasty cupcake.

JLow — The cupcakes from Joan’s on Third were good. Not as good as the Vanilla Bake Shop sweets, but I wouldn’t kick it out of bed. They were a bit on the sweet side for me and they weren’t as moist as the VBS babies.

Sprinkles: Me — The strawberry cupcake is now one of my new faves here. I usually stay away from cupcakes that aren’t chocolate but this has changed my mind somewhat. The strawberry cake was so light with tiny bits of strawberry in it and, mmm that sweet strawberry frosting. A perfect summer treat. I, of course, loved the Southern Red Velvet. And you can never go wrong with cream cheese frosting.

JLow — The Red Velvet was OK. I liked the VBS baby cake version better. It was a tad on the dry side, not a lot but enough to make me think “Meh.” The Strawberry cupcake on the other hand was FABULOUS! OMG! It was almost juicy, if that’s even possible from a cupcake without any filling! It was strawberrilicious for sure and I would eat way too many of them if I lived in LA. The frosting was so good and the cake was super moist. My hands down super duper favorite!!

Boule Atelier: Me — I wasn’t crazy about Jennifer’s choice of macarons. The caramel one had an actual layer of caramel in it. I’m sure if this wasn’t one of the last of the long line of sweets that I consumed in this one sitting, it would have been fine. But as it was, its uber-sweetness made me want to gag and I had to save the tiny bit left over for another time. The pomegranate macaron reminded me of fruit rollups. I loved the lavender vanilla macaron which had a perfumey aftertaste but not in a bad way. I could see it as a perfect addition to a girly party like a bridal shower or something. The chocolate orange one tasted as I’d expect: chocolate and orange but in that delicate cookie.

I wish these cookies cost less. So expensive for something you could just pop in your mouth that you feel obligated to eat it in bites to make it last longer. As for the fleur de sel caramels, I saved mine for another time. I still haven’t eaten mine. Waiting until I’m in the mood to eat sugary treats again.

JLow — The french macarons were OK. They didn’t really stand out in taste despite the exotic flavors & names. Compared to the LaDuree macarons I had when I was in Paris, these paled in comparison. The caramel fell a bit short and had nothing really to offer. The pomegranate was not bad. It was tart but it was kind of nice if you hadn’t had any other sweets before it. The last sweet to be had was a fleur de sel caramel from the same shop. It was not bad. It was a bit on the salty side at some points while it melt away in my mouth, more so than I was expecting, but it was creamy and made me smile after it was done.

So after our afternoon of delights, I dropped off Jennifer at LAX, bidding her adieu as she walked away with a sated but glazed over expression on her face, still buzzing from her sugar high. I was happy that I did my job…and then I went home and crashed.