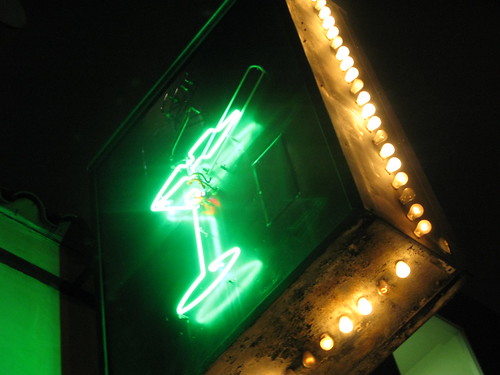 I can’t remember the last time I went to Liquid Kitty in West L.A. For me, it was a place of heartbreak and crying into my potent cocktails, that very dark and loud bar. Back during that time when a cosmopolitan was called a martini. The Kitty has been there for so many years that I guess I sorta took it for granted, plus I’m not crazy about very dark and very loud bars.

But this past weekend I found myself there again meeting LAist’s Elise Thompson for a rum tasting she arranged with Dave the owner. Elise had received this pricey rum in the mail and 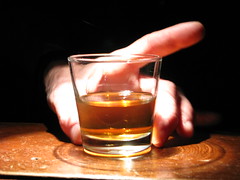 wanted to compare it to other pricey rums. So we sipped about four different kinds. I’d tell you about them if I took better notes but I couldn’t write in the dark.

However I was able to appreciate the new stuff at the bar. There’s now a smoking room where before there was a storage closet. It’s just off the entrance on the right, marked by a small sign with a cocktail glass and a cigarette picture. This new room is where smokers go when they want to enjoy their drink while they smoke. Elise and I found it a great place to have meaningful conversations (when there aren’t any smokers around) because it’s quieter than the bar. It’s nice when you don’t have to yell while conversing.

In the tiny room are some bar stools and a ledge for drinks, and hanging from the ceiling is a dimly shining chandelier along with a “No Vacancy” sign and a creepy mannequin on one side and a fan on the other. Apparently this room opened up in October of last year. Dave briefly considered making a smoking patio out behind the bar but then there’s that little issue with the next-door neighbors who don’t like noise. 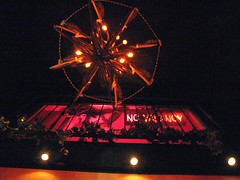 When Elise and I were scared away by a smoker, we returned to our corner seat in the bar. After sipping the rums straight, Elise asked the bartender if we could have each of our two favorites mixed with Coke to see how they’d taste that way. At this point I didn’t feel like drinking anymore. I’m not a big rum drinker so I looked over the specialty cocktail menu at our table to see if there was anything else I might like instead.

Unfortunately, they were the same cocktails I remember. That Lolita with vodka, lime juice and blue curacao that had me waking up one morning after a night of heavy drinking (read: two Kitty cocktails) to large moist spots of blue on my bedspread. The Magic Christian with Absolut Kurant, triple sec and lime juice which I remember being terribly disappointed by but too embarrassed to return since I had just ordered it for its name. But then I noticed the Travis Bickle — a Bulleit Bourbon Manhattan. “Is that new?” I wondered or had I just not notice it before because Manhattans were too hard-core for a newbie drinker like me back then.

Sounded like it would hit the spot, but I decided instead to save it for another night. Didn’t feel like mixing my liquors. However, I did appreciate that the cocktails are available in two sizes: $7 medium and $10 large. When I pointed this out to Elise, who is a regular of this bar from way back, she clarified that all the drinks here are doubles. You order a rum and Coke, you get two shots of rum in that instead of just one. That’s just how they roll at the Kitty.

And there are newish specials added to the cocktail menu:

Also new, to me, are the shots of horseradish vodka ($5) and absinthe ($7). Eeek. Regardless of those, I think I’ll give the Kitty another chance. Anyway I have to come back for Travis. Now, if only they turned down that blasted music.

BTW, old punk rockers out there might be interested to know that the bar will be throwing a punk rock barbecue on Sunday, August 17 from 2:30-7:30pm. Five bands, cheap beer and no cover.