Dear Caroline on Crack: Where To Throw a Surprise Party at a Bar? 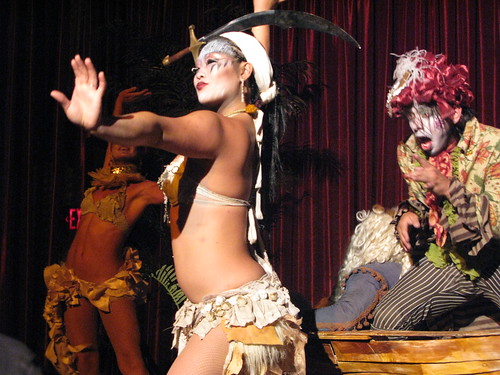 I’m a longtime reader and thought you’d be the perfect person to ask this. A friend of mine is trying to throw a surprise party. She needs a space — preferably a bar, lounge, hotel bar, club, rather than a restaurant — that can hold about 50 people for about two hours (can be early in the evening, like between 6-10 on a Friday or Saturday). Is there anywhere that won’t charge her thousands of dollars (which is what most places have been quoting)? Her party will all be buying multiple drinks (or willing to pay for bottle service), if that helps.

Any help would be much appreciated, if you have a moment!

Well, usually for parties at bars, especially when cost is an issue, it’s best to throw them during an off-night, like earlier in the week. But since your friend wants the party on a weekend night…eesh. Anyway, I asked around at some of my favorite spots to see what they’d charge for your friend’s party and here’s what I found out:

Bar Lubitsch in West Hollywood (where I’m having my blogiversary party btw): They can give you the back room at no charge. As far as drinks go, you could pay for them by consumption (average $9 a drink) and could set a maximum. Or you can buy bottles — $300 for each bottle and makes about 20 drinks.

The Griffin in Atwater Village: To rent the back bar/room (really nice btw) you’ll need to have a $500 minimum bar tab, including 20% (or more) gratuity on a Saturday, and the space is yours from 8 until 11pm. You’ll have a full bar, and a private space capable of holding your crew. So there is no “rental fee,” just a minimum tab.

South in Santa Monica: On an off night it’s usually a food and beverage minimum of around $1,000-$1,500 dollars (depending on the room and the times) for three hours. But Adam said that since you’re a crackhead he’s willing to work with you and get you a deal and match anyone. FYI though, this place gets crazy busy on weekend nights.

The Edison in Downtown: I know you said you didn’t want a place that charged “thousands of dollars” but I figure this is good to know because this bar would make an awesome party spot. The Generator Lounge, which is the Edison’s most impressive room, holds up to 80 people. To reserve that room from 6-9pm would cost $1,500, after 10pm it’s $2,000. There’s also The Tesla Lounge, which fits 40-50 people, but not anymore than that. That room would go for $1,000 before 9pm and $1,500 after. Aidan, the director of beverages, also said they can set you up with some tasters and a deal on drinks, too, cuz of your crackhead connection.