Balshstille Day: A Good Cause and Lots To Learn 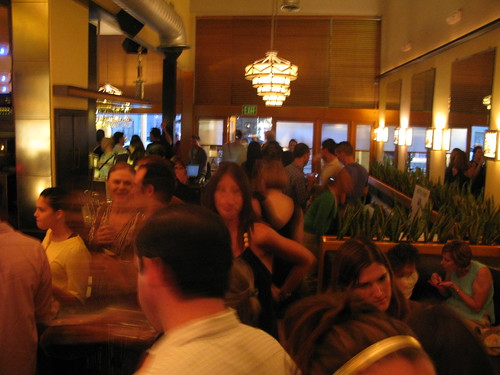 Tons of folks from the food and cocktail community, as well as their friends and some foodies, came together last night at the Foundry on Melrose to help out Billy Walsh, a cook at Craft Restaurant and a waiter at Osteria Latini, who was in a horrible traffic accident this past May. Billy wasn’t present at the event but if he were, he would have been touched by the turnout which ended up raising $19,000 — wayy more than was anticipated — for him. Yay! Congrats to Christine D’Abrosca and crew for putting together a successful event. 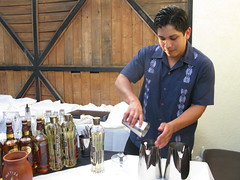 I was thrilled to see some of my favorite bartenders there — Marcos, Damian, Michel, Chris and Joel — slinging drinks, working as barback, serving appetizers. I hung out with Silamith of Martin Miller’s Gin and her husband James (who convinced me that I need to get the new iPhone) as well as Just One Platers, Neil and Margaux. Crackhead and party girl Lourdes was there as well as my girl Kylee from Katsuya and dear Aidan from The Edison. It was a fun event and also a good learning experience, turns out.

For instance, did you know that the Foundry on Melrose is actually all bar and lounge in the front? Dining is actually in the back on an outdoor patio. That’s just fabulous to me because, having never been there before, I’ve always thought it was just a fancy and expensive restaurant. Now I have a new place to go to on Melrose for cocktails. And turns out they actually have live jazz and blues bands, 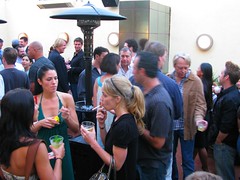 Today through Sunday, if you find it extremely difficult to get a good drink in this town, it’s because almost all the good bartenders are at the week-long Tales of the Cocktail event in New Orleans getting their drink on learning new tricks. Fortunately (for us), Michel will be staying behind to man the bar at Comme Ca Wednesday, Thursday and Saturday. He had a wedding to participate in so couldn’t go. But, again, yay for us! Also Aidan will be at The Edison downtown Wednesday through Saturday if you want to keep him company and drink a yummy cocktail while you’re at it.

Also, Joel of Comme Ca, told me that the restaurant is opening up another location in South Coast Plaza in the O.C. Apparently it’s going to be 8,000 square feet. Yikes. 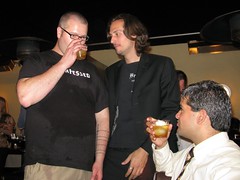 Damian, now of Gordon Ramsay at The London, said I should visit him at his new digs which has a huge bar area and is always manned by four bartenders. Apparently in about three to four months, the restaurant will also have a lounge. Sweet! BTW, if you visit Damian make sure to ask him for the Bee’s Knees. I wasn’t able to ask him what he put in it but it’s just so delicious with a bit of a kick. Oh, also, he said that the winner of Hell’s Kitchen, Christine Machamer, and new executive chef, is starting soon. I don’t watch that show so I don’t really know what that means, but there you have it.

Pictures from the Balshstille Day event.