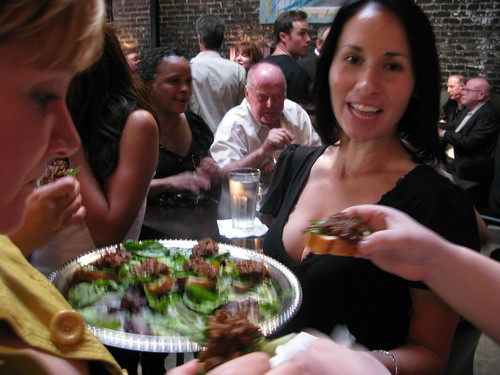 The much-anticipated Rush Street opened in Culver City to the public on Saturday but I was able to check it out at its grand opening party on Friday. Friends, Culver City neighbors (including the CC chamber of commerce), foodies and the media were there enjoying the three hours of open bar and the passed appetizers in the Chicago-inspired restaurant setting. 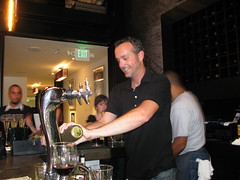 I was just happy that my ol’ friends, Steve and Thomas, my first favorite bartenders ever from Ford’s Filling Station, had found new digs. Steve had moved on from Ford’s to Kumo and Thomas was instructing boot camp. And now here they were, the boys back together again, manning a very busy new bar. I didn’t really get a chance to chat with them because they were making drinks nonstop. But at least I was still able to get a few cocktails from them, more on that later.

The new restaurant was open and airy from its front street-side patio to its second-floor patio in the back. The main dining room featured high wood-beamed ceilings and had a second-floor lounge loft overlooking it which sported a second bar and a beautiful

The huge space used to be a sign shop and parking lot and most of it was built new, namely the area toward the back with the rear dining room on the first floor and the upstairs area. 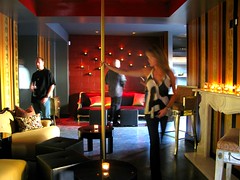 The first floor, with its outdoor patio and lounge area where you can enjoy your cocktails near the bar, also had booths lining the brick wall opposite the bar. And there were dining tables toward the rear. Upstairs was more for lounging with that second bar, low couches and even a “fun” stripper pole in a small beautifully hand-painted seating area on the way to the back patio.

Every detail of the architecture, setup and artwork on the walls warranted attention. But looks like my favorite place to sit will be at the main bar (second is the upstairs lounge) of course so I can enjoy Steve and Thomas’ cocktails. Tonight’s specialties were kiwi cucumber martinis and mojitos and there isn’t a specialty cocktail menu list for the bar yet. But it is fully stocked and the boys will make you whatever you desire or even things you didn’t know you wanted. 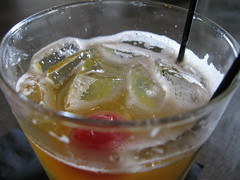 juice. Steve made me a banana cream pie martini which was so drinkable I think I downed it in three greedy gulps. Tasted just like creamy banana pie and wasn’t over-the-top sweet.

The bar menu features 11 beers on tap from Stella to Blue Moon to Craftsman Caberia (?), as well as six bottled beers and lots o’ wine. The best part is that there’s even a section of the menu dedicated to designated drivers offering a selection of Fizzy Lizzys, ginger beer and homemade limeade, to name a few. I love when bars/restaurants do that.

As for the food, from the little I was able to grab off the rare passed appetizer platter (it seemed like guests mobbed the servers as soon as they walked out of the kitchen), I wasn’t all that impressed. I sampled the greasy pig in a blanket, the greasy thin-crust pepperoni pizza, the greasy egg roll, the meh pulled pork sliders, equally meh hummus crisp and a pretty but uninspiring sour cherry soup. However, I did enjoy the asiago fries and the butterscotch pudding. 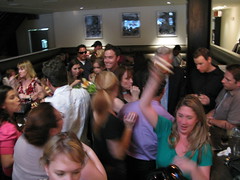 Yeah, I wasn’t too crazy about the apps but i’ll just chalk that up to a new kitchen. However, peeking at the tentative food menu (no prices listed), there are things that I’d be curious to try, like the lobster thermador ravioli and mesquite turkey burger. But that depends on how much they will go for.

I’ve only been to Chicago once so I don’t know how reminiscent of the Windy City Rush Street is. But apparently the TVs located around the bar and restaurant will favor Chicago sports clubs, so there’s that.