Reinventing the Gin & Tonic: Cocktail Showdown at the Edison

Last week I was fortunate enough to be a judge for a gin & tonic competition sponsored by Martin Miller’s Gin at the Edison downtown. I know! The competing bartenders were from some of L.A.’s finest establishments like Comme Ca, Hungry Cat, Gordon Ramsay at the London and the Edison. Their challenge was to reimagine the gin & tonic cocktail by giving this classic a unique and modern twist, from ingredients to garnish. 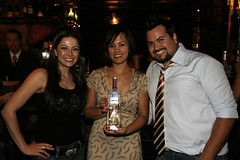 I was one of only three judges on this panel. My esteemed colleagues were Chris Ojeda of Osteria Mozza and Pilar Lastra (aka #14 on TV show Deal or No Deal). It was a nice mix of glamour and cocktail know-how…and me.

We were sequestered in a side room away from the bar so that we couldn’t see who was making the drinks and play favorites. A wise maneuver considering my favorite bartenders were in fact in this competition.

Instead we had to judge 12 cocktails blindly. Silamith Weir, Martin Miller’s Gin brand specialist, would bring us a trio of each drink only providing us with the name of the drink and what it was garnished with.

Concoctions were judged on taste, presentation (read: sexiness) and innovation. Simple, right? Welll, after the first five, there was some disagreement among the judges about what tasted good. 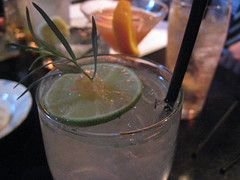 garnish and tasted of spiked spa water. Normally I’m all for that but it masked the G&T more than reinvented it. Chris liked the cocktail called Two Kumquats and Tonic for its use of rosemary while I was attracted to the unexpected sweetness of amaretto in the Angel’s Feather cocktail.

That’s when I realized that our different requirements for a good cocktail might present a problem in picking one winner. But then came a little drink called Gin & Tarragonic. Its appearance made us ooh and aah as it had, literally, stood out from all the other creations.

It had a thin lime wheel floating atop the surface of the drink while balancing a tuft of tarragon that was held in place by a piece of honeycomb. The cocktail itself was oh-so subtly sweet and so drinkable and refreshing. But more importantly we all liked it. Its sexiness was off the scale surpassing “Brangelina” level (an actual rating on our evaluation sheets) and it was something we’ve definitely never tasted before while still resembling a G&T.

We went on to sample several more cocktails like the Gin & Juice (& Tonic), a muy caliente and peppery Grounds for Divorce and a beautiful but perfume-y Amethyst. But we always 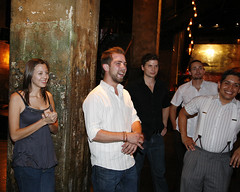 went back to the Gin & Tarragonic as our fave.

Chris did the honors of announcing the winner to the bar of waiting bartenders after the last cocktail was put down. The grand prize was an all-expenses trip to the upcoming Tales of the Cocktail convention in New Orleans in a couple of weeks. A lot of these guys are already going of course but all-expenses paid is always a good thing.

So winner Joel Black of Comme Ca was told to pack his bags for the trip. He was thrilled and honestly looked like he didn’t expect it. But we picked his cocktail, not only for its presentation but its effortless yumminess.

Top with Fever-Tree tonic water. Muddle all ingredients except the gin. Add gin, shake lightly, and strain into a Collins glass.

You won’t see this added to Comme Ca’s printed menu but Joel will be more than happy to make it for you when you stop by. Make sure to congratulate him while you’re at it. He’d love that.

Bonus: The recipe for the runner-up which wasn’t announced to the bartenders but it’s another one that all the judges agreed on.

More pics from the cocktail contest.