uWink Rebooted: Has the Novelty Worn Off? 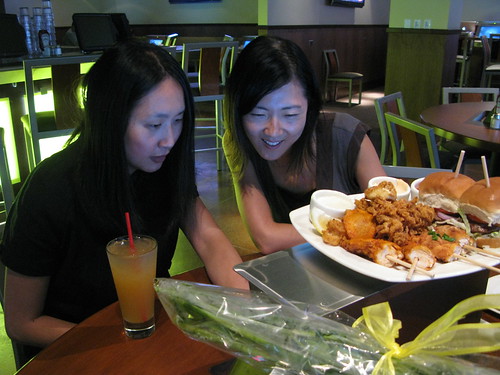 Last night I decided to have a low-key intimate celebration for my fake birthday (my real birthday is next Saturday) at uWink in Hollywood & Highland. I had had such a great time at the new restaurant’s grand opening media party a couple of weeks ago that it seemed perfect for my small party of six. We’d nosh on appetizers, drink cheap and potent cocktails and play drunken trivia. And since I heard reports that the place is usually pretty dead I knew I’d get the non-hectic birthday I desired as well as a guaranteed place to sit. And plus, no reservations needed, even for a group of six. 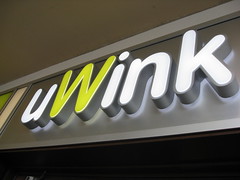 Unfortunately my experience there was so different from my first time. The staff was still friendly and the games were still fun and I still enjoyed my cocktail (this time I ordered a Maker’s Manhattan which was delicious) but everything else was…well, not great.

I discovered that you actually don’t get game credits for your purchases (i.e. you order a $7 cocktail and get seven credits). Now it’s 25 cents a credit! This was a recent change. But at least the first 60 minutes of game-playing are free. However, I’d recommend getting out of there after those 60 minutes are up because you can easily rack up the credits in a short amount of time. (Each game is worth about two to three credits.)

We discovered if we kept going in and out of the game, i.e. to order more drinks, we had to pay more credits every time we got back in the game. They should make it so that you can access the order screen without having to leave your session of Zillionaire (which is my new favorite game btw). Or at least provide a screen prompt before you exit warning that you’ll lose your session.

Also, at first I thought it was neat that you can order more water through the screen until I realized what a huge pain in the ass that was. I’d rather just tell the “entertainment director” that I’d like a glass of water with no ice and a slice of lime than have to put the request in through the screen and scroll through the different choices to customize my glass of water. And it wouldn’t have been so terrible if they checked on us more frequently. We had to use the “help” button several times to get some attention, when our screen went dead and when we had a question about a charge on our bill. 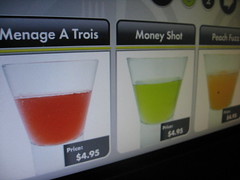 Oh, and what’s the point in allowing us to spend all this time customizing our food when it comes out the regular uncustomized way regardless? I had ordered the rock n’ roll quesadilla with chicken instead of shrimp, and wouldn’t you know it? Shrimp anyway. But I ended up keeping it instead of sending it back as it tasted good with the shrimp after all. Hmm, maybe they just knew what was best for me.

My friend Shelley who was with me had said the same thing had happened to her the last time she was here. She and her group of friends spent all this time customizing their food only to have it come out the regular way.

The novelty of the touchscreen DIY service wore off pretty fast for me during this round. For some reason it seemed that things took longer to do through the screen than simply when looking through a menu. When you go to a regular bar, you can just scan a specialty cocktail menu in one shot; there’s the name of the drink and its ingredients.

Here, you have to go to several different screens to figure out what’s in a Hollywood Nights martini and how you can ask for it. It made me miss the times when I can go to a bar and just ask the bartender out right what sort of gin they have and, oh, can I get that without a maraschino cherry?

Fortunately the birthday celebration wasn’t a bust. Our group enjoyed playing games with the entire room — trivia and U.S.I. 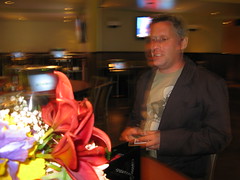 where you have to remember details about a picture that was shown and then answer questions about it. The music was pretty good, mainstream but fun for everyone as they played everything from Spoon to Led Zeppelin to Run DMC. And after 9pm well cocktails were only $4, margaritas were $5 and beer was half off. And there was even a fire alarm (a false alarm) that set off the sirens and the strobe lights. Oooh! Oooh!

And I love that you can go with your group of six and everyone can pay their own bills separately without feeling like they’re hassling the waitress as the computer keeps track of what’s on everyone’s individual tabs.

I’d say this is a great place to take your friends from out of town or for tourists to stop by after a day of hunting for stars’ names on Hollywood Boulevard. Or kick off a Thursday night Hollywood barhop here, enjoy the happy hour drink prices and play free games an hour. Then stroll down the boulevard to Les Deux or the Powerhouse.