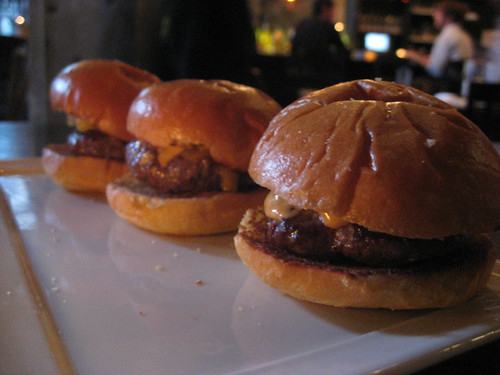 You know where you can find me on Monday nights from now on? At Citizen Smith for its Friends and Family Mondays where you can get 50% off ALL food. Yup, my friend Shelley and I went there last night to check it out. It sounded like a deal too good to be true but this time it actually was true…and delicious.

The Hollywood restaurant on a Monday night wasn’t exactly packed but it looked like most of the tables were occupied. We had made a reservation beforehand and were seated across from the bar in a huge booth with a pony skin wall. Suddenly we wished that we had invited more people as it felt silly for us to take up this huge booth. Would have been awfully romantic though had it been a date. 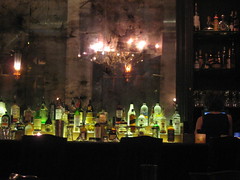 The waiter was prompt and friendly and immediately took our drink orders. I asked if they had a specialty cocktail list but unfortunately they don’t. He did assure me, however, that they have a full bar and could make anything that I desired. Just no blended drinks like mai tais and daiquiris. “Hmm, I like whiskey,” I confessed. “How about a Manhattan?” “Oh, I’d LOVE a Manhattan!” As he kindly fetched my cocktail, James Sinclair, managing partner of the Paja Group (the new owner of Citizen Smith), joined us briefly.

We talked over the live jazz piano music about this Monday night special. Apparently it was created to give people, who normally wouldn’t consider CS cuz of its prices (me!), a chance to try the food. Looking at the dollar amounts on the menu, I was extra grateful as entrees were about $26 and up. 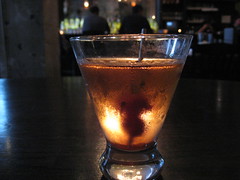 mentioned on Eater L.A. where it seemed all the liquor bottles and taps were removed from the bar. He said it’s simply because he had just acquired the place about 30 days ago so it was just a matter of the liquor license. But he did enjoy reading all the rumors and theories about what was going on as he is an admitted gossip hound. I glanced at the bar across the way and sipped my tasty Manhattan, grateful that they got their liquor back in time for my visit.

After James left, Shelley and I went through the menu oohing and aahing. But then suddenly doubt crossed our minds and we wondered if perhaps the 50% off was just for entrees. I know, even though I had blogged this special a couple of weeks ago, I was still unsure. I think it’s because, again, it seemed too good to be true. Surely there was a disclaimer somewhere. But we asked the waiter and he assured us that we could get half off EVERYTHING — from appetizers to desserts. The discount would be taken off the bill total (minus drinks of course). Shelley and I squealed. Wow!

At first I considered splurging for the $26 Atlantic Salmon but 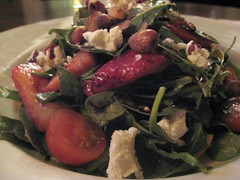 then calmed down and ordered the Summer Salad (reg. $12). We also got the trio of sliders (reg. $9) and the jalapeno tuna tartare (reg. $18) for apps. Shelley picked the Soup & Smith — tomato bisque and grilled cheese sandwich combo (reg. $12).

The appetizers came out first. The triple prime dry aged beef sliders each had a different type of cheese on it: blue cheese, Vermont cheddar and brie. We found the meat tender and the brioche bun fresh and fluffy but kinda wished that there was some sorta sauce served with it. “Why don’t you ask for ketchup or something?” I urged Shelley but she said something about not wanting to offend the chef.

The jalapeno tuna tartare was delightful, tasting fresh and, despite its name, not too spicy. “Even someone who’s not into spicy foods can eat this,” Shelley marveled. It came with a cucumber and apple toothpick salad that we both ignored, though, as we don’t like cucumbers. But the serving of salt and pepper fingerling potato chips was just the right amount to go with 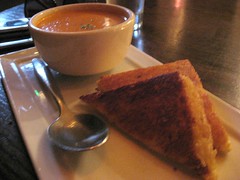 our brick of tuna. No need to ask for more.

Then our dinner arrived. Shelley’s soup and sandwich portion looked small compared to my big summer salad of baby arugula, strawberries, red ratites, yellow teardrop tomato goat cheese, smokehouse almonds, dressed in balsamic vinaigrette and balsamic reduction. So I gave her some of my food; a good thing considering she felt the grilled sandwich tasted of buttery and cheesy sin.

I had picked my salad for its unusual-to-me nature and yummy list of ingredients. In the end I wasn’t disappointed. The arugula was fresh and I loved that mix of the balsamic vinaigrette and strawberries as well as the goat cheese and smokehouse almonds.

Considering we didn’t order entrees and stuck with appetizers and small dishes, we were stuffed. But of course still had enough room for dessert. There was a frozen hot chocolate that reminded Shelley, an ex-New Yorker, of Serendipity and I think there was a dark and white chocolate mousse among others, but we only had eyes for the frangipani mocha ice cream cake (reg. $10 — 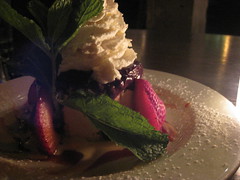 It was like a really fancy ice cream sandwich, arriving at our table with a towering dollop of whipped cream, strawberry slices at each corner and the espresso ice cream atop the cookie. And it was deelicious. Not uber sweet. The ice cream was creamy and its espresso flavor wasn’t overpowering or sharp. It was because of its deceptively subtle flavor that Shelley went on to finish it even long after I threw down my fork. “I can’t believe that’s only $5!” I exclaimed.

Afterwards, we sat there holding our food babies and enjoyed the surroundings. Seemed like everyone around us — diners to bar patrons — was remarkably dressed down for such a swank atmosphere. Here, there were chandeliers and pony-skin walls evoking a very sumptuous old world salon. And yet the vast majority of customers were dressed in t-shirts and jeans…for which I was thankful. It was because of the chi-chi, too-cool-for-school, young Hollywood image that I first knew Citizen Smith for that I had stayed away from it this long. But it was nice to see that it invited a laid-back clientele.

Yes, this is definitely where I want to spend my Mondays. Our total bill was about $30.50 and we split that (no 25% gratuity fee as had been mentioned on Yelp). Such a lovely day to kick off the week — enjoying a lovely dinner in a Hollywood restaurant for only $15.