Do Play With Your Food: uWink Hollywood Debuts 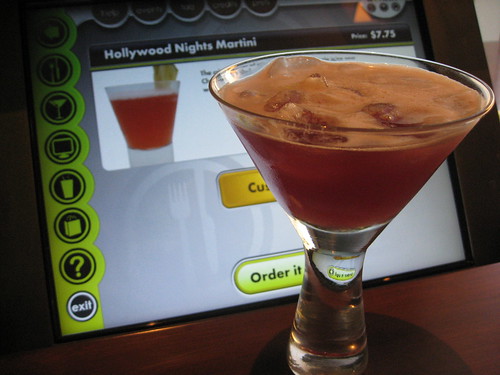 The new 7,300-square-foot Hollywood & Highland location of uWink (its first location is in Woodland Hills) opened to the general public last night. But Monday my friend dotsara and I were able to get a sneak peek of the high-tech interactive restaurant at the media party on Monday. We had free reign over the food menu and extensive cocktail list and could order directly through a touchscreen at our tables instead of going through a waiter. I could see how this would be dangerous for the wallet and the liver, considering how easy they make it to ask for another drink. 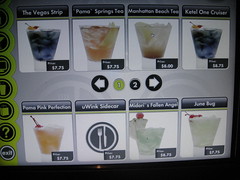 And yes, I did find it a bit overwhelming pouring over the cocktail list, the specialty cocktail list, the different liquor types and the beer list. Our “entertainment director” (read: waiter) came over several times as I tried to decide what I wanted to drink.

I didn’t really find anything compelling on the specialty cocktail list but felt like I should try one out cuz “while in Atari Land…” So I fought the urge to just go with an Old Fashioned and chose the Hollywood Nights martini ($7.75) — gin, pineapple juice and Chambord. Cool thing is that you can customize your drink (this goes for anything you order, entrees included). “Umm, Hollywood Nights Martini on the rocks with no maraschino cherry, please.”

I actually liked this cocktail, not sickeningly sweet and felt appropriately tropical for a summer evening. But next time I think I’ll order it straight up.

We were told that the raspberry mojito is the popular drink at the Woodland Hills location but I wasn’t crazy about it. Too sweet, especially with the 7Up. Fresh raspberries, though. I 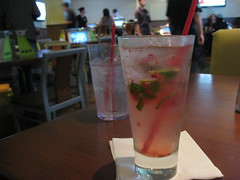 was supposed to split it with dotsara but we both ended up pushing it to the side. Instead, she found a new favorite in the Kamikaze cocktail, customizing it with Ketel One Citron.

Cocktails were priced amazingly decent for Hollywood, most less than $10. There’s also a beer list with good stuff on tap like Blue Moon, Hoegaarden and Stella ($5.50). Or you could order a glass of wine for $6-$10. They had Yellow Tail Shiraz and Sterling Cabernet, to name a few on the short list.

The food menu had American bistro fare like pastas, salads, burgers and entrees, and ranged in price from $11-$26. I ordered the yummy chicken garlic penne ($11.95) while dotsara had the Jr. Classic Cheeseburger which came with fries for only $6.95. At the end of the night, she couldn’t stop talking about how delicious it was.

Even though we, ok, I took forever deciding what I wanted, the drinks and food were served quickly. Most of our interaction was with the touchscreen but we had no shortage of attentive staff filling our orders, clearing our plates and answering our questions. I don’t 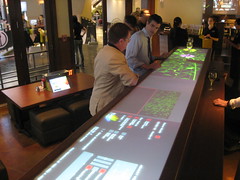 know how many different people came by to check on us. Don’t know if this was just for the media party or if this will be a regular thing. All I do know is that it interfered with my game playing dammit. Kidding.

And yes, you can also play all sorts of games via the touchscreen, either with the people at your table or with other tables on special nights. No word yet on where they are on developing technology so you can buy a drink for that cute guy or gal at the next table.

But right now you can play trivia games and check your horoscope among other things. Oh! And I found myself the answer to a couple of the trivia questions in the game Zillionaire. But I think they just did that for the party. Still. It was pretty awesome.

Dotsara and I got addicted to the word game, My Word. It’s sort of like that Pyramid game show where you have to get the other person to say a word without saying it yourself. So fun! Thing is, though, it only had two short rounds so we had to keep restarting it and kept saying, “Just one more, just one more.” We probably would have left the party an hour sooner had it not been for t 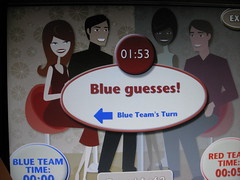 his game What’s weird is that we seemed to get better at playing it the more we drank.

The games cost credits to play, credits that you accumulate as you order. So say you order a $7 cocktail, that’s 7 credits. You don’t have to pay extra on top of that to play. But word has it that they’re looking to make credits unlimited in the future. Yay!

The 199-seat restaurant’s soft opening to the public was yesterday but the grand opening party will be on June 27 and 28 where diners can play games for prizes.

By the way, our friends in the Bay Area can look forward to a uWink opening up near them in Mountain View in summer of this year. Now if only they opened one up in Santa Monica.

More pics from the uWink party.