Into the Wild: Rafting on the American River 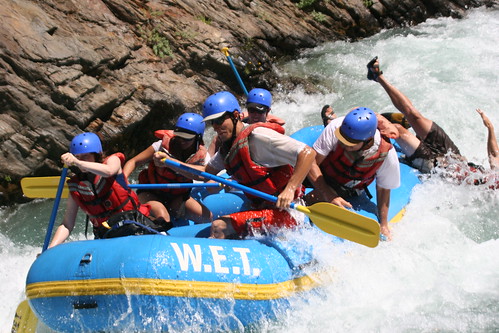 See that person falling out of the raft on the right side of the above photo? H’yeah. That’s our W.E.T. rafting guide, the one whose expertise we relied on to get us through some hairy class IV rapids and 19 miles of the American River (near Colfax in NorCal). It’s OK to laugh; he made it back in the raft. The other guides in the three other rafts got wind of this and razzed him the rest of the trip, saying 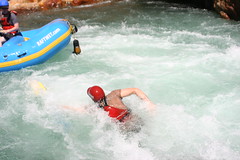 that he owed them beer for the blunder. Funny thing is, he was the only one who fell out of our raft during the entire journey.

I thought for sure I’d be the one to fall out seeing as how it was my first time ever river rafting. I don’t swim or really do anything resembling a water sport. And yet, this was on my list of things to do before I die because it sounded and looked so fun and exciting.

No one in our group told me the differences between the different classes of rapids or that there were different trips we could go on depending on our level of expertise, and I was glad that I was left ignorant of this. I probably would have wussied out and opted for the baby beginner (Class III) trip and then would have missed out on the Tunnel Chute — think Disneyland’s Splash Mountain but as a 15-foot-wide slide with 100 times that amount of water shooting all around you.

The Tunnel Chute, a section of Class IV rapids in the

Middle Fork of the American River, was basically the only spot in our adventure where the guide had us jump in the raft and hold on. Usually we had to sit on the sides to paddle. But in these violent waters, all we could do was sit tight.

“It’s not a place to go swimming. But if you do fall out of the raft in the chute, we can’t go back and get you. You’ll just have to ride it to the bottom,” our guide 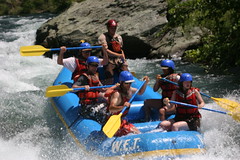 Surprisingly I wasn’t scared through it all, even though we were riding a jet stream of water at what felt like high speeds and I couldn’t see anything but rushing water. Instead it was downright exhilarating. Too bad the chute was at the beginning of our journey, though, as it made all the other rapids seem like a cake walk. But I still had a blast and highly recommend doing it.

And you don’t have to be super athletic either to go rafting even though it is recommended that you are at least fit. But truth be told, I haven’t really kept up my running after the marathon or visited the gym on a regular basis and yet I held my own with the paddling. Sure, the next day my arms, shoulders, back, um…hands and legs were hurting like a mofo and I could barely move, but it was fiiine.

And if you’re worried about not being able to tread water (I know I was), don’t be. Each rafter is equipped with a life vest as well as a helmet. In fact, one of the guys in another boat said that he didn’t know how to swim at all when his friends tried to pull him in the water with them in the stretch of flat water. He ended up getting in there with them, and holding onto the side of the boat.

The entire rafting adventure took about six hours and we stopped at one point to have lunch and take a little break before we tackled our next section of rapids. The 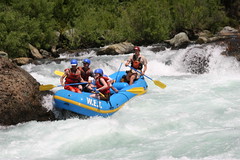 only other place we stopped during the trip was at the portage where we had to get out of the rafts and watch from the sides as our guides rode the class VI Ruck-A-Chucky rapids — a 30-foot waterfall that ends on jagged rocks. Yeah, it was pretty awesome to spectate.

If you decide you want to go rafting, too, I highly recommend going during the summer because you don’t have to wear as much gear AND getting splashed with cold water is refreshing, not masochistic. Also, even though I haven’t tried the other sections of the American River, the Middle Fork ride (which costs about $129) sounds like the best as it has that Tunnel Chute. The South Fork ($129 for full river run) is just class III rapids and North Fork ($109-$129) is just the same stretch of river twice if you want to get in over 18 miles.

We used W.E.T. River Trips and even though I had no issue with them, apparently lots of folks on Yelp have. Mostly complaints about the customer service over the phone. Otherwise, I never doubted the expertise of our guide, never mind that he fell out of the raft. And everyone was so friendly and helpful.

Click here for a calendar of upcoming Middle Fork trips.