Why No Friday Post? Twas Busy Winning a Vespa 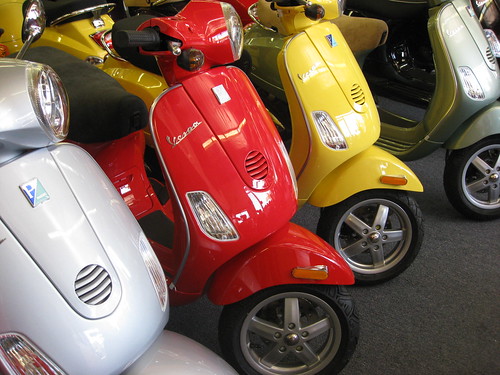 I won! I won! I won! Yup, I actually won that Vespa that I forsook sleep, blogging and my friends for. Here’s how it went down.

On Friday at the ThisNext Community Mixer at the company’s headquarters in Santa Monica, TN members mingled with TN employees over some appetizers, cupcakes and, ah-hem, “interesting” cocktails of Emergen-C vitamin water and liquor. Throughout the course of the party, there were giveaways of “popular ThisNext products” like a bookshelf, cupcake courier and umbrella for randomly selected winners. I resigned myself to not winning any of these since I was waiting for the big drawing at the end, the Vespa LX 50.

My bf and I took the only seat in the place, a couch next to the display Vespa, and watched amused as TN members jumped on it taking pictures with it. “They better not mess up my Vespa,” I winked to bf.

The night felt lonnnng as we waited until 9:30 when they would announce the winner of the coveted moped. Newbie ThisNext member Yolanda sat next to me when everyone gathered to hear the winner of the drawing. “I know I’m not going to win,” she kept saying like a mantra. “But if I do win it, I’m going to sell it and buy a ticket to India.” “Dude, if you win it I’m going to be sooo mad!” I replied.

FINALLY they did the drawing, everyone was quiet except for Yolanda repeating her loser’s mantra. “I know I’m not going to win…” Then I started saying it, too. My friend

dotsara had text messaged me asking if I won and I started to type out “Didn’t win” to her, almost pressing “Send” when the announcer said, “And the winner is CAROLIIINE!”

I sat up, stunned and then thought, “There must be another Caroline” while bf was nudging me “That’s you!” “Nuh uh,” I said. “Caroline….on Crack! Where are you?” said the announcer. That’s when I jumped up with my “Oh my gawd!” and squealing. Yes, I squealed a bit.

I pushed through the crowd, since I had been sitting at the back of the room, and got to the front where the announcer and ThisNext Marketing Manager Lauren Messiah (cool name, I know) stood. I jumped up and down for a bit and then enthusiastically hugged them both. The announcer then handed me the mic, and all I could think to say was “Woooo!” Lame. 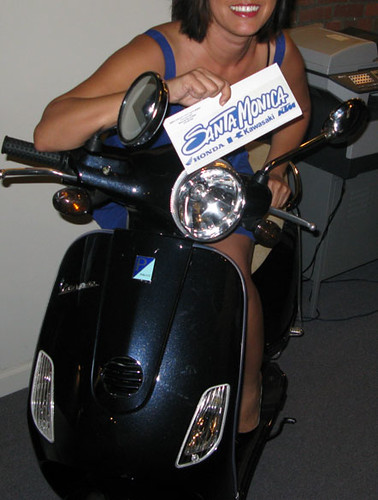 What I really should have done was thank ThisNext for giving me a new addiction, my bf for putting up with my insane need to recommend stuff every day and night and my ThisNext Rival from High School (that’s right, we went to high school together and haven’t seen much of each other since). If it weren’t for him I probably wouldn’t have recommended as much as I did.

You see, he and I were neck and neck toward the end of the contest. On Thursday, I must have had 50 recommends over him but then in the course of the night (apparently the dude doesn’t sleep) he was able to pass me, recommending like a fiend anything and everything.

But his recommends were simple while I actually tried to cram information in mine and that slowed me down. It was only at the end that I learned my lesson and kept it v. simple.

The funny thing is, the person with the most recommends doesn’t win, as the winner is randomly selected out of the total recommends/entries (of which there were over 3,000 by contest’s end). But I wanted to “win” by making more recommends than him. I was on a mission. I didn’t hate him in high school but I was ultracompetitive with him now in this contest.

Anyway, by 6pm on Friday (an hour before the mixer) he had 592 and I was 10 down. Then I realized he stopped, probably to make it to the party on time. HA! The fool! So I went on the Sur La Table Web site and recommended a bunch of stuff from there. “When are we leaving for the party?” bf asked me. “Still recommending!” I replied. “HA! I knew it!” he said.

But after I had 11 over Rival from High School, I finally stopped. Even if I didn’t win the Vespa I was happy that I had more over him, and consequently the most in the contest: 603 recommends.

At the party, I ran into Rival from High School and bf let it slip that we had been battling neck and neck with the recommends. And RFHS acted like he was surprised. “H’wuuuut? I didn’t knowww we had a recommendations battle going onnn.” Huh? Whatever!

I don’t know how he couldn’t have known considering we were the top two recommenders. It said so on the contest page. I would have had more respect for him if he had admitted it but instead he chose to play dumb. “Or is there someone ELSE from high school here?” he took it further. Pfft!

Later when they announced me as the winner of the Vespa, RFHS slunk (slinked?) out of there 10 seconds later, not even stopping by to say congrats and good-bye. H’well! But he did text message me a congrats the next morning.

Anyway, yay! won the Vespa. And I’m going to be enjoying my new Vespa this summer…after I pay for the sales tax, taxes, certification fee, a $300 helmet, DMV fees, insurance and vehicle lock. Oy!