When you think Lawry’s the Prime Rib in Beverly Hills, I’d bet good money that you don’t think “cocktails!” But with the debut of the restaurant’s 1930s cocktail menu, created to celebrate Lawry’s 70th anniversary, that may change.

The cocktail tasting my bf and I attended was to present the so-old-it’s-new list, with its collection of post-Prohibition libations (no vodka-based ones, thank you very much). 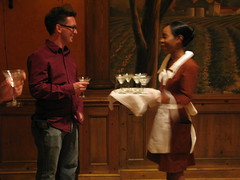 In the small tasting room in the back of the restaurant with us were brand liquor ambassadors, press from Playboy (that’s the only one I remember cuz…why) and others, and even Zagat’s Merrill Schindler in a very orange shirt.

We started off the evening filling up on some “lounge meatballs” which we were told actually have a cult following. They were good but, really, a cult following? The meatballs are usually complimentary and available in the lounge to keep would-be diners occupied while they wait to be seated.

Later on, appetizers were brought out to accompany each cocktail sample that was passed around. The food was so rich and deelish, but unfortunately the timing of the apps didn’t really coincide with the drinks they were supposed to be paired with. However, when it came down to it, we really didn’t care. Just gorged ourselves on the yummy Gougeres (baked cheese puffs), shrimp cocktail, mini baked potatoes, toad in holes (creamed spinach in mushroom caps) and prime rib and whipped horseradish Yorkshire pudding.

The cocktails of the hour they were supposed to match up with were: 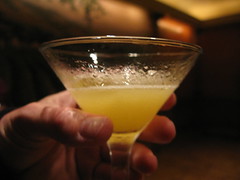 Honolulu Cocktail: Plymouth Gin, Cruzan Light Rum, pineapple juice, lemon juice, simple syrup and a dash of bitters. Surprisingly this wasn’t as sweet as we thought it was going to be having equated “Honolulu” with Mai Tais and Planter’s Punch. Rather it started off with the sweet scent of pineapple juice but on the tongue that sweetness dissipated. Like all the other cocktails we ended up trying that night, it was well balanced in taste. Apparently that’s how vintage cocktails are, concocted to affect the whole tongue.

The French 75: Plymouth Gin, sparkling wine, lemon juice and sugar. As champagne cocktails go, this one had some kick. But it was so light that it’s easy to knock it back. Dangerous. Plymouth Gin ambassador Chris Patino was on hand to school us on the history of the French 75. According to him, the name of the cocktail came from French soldiers during World War I who would knock back this cocktail in 75mm bullet casings before they went off to battle. That’s coincidently where the term “liquid courage” comes from. 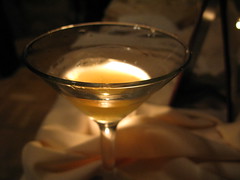 Sidecar: Maker’s Mark, Cointreau and lemon juice. This was my favorite drink of the evening, but then again I’m impartial to whiskey drinks. This Sidecar was a lot smoother than most I’ve encountered i.e. Chloe’s in Santa Monica and Father’s Office II’s in Los Angeles/Culver City. Maker’s Mark ambassador, Amanda Ingram, attributed its drinkability to the Maker’s — one of only a few wheated bourbons. If that’s the case, that’s how I’ll order my Sidecars from now on, because it was tasty.

The other drinks on the cocktail menu that weren’t served (pout) at this tasting party were:

If you’d like to partake of these vintage cocktails ($15 each), enjoy them in Lawry’s lovely restaurant bar where they are served with mini commemorative cocktail shakers you can take home. (If you’re in the restaurant, they are served tableside of course.) And don’t forget the meatballs!