Yesterday’s cupcake challenge event at the Montmartre Lounge in Hollywood appeared to be a huge success cuz 1) it was sold out and 2) everyone in attendance (mostly women) seemed to really enjoy themselves as they sipped their glasses of wine and chowed down on their plates of cupcakes. There were 16 cupcakeries in the house and each brought their collection of favorites for the masses, meaning the cupcake fans at the event who wanted to get more than their $60’s worth could (in)conceivably eat up to 80 cupcakes. (I’m basing this on the guess that each shop brought about five samples each.) Blech! 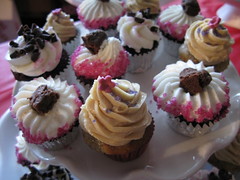 I only say “blech!” because I was on the “celebrity” judging panel with nine other judges (Pat Saperstein from Eating LA, Lesley Bargar from Los Angeles Magazine and Sam Rubin from KTLA among them) who helped sift through all the different cupcakes to pick which bakery had the best original cupcake, the best traditional and the best overall. Oddly enough, we were not a happy bunch.

Before you go and call us a bunch of ingrates, let me tell you we were up to our elbows in frosting. I was sitting next to Sophie Gayot of Gayot and Lindsay of LAist and our bitch session was about how our idea of a judging panel was really different from this event’s. Our fantasy: We’d be set up at a long table that was covered in crisp, white linen with name cards placed in front of us. We’d be given small tasting samples of each cupcake contestant on a plate with a little fork and an actual ballot listing each cupcake with its assigned number.

Instead we were stuck, pretty much unsupervised, at a coffee table in some off-to-the-side area of the club and huddled around a never-ending round of test cupcakes; a lot of them full-size when we were told we’d be sampling mini cupcakes. We had to cut our own samples, some soo sugary and gooey, which resulted in a mess of autopsied cupcakes everywhere. We got frosting on our cameras, clothes, phones, and hair. As the event got 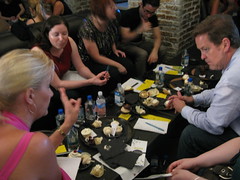 more crowded, people kept trying to scooch in with us. Fortunately, Sophie, with her French accent and commanding air, would shoo them away with a “No, no, no! You can’t zit zhere!”

By the time I hit the fourth sample of cupcakes and realized that we hadn’t even begun to crack this first round of “Best Traditional” samples, a sense of dread came over me. How would I get through this? Fortunately we were given breaks between each category and I used it as an opportunity to stretch my legs and check out the event.

Yup, looked like everyone, including Marni from Goldstar, was having a ton more fun than us. And unlike us, the public only had to eat til their hearts’ content and could choose which cupcakes they wanted to eat. A lot of folks even had cake boxes (supplied by the cupcake shops) that they carried around from one cupcake table to the other, filling up with their favorites to take home. It was a lovely event…and then I had to return to the judging coffee table. Oy!

At the end of our blindtasting of 30 cupcakes, we had to scrawl our picks down on a slip of paper and label it “judges” so that the organizers would know which were ours since everyone at the event was included in the 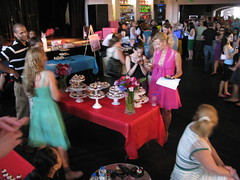 voting. We were told that we’d have the results emailed to us. I wonder if they’ll separate the results from everyone else’s. It would be interesting to see how different, if at all, our picks are from the public’s.

It was fun to see how the other judges judged the cupcakes. I wrote down tasting notes in my handy-dandy Moleskin and peeked at Sam Rubin’s notes where he had given grades to each sample (smart!) while Lindsay scribbled down “yuck” on her sheet of paper for her not favorites (hee!).

Somehow, we all survived the tasting and even had our own opinions of who should win the categories. (Although, it did seem like Sugar Jones’ mandarin orange cupcake with pistachio frosting and Vanilla Bake Shop‘s Key Lime were the favorites.) Surprisingly, after we bid each other adieu from the judging coffee table, I still ran into the judges at the cupcake tables later. They were assembling their collection of favorites to take home.

“You’re taking cupcakes?” I asked Citysearch’s Tara de Lis as she clutched her little Vanilla Bake Shop box. “Yeah, I’m taking them to work,” she replied. Lindsay collected several cake boxes of mini cupcakes to take to the LAist bbq we were going to later. Me? All I took home was the empty 36-cupcake holder that was given to each judge. Yeah, I doubt that will see much action…. At least not for another six months, that is.

What some of the other judges had to say:
Lesley Bargar’s report for Los Angeles Magazine: Sugar Crash
Pat Saperstein’s Eating LA: How To Judge a Cupcake
When Tara Met Blog: Judging the Cupcake Challenge

UPDATE: Here are the list of winners, thanks to Elise and Lindsay from LAist.