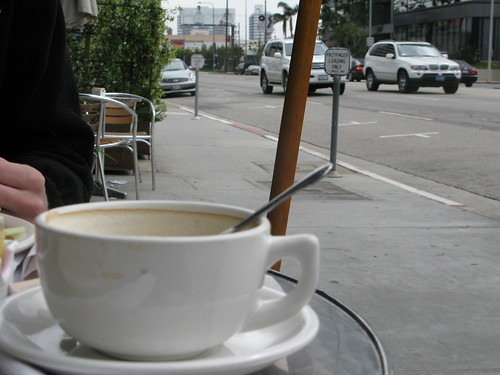 In my on-going search for new favorite breakfast places on the Westside, I decided to give Amandine Patisserie, located in Santa Monica/Brentwood, a go. It’s just a couple of blocks west of my current fave, Literati Cafe, and it’s gotten a ton of decent reviews on Yelp, The Delicious Life, and Chowhound. I read their online menu and with French toast and omelette specialties and yummy-sounding French pastries galore, how could I go wrong?

Well, turns out I could go a lot wrong. My problem wasn’t so much with the food as it was the entire experience — from counter service to finding a seat to table service to finishing my meal.

Even though we got there at around 10 on a Saturday morning and there was no line at the counter, there was nowhere to sit in the restaurant. There were three free tables outside on the sidewalk but on a chilly morning, who wants to sit there?

I really dislike restaurants that make you hunt for your own seats. And if they’re going to do that, have lots of seats available or be very efficient with customer service. Tender Greens in Culver City does it and so does Clementine’s in Century City, and I’ve never had a problem finding a seat at those places even though they’re very busy and popular.

Now since Amandine is a French patisserie, part of me feels like I can’t fault diners for wanting to linger and enjoy their coffee and paper. But when there are clearly people waiting to sit, I dunno, hmm, I usually clear out. No more food on the table, no more coffee to drink, it’s time to leave. Not the case here.

Seemed like no one wanted to leave. Namely this one couple who sat and chatted on and on and on. They were obviously done with their omelettes and their pastries and their cafe au laits. Empty wrappers, dirty napkins on dishes, hands on laps. Time to go! Newp. They just sat there. Perhaps if their dishes were cleared they would have gotten the hint.

So we sat outside on the uncomfortable metal chairs in the cold with the smokers.

For food I ordered the Omelette Lorraine ($8.25) with ham and gruyere but asked for it as a scramble. The food came out quickly which was one great thing about this place. But my scramble hardly had any gruyere in it. Just a tiny knot of it in the corner.

My bf ordered the Country Omelette ($8.75) and said that his came with plenty of cheddar. “Yeah, but if my omelette just has two ingredients shouldn’t they make sure they put a lot of each in it?” I complained.

The only thing I loved about my dish was the side of potatoes which were tender thin slices covered in this cheesy cream sauce with onions. Mmmm, they were soo delicious. I wished I had more of them since I didn’t get much cheese in my scramble.

For drinks, in the spirit of the patisserie, I ordered the cafe au lait so wasn’t expecting a refill but bf got a coffee and was. We weren’t sure coffee came with refills until the server came out with our breakfast and then offered to refill bf’s cup. But then he never returned to do so. “Maybe just go inside and ask for it,” I said, dejected. So he did and when he came out with his refill he whispered how he was glad that he didn’t get a latte.

Apparently the barista who was busy making a latte was dipping the foaming wand into the latte and then taking it out again to make the little heart design in the foam. Problem is, she kept wiping the wand on her bare hand and then dipping the wand in again. Grrreat, I had a cafe au lait. Blech. Sure, her hands could be clean but still…shouldn’t she use a towel or something?

Since the air was chilly and the passing traffic kept blowing a cold wind on my scramble I shoveled it quick as I could into my mouth. “Wow, you’re really hungry,” bf marveled. “No, I just don’t want my food to get cold.”

And as if cold eggs weren’t annoying enough, the couple that just arrived and took the two tables next to us started to rearrange them. Loudly. The seats and table are made of that light silver metal, almost looks like aluminum, so whenever these people dragged them, they made a horrible scraping noise against the concrete. Hello? Pick up the damn chair! It’s not that heavy!

The first couple of times they did this I was able to bear it. But after five, six, 10 times, I had to turn around and say, “What the fuck?!” They didn’t hear me though. They were too busy organizing their stupid chairs and tables just right. Arrgghh! So annoying! Settle down already!

I just wanted to leave but bf was still enjoying his coffee refill so I decided to buy myself a pastry to try and turn this bad experience around. I love almond croissants and I love love love chocolate ones so I was beside myself when I saw the combo in one croissant. Sounded like it would be just the thing to cheer me up.

Unfortunately it wasn’t that good. It was just…eh. Yeah, it was light and flaky and there was a lot of chocolate but I didn’t really taste the almond. And apparently Amandine is known for making great croissants. But I wasn’t feeling this one. Could have just been tainted by my horrible experience.

When bf was done drinking his coffee, the couple were still arranging their stupid chairs for the five imaginary friends who never showed up. To show them how annoying they were being, I stood up quickly knocking my chair out behind me so that it scraped loud and long. Passive aggressive, I know, but at the same time I didn’t want to yell at them and make my morning worse.

So, yeah, why would I ever come back to Amandine when Literati Cafe down the street has lots of cheese, coffee refills and plenty of wooden chairs and seating indoors? Au revoir, Amandine!