Creperie by Jack n' Jill's: Love in My Tummy 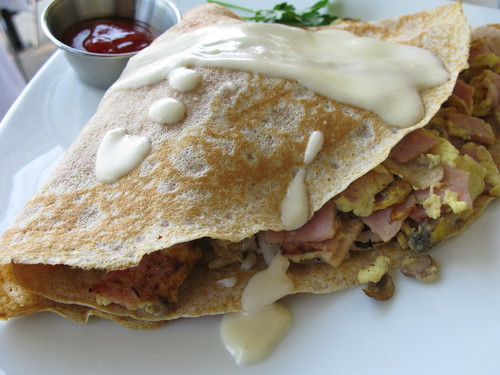 This weekend, to my horror, I realized I ran out of great breakfast joints to go to on the Westside. Usually I just like to roll out of bed, go a short distance and enjoy some yummy dark coffee and an even yummier breakfast entree. And I was kinda sick of my old faves Literati Cafe, Jack n’ Jill and Colony Cafe. I needed something new and different. And I was even willing to go east of the 405 on this 90-degree morning for it.

Then I remembered that Jack n’ Jill’s, home of one of my most favorite yogurt and granola parfaits evuh ($6.95) and the Mexican Hangover Scramble ($9.95) just opened up the Creperie near the Beverly Center last month. Savory and sweet crepes by the Jack n’ Jill’s peeps? I’m in.

And I didn’t care if it was just off Paparazzi Row, Robertson Boulevard. Reading their

brunch menu took care of any fears I had about the lack of metered parking and encountering those dastardly parking enforcement people and the ultra-judgmental look-at-mes.

Six savory breakfast crepes and 11 sweet crepes to choose from! Oh my! Plus there were also other brekkie choices should I change my mind and want something more eggy like an ABT Omlette or Creole Hangover scramble.

My bf and I headed over there around 11 in the morning. I braced myself for 20 minutes of driving around looking for parking but was pleased to find out that there were plenty of metered spaces on Robertson and 3rd Street. BTW, Creperie valet is $4.50.

Before noon on a Saturday morning, the place was surprisingly empty. Meaning that there were still ample empty tables on the outdoor patio (unheard of in WeHo) and lots more free seats indoors as well. I chalked it up to the very hot morning and the fact that it was Saturday. For some reason it seems like more people do breakfast and brunch on Sundays than on Saturdays. 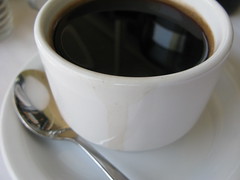 Even though it was really warm outside (yes, it’s the third time I said it), I wanted to sit on the patio since I rarely get to do that. Oddly enough, though, there still wasn’t any relief from the heat even though we were sitting in the shade. Twas because there wasn’t even a breeze. At one point I looked up at the outdoor heater I was sitting next to to check if it was on. I ended up ordering the French-pressed coffee ($3.95) anyway to split with the bf. Heard drinking hot coffee is great for relief from the heat. But then I also asked for a glass of water and some of their homemade peach lemonade.

The coffee was nice and dark and not silty-tasting at all, something that I usually experience with French-pressed java. The peach lemonade tasted more like peach juice than lemonade as it wasn’t tart. Rather, it was sweet and reminded me of peach nectar but without being syrupy. It seemed like they used lemonade as a base but that was it. Since it was a hot day, I sucked this puppy down and to my surprise the waiter came out with another glass of peach lemonade. “Did you order one, too?” I asked bf. “No, that’s the refill,” said the waiter. Weirrrd! They refill lemonade here? Usually restaurants charge extra for stuff like that, especially if it’s “homemade.” I wondered if they refill orange juice, too. THAT came in a tiny tumbler.

For my brunch dish I ordered The Big Easy which is country ham, mozzarella cheese, mushrooms, scrambled eggs and sherry cream sauce in a whole wheat crepe ($9.25). It sounded hearty and satisfying and it was. The sherry sauce lent a subtle taste to the dish, serving more to make it easier to eat and not dry. I kinda wished there was a bit more sauce, though, cuz it was a bit dry. And plus I love sauce. The great thing about this dish was that even though there was country ham, it wasn’t salty at all. My bf and I dug into our crepes (he had ordered the same thing) and didn’t talk for awhile. We were hungry and these things were sooo yummy. I occasionally came up for air to wet my palate with the coffee, iced water and peach lemonade. 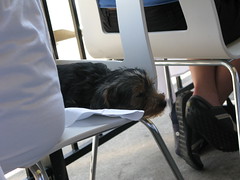 Later two Harajuku girls sat at the table next to ours. They had their trucker hats sitting high on top of their heads and a Yorkie lap dog in tow. Wasn’t that sooo Paris Hilton circa 2003? Oops! Now I’M judging. Must be this area. Anyway the poor dog was all wilty from the heat. They didn’t even give it water. Hm. During the course of their meal, one of the girls ran across the street to her car. But she was too late. The parking enforcement guy was already writing up the ticket for her apparently expired meter. She walked back to her table, defeated and sniffly. Was she really crying over the ticket?

Done with our crepes, I convinced bf to split a sweet crepe with me. He let me choose but I was torn between the Clare ($7.95) — Nutella, bananas and strawberries — and the Lucky Number Seven ($8.25) — caramelized pears, almonds, hazelnut liquor (I think they meant “liqueur”) and chocolate sauce. Guess which one I ended up going for? Yes, “7” is my lucky number, too.

The waiter had suggested we order it a la mode because the ice cream “would cut the taste of it.” So we took that to mean that the crepes were really sweet and rich where we wouldn’t be able to finish it. But that wasn’t the case at all. At least, not for me (I had saved half of my savory crepe to make sure I had room for “dessert”). I ended up finishing it where my bf left off. It was soo yummy! I loved this unusual combo for sweet crepes — pears and hazelnut! 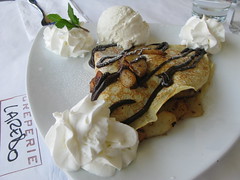 After that I sat back, stuffed to the gills, and rubbed my huge food baby belly. Man, that was excellent. I was happy. I found another breakfast spot to add to my list of favorites. I would definitely come back again. But probably try for an off day again as I liked this easy parking, easy seating experience.

Apparently, the restaurant serves dinner as well, closing at 10pm on weekdays and 11pm on Fridays and Saturdays. But I like to avoid having dinner in the hustle and bustle of Robertson Boulevard. So I’ll stick to brunch and perhaps even lunch.