My To-Do List: Places To Check Out for Cocktails 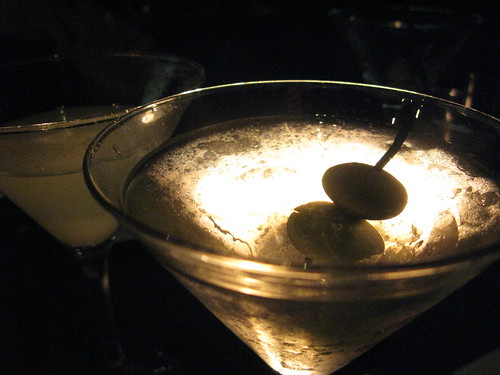 I’m sooo behind. Blame it on age, my incurable laziness, or the sprawl — so many bars I have yet to check out and I’m not only talking about the new ones. Yeah, slacker. Anyway, here’s my new list. If you’ve got some suggestions of your own, shout ’em out please!

Beso: Ya, I know. When I heard Eva Longoria was co-owner of this new WeHo restaurant, I was unimpressed. Another celebrity-owned restaurant? Puh-leez! But then I heard they’ve got a muy impressivo cocktail menu created by Beso co-owner/culinary celebrity Todd English and Alex Straus, student of mixologist Sasha Petraske (owner of NY’s well-known cocktail bar Milk and Honey). Oh my lorrd! Let me at it. My strategy is to go on a weekday night, preferably at the start of the week, in order to avoid the crowds of look-at-mes.

Bond Street Beverly Hills: OK, there’s probably no way in hell I can afford this place but when I read about it I was almost willing to take out a loan just to try out the libations on the cocktail list of the swank upstairs lounge. One Yelper described the list as “more impressive than the [food?] menu and offered some interesting and delicious specialty cocktails. There were quite a few combinations with different fruit juices such as grape juice or pear juice.” Maybe one day, when I’m feeling fancy…and I sign a huge book deal I’ll give it a shot.

Comme Ca: Nope, still haven’t returned to try out their cocktail list. Was put off by my first experience there last year when I was practically run over by some up-and-comer who wanted to beat me to an empty barstool. Biatch! Anyway, I was told that it’s best to go on Wednesday and that I can even call ahead for a seat at the bar. I think I’ll skip the specialty cocktails and go straight for the Dealer’s Choice, when the bartender creates a custom cocktail to suit your taste.

Father’s Office II: I’ve sworn off the Santa Monica FO location for its ridiculous lines and every-man-for-himself seating arrangement no matter how many times I’ve craved its cheeseburgers and fries. Fortunately the Culver City FO is bigger! Hopefully that’ll make it easier for me to actually enjoy a fancy beer with some friends instead of being squished up against the wall and fighting bad acoustics to have a conversation. FO II has 72 beers and a wine list and I heard that in terms of hard liquor, they’ll only serve the good stuff.

The Hall at the Palihouse: Enjoy a cocktail at the lobby of this newish extended-stay hotel in West Hollywood. Apparently they mix the drinks for you at your table/seat in the lounge. And the cocktail menu even includes the drink recipes. So nice! Some of the cocktails listed are “a margarita made with grilled-grapefruit juice, a ginger-cognac lemonade, and a cucumber-lime-vodka-wine combo that sounds delicious…” (from Metromix)

Medusa Restaurant and Lounge: Not crazy about the name but at least its happy hour (Tuesday through Sunday 5-8pm) sounds cool: $4 draft beer, $4 well drinks, $6 martinis and half off lounge menu. Their cocktail list is flavored-vodka heavy but there might be some gems in there. For instance, the Peargasm with Grey Goose La Poire, amaretto, simple syrup and sweet and sour.

Verdugo Bar: When all my email subscriptions seem to unite to promote one new bar, it’s like the stars aligning and the universe saying that I need to pay attention. Such was the case with Glassell Park’s Verdugo Bar. No specialty cocktail menu to be seen but apparently there are lots and lots of beer…beers from all around the world. Only problem is that the hours seem to only be from Thursday through Saturday 8pm-2am meaning I only have Thursday to check it out since I hate barhopping on weekend nights.