The Griffin: Go to the Light! The Light! 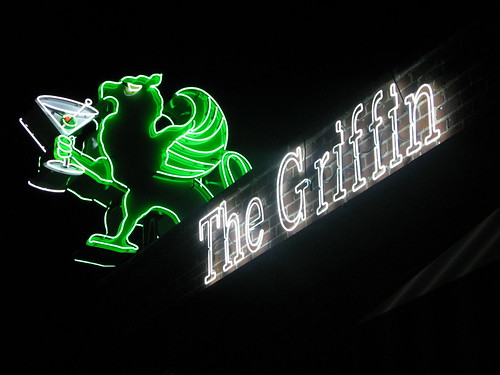 My new favorite bar? The Griffin in Atwater Village. Friendly staff (even the bouncer chatted with me and smiled nonetheless), great drinks, lots of seating areas, a jukebox! and tater tots. If you need more than that, read this:

I went there last night to catch up with a friend who lives in the Los Feliz area. She had recommended this bar down the street from the Bigfoot Lodge that had a huuuge neon sign. Later I came to discover that the sign belonged to the Griffin, a bar that opened up last year that I had kept meaning to check out but never got around to. Suffice it to say, I was delighted to go.

We walked in at the tail end of happy hour and the place was kinda dead but beautifully so. The dark interior reminded me of

the Chalet in Eagle Rock or more like a chalet what with fire pits, low-light lanterns, high vaulted stone ceilings, framed paintings on the wall, plush leather seating areas and heavy curtains. Despite the abundance of places to sit at this early drinking hour, the cushy bar stools at the bar had our names on it. 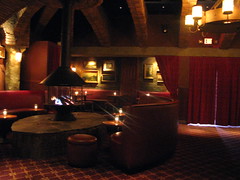 At that moment the bar’s manager, Stephen, a friendly, chatty fellow, was slinging the drinks. We asked him what was the deal with happy hour. $1 off all drinks and there’s a food menu, which itself is only available from 5-9pm.

Yup, they’ve got food here. Only thing was that today they weren’t serving food because the chef’s kid was sick or something unforgivable like that. H’well! Twas a shame, too, because their food menu looked awesome: corn dogs, chicken strips, mozzarella sticks, grilled cheese sandwiches, tater tots and pizza to name my faves.

The Griffin has a full restaurant-size kitchen in the back but Stephen said they only really use it to prepare the food and to cut up fruit for the drinks. But what’s cool is if you happen to come in at a time when the kitchen is closed, they let you bring food in from outside. I don’t know if this applies to all hours but during this food-less happy hour, there were patrons at the bar with their Del Taco takeout (DT is located next door). I really wanted me some tater tots, though. Hrm.

Stephen made it up to us, however, by making us some potent and tasty Manhattans. I felt a strong buzz coming on halfway through my cocktail. Nice. We asked if there was a specialty cocktail list and he said 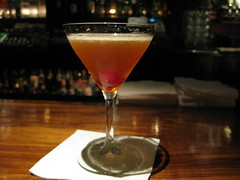 that they were working on it. “When do you think you’ll have one?” I asked, eager. “Well I don’t want to give a set date because then you’ll expect it,” he replied. But he promised to let me know when they finally come out with one.

In the meantime, we just ordered up his own specialties, that Manhattan followed by a Pear Lemon Drop. This latter drink was just OK, though. The pear flavor tamed the tartness of the lemon, not necessarily a bad thing, but it just left the drink tasting kinda plain. I was thankful that he didn’t cover the cocktail glass rim with sugar but also thought, in this case, a bit of sugar might have helped. Instead he simply garnished it with a thick lemon wedge. If anything, though, the drink was stroonng. I overheard the other bartender tell a customer that they get a little happy with their pours. Always a good thing. FYI, for four cocktails, our total was $32.

To pass the time, Beth and I commandeered the jukebox discretely located on a wall near the restrooms. Fifteen songs for $5! I played everything from ELO’s “Don’t Bring Me Down” to Goldfrapp’s “Ooh La La.” It was awesome. Yes, I said ELO. I love me some jukebox action. 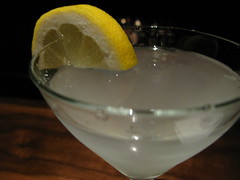 After we ran through our whole music repertoire, we decided to stumble over to the Tam O’Shanter Inn next door to see what they had in the way of food. Unfortunately, we missed the kitchen hours by half an hour.

So Del Taco it was. While we walked past the Griffin again, I had to take pics of that big beautiful neon griffin sipping a cocktail. Stephen had told us that that sign may have to go away. Apparently neighbors across the street from the bar have a problem with it. Think Kramer vs. the Kenny Rogers Roasters sign. Too bad. That griffin sure is snazzy.

We then returned to the bar after enjoying the cuisine at Del Taco. I sipped on some ginger ale while Beth enjoyed the other bartender’s specialty, a little drink the bartender called the Kama Sutra. When she described it to Beth it sounded ultra sweet what with peach schnapps, Malibu Rum, and pineapple and cranberry juices. But it actually tasted pretty damn good, reminding me of tropical drinks in Waikiki. Not too syrupy; just right if you like cocktails like Mai Tais and rum punches. Don’t know why she named it the Kama Sutra, though.

While Beth worked on her drink, I took in the scenery. The wall behind t 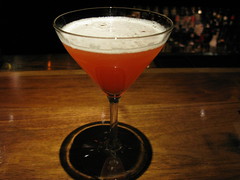 he bar displayed an impressive selection of liquor like Laphroaig and Red Breast whiskies. For beer on tap, they had Staropramen, Stella, Hoegaarden, Peroni, Newcastle and Bass.

The bar scene was cozy. At 10pm there were more people now. Groups lounging around the fire pits, couples snuggling in dark corners, smokers enjoying their ciggies outside on the covered patio. And apparently there were still more areas to fill — another whole bar area located near the hallway to the bathrooms was closed off but I could see the full bar there; and there was also a flight of stairs that was blocked. Perhaps to an upstairs area?

Beth and I were supposed to hit the Bigfoot Lodge after but ended up spending the rest of the night at the Griffin. We just couldn’t tear ourselves away. “You’re so lucky you live near by!” I whined to Beth. Seeing as how I live on the Westside, I can’t frequent my new fave bar as much as I’d like. Boo. I definitely have to come back for those tater tots though.

More pics of happy hour at the Griffin.