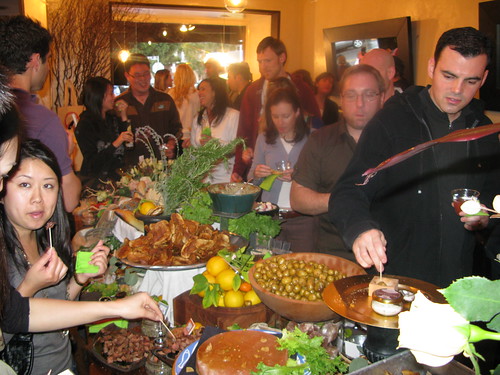 At the Saltistry party at Food Court LA on Monday night, everyone gathered around the long table at the center of the room, slowly moving around it clockwise and sampling the salty buffet that lay before them. Some folks lapped the table a couple times before adjourning to the bar at the back for some “saltails” (salty margaritas, Bloody Marys, Salt Dogs and Coronitas) while others circled several more times until they had their fill. 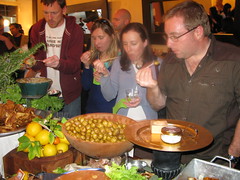 It was a site to behold — a food event set up like this where people ate where they stood. There weren’t plates you can pile stuff on and then take to a table to sit down and enjoy. Nope, rather, you picked up your bite o’ food with a toothpick or hand and dipped it in or sprinkled it with salt and then moved on to the next food display. Grazing foodies.

We all packed into this midcity restaurant on scenester-infested Third Street to celebrate Saltistry and all things salted with sea salt. There was Albacore tataki on a pink Himalayan salt plate, roasted pee pee potatoes with truffle salt, watermelon and cataloupe with coconut black salt and sea salt caramels with lavender gray salt (soooo yummm!). These were my faves.

first to run out. “I think someone just stood there and shoveled it into their mouth,” Joni, one of the two ladies behind Saltistry, joked as she mimed shoveling toothpicked-speared food into her mouth. And it seemed some people actually did do that at certain displays. Eesh.

The event was scheduled from 6 to 9pm and Joni and her biz partner, Denise aka “Dee,” were worried that they would run out of food. And with all the people swarming the table without any let up and even more people streaming through the door, they had good reason to worry. As for myself, I could only make two and half passes around the table before I was suffering from salt overload. 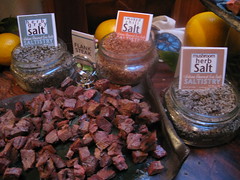 I think I salted with too much gusto when only a smidgen of seasoning would have been sufficient. But I’ve never tried these kinds of salt before: tangerine salt, heirloom tomato salt, mushroom herb salt and smoked salish salt (which we sprinkled on dark chocolate). I went crazy with greed and then I felt sick. “I think I’m going to be really bloated tomorrow,” said my friend Shelley, who also overdosed. “No, you won’t,” Joni said. “Sea salt is good for you!” But then why did I feel so blech? I couldn’t help but wonder. Maybe it was the salty margarita and salty Coronita (petite Corona) that I drank?

“Want another potato?” Shelley asked, hoping that food would make me feel better. I snatched the delectable potato she dangled from a toothpick and popped it into my mouth and then gagged. “You put salt on this?!” I guess I said that a little too loudly as the people standing nearby looked at me funny. Yesss, I know it’s a salltt eventtt, I wanted to say to them. But, yeah, I was done with salt. At least for the moment. Fortunately there was some “spa water” — pitchers of water filled with fresh cucumber slices — available at the bar, but they didn’t make me feel all that much better.

So I slumped against the leather bench that ran the length of the restaurant’s wall, waiting til Dre and Shelley, who accompanied me to this event, were ready to leave (read: felt they got their $25’s worth; 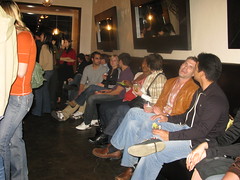 that’s my girls). Fortunately before my salt blues, I was able to get some socializing in, chatting with Tara de Lis, city editor of CitySearch, and John from Social Domain in addition to Joni (pronounced “Jah-nee”) and Dee. THAT was fun. Everyone seemed to be having a great time and I just couldn’t get enough pictures of people around the table oohing and aahing and puckering.

I asked Joni if Saltistry was going to have more events like this and she said definitely. So I made sure that she added me to their mailing list. As for the restaurant, everyone marveled at how great the space was for the party. I was surprised that they could fit so many people in there. And even more impressed that the two bartenders manning the busy bar were able to dole out the drinks at a steady rate so that thirsty patrons didn’t have to wait too long. Crucial at this event.

Dee was nice enough to snag me a food and drink menu for Food Court LA to take home. Apparently they have comfort food cuisine here. I’ve heard about Food Court LA since it opened six months ago but have never checked it out before. And now that I’ve had a look around, I definitely have to come back. There’s a full bar with a specialty cocktail list (drinks like strawberry basil cocktail, lychee cosmo and berry mojito); happy hour from 4-7pm with $5 apps and drink specials; and dishes ranging in price from the $5.50 house salad to the $15.95 Latchino steak with ancho chilies, cumin and ponzu sauce and served with roasted potatoes. And the banana blueberry spring rolls served with chocolate ice cream ($6.95) sounds like a dessert not to be missed.

More photos from the Saltistry party.