Last night I was charged with a very important task: Choose the newest cocktail to go up on Bar Lubitsch’s cocktail menu board. Ah me. Alchemia Vodka had asked the bartenders at the Old-Russia themed bar in WeHo to create a cocktail worthy of being BL’s new drink. And it had to include one of Alchemia’s flavor-infused vodkas — Wild Cherry, Chocolate and Ginger. I was one of five judges on the tasting panel. My cocktail compadres were Crazy Andy of LAist, Bob the marketing guy…and, um, two other marketing guys whose names I forgot. I feel terrible! But one was from Vegas. 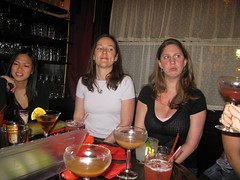 Anyway, I had invited some of my friends to “watch me do my thing” with the promise that they would get the winning cocktail for free after the contest was over. But as it turned out they got to drink all the cocktails that the judges didn’t finish, which was basically all nine times four (I think Andy finished his drinks). I only sipped the cocktails to get a taste of them but even then, at the end of the night, I had a nice little buzz going.

So the winning cocktail of the night was a little concoction called the Kinky Laska (Kinky Chick), created by a bar back no less. It wasn’t my first choice for the winner but the guys outvoted me. They thought the drink that I had picked to win, the Chekhov, was too sweet. Frankly at this point I think they were just really buzzed and only liked the name of the drink. Nyah! Also, Andy liked the idea of a bar back winning the contest. Turns out the Kinky Laska has similar ingredients to another cocktail already on the board but whatev. It’s made up of Alchemia Wild Cherry, housemade sweet and sour, lime, muddled mint and lime and topped with ginger beer with a brandied cherry garnish. Sorta tasted like a cherry mojito. 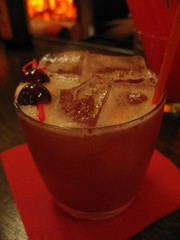 The Chekhov, the runner-up, had Stoli Vanilla (which was what the boys thought made it too sweet), Alchemia Wild Cherry, sweet and sour, pineapple juice, fresh strawberries and a brandied cherry garnish. Andy said that it was topped with champagne but I don’t remember that.

Yes, it does sound a bit too sweet but I assure you that it was not. It was light and refreshing and I felt it was a nice spring cocktail to add to the menu. Also it suited Bar Lubitsch’s menu the best in not only taste but name as well. The bartender had called it Chekhov in an ode to the playwright’s last play, The Cherry Orchard. Clever!

As for the other cocktail competitors (in order of Maybe to Meh):

Al Puccino: The bartender responsible for this ill-named cocktail wanted to make an alcoholic frappuccino for the bar. Despite the name I actually liked this drink made up of Alchemia Chocolate, Kahlua, organic cream, a shot of espresso and topped with organic dark chocolate flakes. It wasn’t sweet like most coffee/chocolate cocktails usually are and the espresso dominated the flavor of the drink making it taste like tiramisu. I couldn’t taste the vodka at all, which makes it a very dangerous drink but in a good way. I thought this would have been a good addition to the bar menu since there currently isn’t anything like it. But Andy had a point that this would be a better winter drink.

Ginger Pagne: I sorta liked this one with its mix of Absolut Mandarin, Alchemia Ginger, peach schnapps, sugar, mint and topped with Champagne. It was very strong. Loved the hint of orange and appreciated its simplicity. 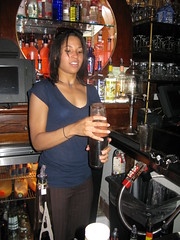 Ginger & Mary Ann: Alchemia Ginger, ginger beer, tabasco sauce, muddled honey, pepper, and lime, fresh ginger, horseradish, tomato juice, Worcestershire sauce, lemon bitters, sweet and sour, and garnished with pineapple and olive. The bartender created this as an answer to the Bloody Mary. Apparently when a customer asks for a Bloody Mary now, the bartenders have this bucket of ingredients that they throw together for it. I actually liked this drink even though I hate Bloody Marys but with the ginger vodka and the ginger beer I can see this being a nice hangover cure. Sometimes you just need a good burp and ginger is good for an upset tummy.

Monte Carlo: This had crushed lemon, orange and strawberries with Alchemia Ginger, fig vodka and champagne. Sounds interesting on paper but wasn’t all that impressive to drink.

Cadbury: This was the bartender’s drinkable version of a Cadbury bar with Frangelico, blueberry and Alchemia Chocolate. Meh. I just don’t like berries and chocolate together unless it’s an actual dessert that I’m eating.

Russian Roulette: This is another coffee drink but wasn’t as potent as the Al Puccino. Rather, it ended up tasting like an iced coffee that someone left out on a hot day. It was so watered down. The bartender had used a shot and a half of espresso, Alchemia Chocolate, cream, sugar and then garnished it with a strawberry rolled in crushed Thin Mints. This drink had too much going on and at the same time didn’t make much of an impression other than the fact that it left a bad taste of Thin Mints and strawberries in my mouth.

Stone Love: This was simply Alchemia Chocolate and Baileys on the rocks. Nuff said.

Other photos from the cocktail competition.