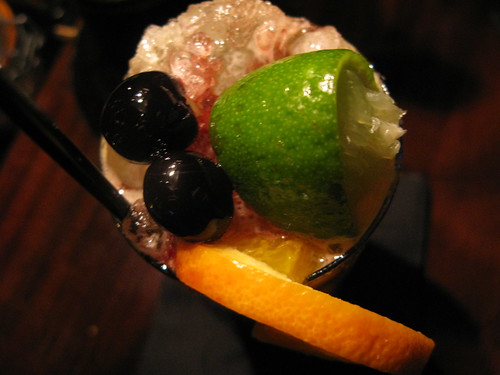 The boys at Seven Grand have been promising me a new cocktail menu forever so finally I dropped by the downtown whiskey bar to see what was the hold up. It’s now spring, time for those winter cocktail drinks to go!

I grabbed a bar stool on Damian’s side of the bar and he immediately set to work. But then bartender John jumped in as well. They were going to make me cocktails that would have been on the new cocktail list…if there was going to be one. Turns out there might not be one after all. Or not just yet anyway. I guess Cedd wants winter to stay longer or something.

But the following six drinks are brand-spanking-new and are the creations of not just Damian but John and I even was able to get one from Christine, the only female bartender at 7G whose skills the guys vouch for. There were a couple that I wasn’t too crazy about but three that hit the spot. 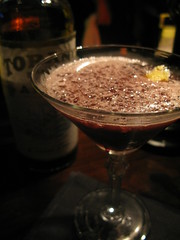 Amer Cocktail ($9): Damian created this cocktail with sweet Vermouth, housemade pomegranate grenadine and Torani Amer, a substitute for orange bitters. At first sip this grape juice-looking drink is sweet but then it has an aftertaste that sorta reminded me of soy sauce. It wasn’t terrible, it just didn’t leave much of an impression amid the other drinks.

7 Sins ($12): Rye, Applejack, pomegranate grenadine, lemon and cinnamon, John said this cocktail is a derivation of Ward 8. He garnished it with a cinnamon stick that he had doused several times in 151 and then set aflame. Nice! I always like a bit of pyrotechnics with my cocktail. He blew out the flame and then stirred the stick into the drink giving it a subtle smoky and spicy flavor. It tasted like berry juice and was definitely sweeter than the Amer Cocktail. The pomegranate grenadine left a sort of astringent sensation at the back of my tongue.

Arrack Punch ($10): With the ingredients of Rhum Barbancourt white rum, lemon, orange, pineapple, simple syrup, honey and Batavia Arrack, a type of rum, I thought for sure this would be a very sweet rum punch. I was so wrong. It wasn’t sweet so much as it was smoky. Not kidding. When I breathed out through my nostrils it smelled like smoke. I had to tell Damian that I didn’t like it. To which he replied that it was an acquired taste. Apparently the unusual flavor is the fault of the Arrack which is aged in teak, whatever that means. Maybe that makes it woody-tasting? But the drink itself is a derivative of jungle juice in Bali, which is big with the young folks there. 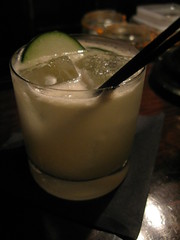 Tequila Massage ($14): Made with muddled cucumber, grapefruit, lime, honey and blanco tequila, I thought for sure I’d hate this cocktail created by John. I don’t like cucumber or grapefruit and I’m not all that crazy about tequila. But shockingly, this was my absolute favorite drink of the bunch. It was surprisingly sweet and very smooth. It’s the perfect spring cocktail because it’s so refreshing, sorta like spa water. Great drink if you want something other than a whiskey cocktail.

Black-Eyed Susan ($12): Christine brought this cocktail to 7G. The bar already serves the Kentucky Derby’s traditional drink — the Mint Julep — so why not offer the Preakness’ cocktail as well? With the cherries, orange slice and squeezed lime wedge, it’s definitely the most garnished drink I’ve seen here. And it’s also the sweetest cocktail of the bunch, tasting like a lighter tropical screwdriver as it’s made of Mount Gay rum, vodka, pineapple and orange juices and Cointreau.

Cherry Julep: Damian emailed me the recipe for 7G’s newest julep since he forgot to tell me about it when I was at the bar. It’s made up of Martin Millers gin, Amarena cherry syrup, Luxardo maraschino, mint and mint syrup all on crushed ice in a julep cup. He adapted the recipe from The Esquire Handbook for Hosts (1949) and he says it turned out delicious. I can’t wait to check it out. The cherries remind me of cherry blossoms which, of course, signify spring.

Again, you won’t find these new cocktails on the printed drink menu at Seven Grand but you don’t have to wait to see them on the table toppers to order them as I was assured that all the bartenders there know how to make ’em. So at the moment it’s like a special secret. But hopefully they’ll get official soon.