Auntie Em's Market Dinner: Down Home in the City 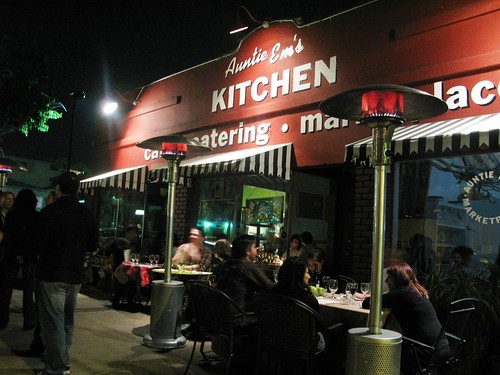 I’ve been trying to do Auntie Em’s market dinner ever since I first heard about it but it always books up SO fast. They don’t really publicize the event, ‘cept on their Web site and to their loyal followers on their email list but it still sells out every time. Fortunately by some stroke of luck I was able to get into last Wednesday’s “early spring farmers market” dinner. Chef/owner Theresa “Terry” Wahl actually reads/read my blog and so made some room for us! Yay!

So Auntie Em’s $32 prix-fixe dinners are special because they happen so infrequently. The Web site says “monthly” but our waiter had said he’d be happy if they did at least three this year. You see, Auntie Em’s isn’t usually a dinner restaurant. Breakfast/brunch? Yes. Cupcakes? Yes. But rarely dinner.

Terry doesn’t even prepare a menu until she shops the local farmer’s market. Yes, every ingredient in the dinner is fresh from the farmer’s market. So she goes to the market and sees what’s in season and creates the five-course dinner menu from that. Talk about

When we arrived a bit tardy to the 8:30 seating (there’s a 6:30 seating, too, but they encourage people 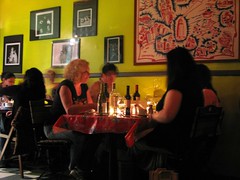 with children go to that one), they were setting up our table. For some reason, they had our reservation down for three people. As the evening progressed, I had wished that we actually did have more people in our party as all the tables around us were filled with groups of friends. It felt like we were the only couple there.

I began to learn that this market dinner is best suited for an occasion with close friends, more so than a romantic event for two despite the candlelight setting. Not that I was bored with my bf’s company. Just that everyone else had brought their own bottles of wine (there’s no corkage fee here) and seemed to have such a great time kicking back, eating, sipping and chatting. I was so jealous.

We, on the other hand, didn’t bring wine even though Auntie Em provides wine pairing suggestions from Colorado Wine Company on its menu listed on its site. Instead I ordered a glass of house red, 2006 Syrah. Yup, they have wine for those who didn’t plan ahead. It’s $9 for a glass of red and $36 for a bottle. Sorry, didn’t catch the price for white but it is slightly cheaper.

The waiter came by and asked us if we just wanted to hang out some more or start. I thought that was so cool that he asked that. Usually when you go to a restaurant they want to move you along and out the 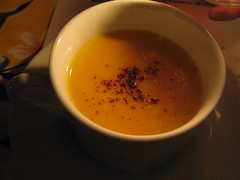 door. But here, it was very chill. No rushing and at the same time no lagging.

Our starter was the orange-scented carrot soup. We marveled how even though it smelled a bit like orange, the creamy soup only hinted of OJ and was subtly sweet. It was so delicious that we held up the bowl to the candle to make sure that we got every last drop.

Next up was a salad of baby greens and baby arugula with asparagus and lemon garlic dressing. There was even a beautiful and yummy edible flower included for that springtime touch. We enjoyed the dressing and the tender asparagus but felt the salad would have been extra special had they included nuts or berries to give it an extra texture. But it was tasty all the same.

For the main dish, I couldn’t make up my mind between the braised beef and the wild mushroom lasagna. But when I asked the waiter for more info on each dish, he actually called another waitress over to tell us all about ’em. (Apparently she had worked the market dinner the night before while he just learned about the menu this night.) The waitress described the process of braising the beef so theatrically and with such joy that I had to order it. The beef is cooked at a low heat for a long period of time. The result is oh-so tender meat that you can cut with a fork. 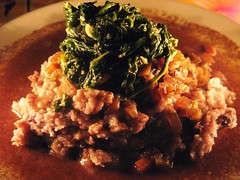 I kinda wanted to see if the mashed potatoes were really purple since they were made from purple Peruvian potatoes, but the light was so low in the restaurant, almost “dining in the dark” dark, that I really couldn’t see anything I was eating lest I held the tealights to them. Ah well, it was yummy. The meat, the sauteed spinach and mashed potatoes were all the same soft mushiness so it was easy to just dive in.

Thing is at this point I was getting full and I knew that we still had two more courses to go. So I ended up boxing up half of it. Which was perfectly fine as it warmed up and tasted just as good the following day at lunch.

My bf ended up ordering the wild mushroom lasagna with bechamel sauce. This reminded me of the white sauce lasagna I once had at La Bottega Marino in West L.A. which was really yummy but overly cheesy. This one seemed tasty, though, as evidenced by the fact that bf polished off the entire plate.

Next up was the cheese course comprised of Hooks’ 10-year aged cheddar, St. Pat organic seasonal cheese and Cypress Grove Creamery Lamb Chopper along with slices of bread and a sprinkling of dried fruit and nuts. This was fine but at this point I just wanted to get to the dessert: almond cake with strawberry lavender compote. 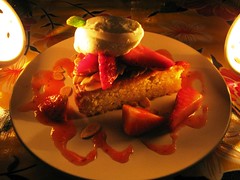 This arrived at our table looking so fresh and pretty but part of me was reluctant to dig in. I was soooo stuffed! And didn’t know if I had room for anything too sweet. So I eased into it by eating one of the strawberry slices first. “The strawberries are so fucking good!” I found myself exclaiming suddenly. My bf laughed but agreed. The compote was sweet but not syrupy. Perfect with the almond cake which was mildly sweet as well but flavorful.

It had more of a cornbready texture and was denser than, say, a layer cake. It evoked a very Italian dessert and reminded me of the strawberry cookies at Tender Greens in Culver City where they were bready almond cookies with a strawberry icing. Yum!

So even after we licked our plates clean, they didn’t rush us out. In fact, looking around at the other tables, everyone else was just hanging out as well. Chef Terry stopped by our table and we chatted a bit. I was able to find out that she pretty much knows everyone who comes to these dinners as they are her friends and regulars. In fact we couldn’t have a conversation without being interrupted by someone who wanted to stop by and say hi to her. It was so cool. It felt so neighborhoody.

THAT’s why these dinners always sell out so fast. I asked her how people who aren’t from the neighborhood or one of her peeps can find out when the next one is since it doesn’t seem like the market dinner page on their site lists the event date until last minute. And she suggested that folks email info [at] auntieemskitchen.com and request to be placed on the emailing list. So next time you’ll get the heads up right away without constantly having to check back at their site, which is what I did.

Oh yeah and I asked Terry why she decided to share her coconut cupcake recipe with the world. I figured with something like that (voted Sexiest Cupcake in my cupcake challenge) she’d be all secretive about it. But she shrugged and said that she wanted to put that out there for people who wanted to make their own cupcakes at home. One of these days I’m going to have to dust off my bakeware and try it myself.

So I really enjoyed our dinner at Auntie Em’s. The only thing I wasn’t crazy about was the uncomfortable chairs whose hardwood slats seemed to dig into my backside. But next time I’ll just make sure to bring a cushy butt pillow…along with my own bottle of wine and more friends.