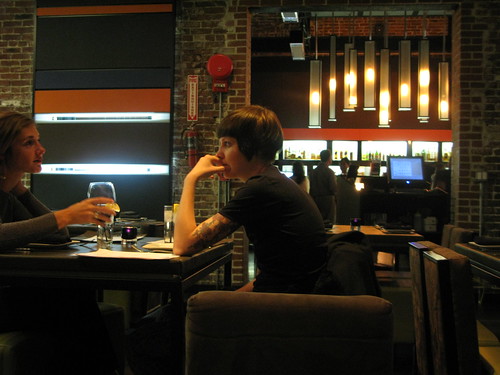 I’m a sucker for a specialty cocktail list, especially a cocktail list that has 35 drinks. My friend Nancy told me about NeoMeze’s cocktail menu and I had to check it out. Sure, this Mediterranean restaurant/lounge is way the hell across town from me in Pasadena but I couldn’t resist.

At first glance, it looks like there are a lot of girly drinks on the menu what with the use of juices, creamy liqueurs and flavored vodkas but there were also a few “man” drinks keeping them company. Serious drinks that were simple but sounded tasty. So it was for those drinks that I slogged through an hour and a half of crosstown traffic. 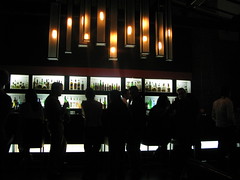 NeoMeze is located off Colorado Boulevard in Old Town Pasadena, a block down the street from the Cheesecake Factory that all the tourists go to. Fortunately, you have to duck into an alley off the Colorado main drag to find the entrance for NeoMeze. And when you pass the gelato shop and the watch store you walk into this airy but dark lounge. A full bar sits on your left, lots of low couches lay before you and the hostess stand for the restaurant is on your right.

Since I was here to take pictures of lovely cocktails (and drink ’em) I wanted to sit in the dining room which had a bit more lighting. This was a good move considering that there was a very large and very loud group of friends taking up the couches in the lounge. Through the course of the evening they got so loud that we wondered from our seats in the dining room if they were now doing keg stands. 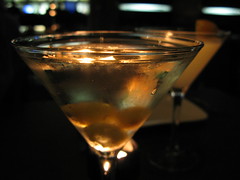 In any case, I studied the cocktail menu and decided to try the French Grape cocktail ($12) first. I had sampled a similar cocktail at Fraiche and loved it and wondered how different this one would be. Made of Ciroc Vodka and white grape juice with three frozen grapes, this was one of the more simple “girl drinks” on the list.

I categorize it as a girl drink because of the grape juice. In any case it was soo light. The grape flavor was subtle but I liked it like that. By the time I got to the frozen grapes at the bottom of the glass, they were just merely cold but still delightfully refreshing and juicy.

Nancy tried the Fig ($12) martini because it’s not something you usually see on cocktail menus. I was skeptical of its ingredients of Kleiner Fig Vodka, Cointreau, lychee and pineapple juices with fresh figs — blech, sounded too sweet! And it was! Fortunately, Nancy likes her cocktails sweet. 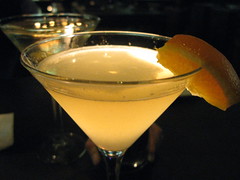 But apart from that I couldn’t taste any fig at all. If anything this drink should have been called The Exotic Mama or something because I could only taste the lychee and pineapple juices. Plus there was nary a fig to be found in the cocktail. They had used an orange slice to garnish the drink they served us because they ran out of dried figs. And there weren’t any fresh figs either since they’re not currently in season.

The next drink I ordered was the Old Blue Eyes. Being a huge Sinatra fan, I just had to. Thing is, this drink is $21 and it uses only one part Johnnie Walker Blue Label to two parts Bombay Sapphire Gin. Come on, Frankie was a whiskey man. At least it was good and strong though. Nancy took a sip and exclaimed, “I think I grew a little bit of hair on my chest!” If anything I think I’d settle for the Smokey ($12) which has gin and whiskey, too, but at least it’s cheaper.

Apparently, there will be a new cocktail menu debuting in a couple of days (the one I linked to above). Fortunately the restaurant is looking to add more “man” drinks to the mix so you’ll see the Smokey on there (it isn’t on there now, just had a preview) and a standard Manhattan as well as a Mediterranean martini (vodka with hummus-stuffed olives).

Also, just FYI, the restaurant has an extensive wine list that is put together by consulting sommelier David Haskell, former owner of the now defunct Bin 8945. Apparently David now has a lot of time on his hands so he occasionally shows up at the restaurant Tuesday and Thursday nights suggesting wine and food pairings for customers. Also, word has it that he might even create a wine flight for NeoMeze soon. Nice!