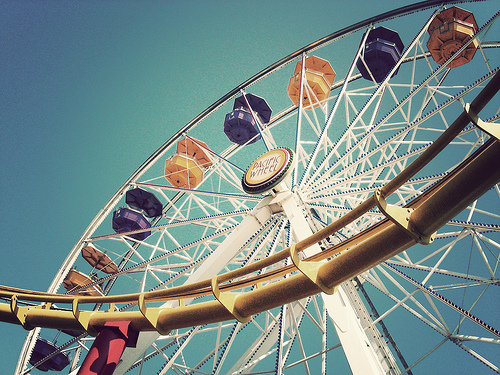 If you got a “Snow Day” from work, what would you do for your unexpected day off? That happened to me last Thursday when I got the call in the morning that our building had shut down due to loss of power and wouldn’t be back up til 9pm. Oh darnnn!

I was soo giddy when I heard that that I immediately jumped in my car and took off down the street until I realized that I didn’t know where I wanted to go. Since my roommate Dre and I work together, she had the day off, too. “Where should we go?” I asked her. “I don’t know. Where do you want to go?” she threw back. “I asked you first!” So finally I decided we should have breakfast at the Griddle Cafe. I just wanted to go somewhere that I normally wouldn’t get to go to on a weekday. And I was sure that since it was a weekday it would be easy to score a booth since everyone would be at work. Wrong! It was still busy and all the booths were taken. Who are all these people and why aren’t they at work?

Since it was already a strange day, I decided to order the egg white scramble with pesto, shrimp, scallions and capers. Sounded so weird as it’s something I normally wouldn’t order but fortunately it was pretty tasty. I felt stuffed but not disgusting. And then Dre and I split a neverending carafe of French press coffee. Lovely.

Then it was off to Main Attraction in Santa Monica where I wanted to get a mani/pedi. Since it was now lunchtime, the nail salon was already buzzing with pre-weekend appointments. I got my fingernails painted in OPI’s Chocolate Shakespeare (dusty rose color) and my toes in Mrs. O’Leary’s BBQ (brownish dark red). Pretty!

Dre said she wanted to go home to work out but I convinced her to go for a walk on 3rd Street Promenade. It was such a beautiful, sunny day and since it was Thursday it wasn’t going to be swarming with tourists and slow-walking lookie-loos. We stopped off at Vanilla Bake Shop for several cupcake babies and then went to check out the new Forever 21 store that took over the Gotham Hall space. That store is huuuge! Multi-leveled maze of disposable fashion. And it was so easy to get around. Hardly a line for the fitting room. No annoying teenage girls cuz…they’re at school. HA-ha!

Anyway, just picked up a cute but cheap electric blue dress for the Nintendo party I was going to later that night. And that party was the icing on my girly day cake. Lindsay, co-editor of LAist, invited 25-30 of her lucky girlfriends and colleagues to a loft on La Brea to play video games. It’s a party intended to get women interested in video games. So what they did was set up four areas in the loft where we could learn about and play four different video games on the Nintendo DS Lite. For every game we played we got a charm to add to the charm bracelet we received when we first arrived. The games were Nintendogs, Brain Age 2, Mario Kart and some puzzle game.

The Nintendogs was cute but I can’t see owning that game. Just couldn’t hold my interest. I played with the dog, taught it the verbal command to lie down, blew bubbles at it by blowing into the game console’s microphone and even took it for a walk. Later I found out that even though you get 400 fake bucks to start off with, eventually you’ll have to use your own real money to buy the dog food and stuff. No thanks! It’s not a real dog! I researched what other types of virtual pets are offered and you can buy hamsters and babies, too. Hm.

My favorite game was obviously Mario Kart cuz I like driving fast, even in make believe. And the game that made me feel stupid was Brain Age 2. You’re supposed to strive for a Brain Age of 20 since apparently that’s when the human brain is at its peak. What did I score? 78. Fortunately we got this game for free so if I just stick to a daily training schedule, I’ll be 20 again in no time.

At the end of this night of wine, lollipops (surprisingly no cupcakes, not that I’m ungrateful) and Wii Bowling, we were given our very own Nintendo DS Lite to take home! Eeeeee! I was soo happy. Even though the last game console I owned was a GameBoy back in 1991, I greedily snatched up the slim portable device that looks like a stylish clutch. Mine was pink.

Was that the perfect girls’ day off or what?

PS: I’m now officially addicted to my DS Lite — accessorizing it, buying new games and even taking it with me everywhere. I loves it sooo much! Thanks, Lindsay!