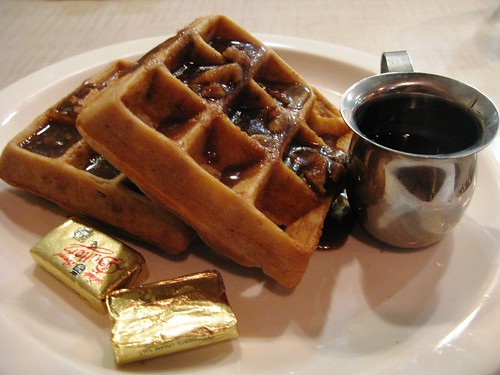 “hey, i wanna check out this new place daily candy wrote about today.the waffle. i checked out their menu and it sounds cool and they’re open til 4am on fri/sat nites.” My friend Shelley IM’d me this last week. I gave their menu a look-see, Googled them and found that not only Daily Candy wrote about them but LAist, LA Times‘ The Guide and Eater LA. “I can’t believe I found out about something b4 u!” she wrote smugly. “oh whatev. I find out about things from my friends,” I replied defensively.

In all honesty, I probably did see it on one of the above publications but discounted the restaurant because of its name. “The Waffle? Meh.” And I’m not so much into late night waffles anyway. Nope, the thing that really got me to put this new Hollywood diner on my list of to-dos was the fact that this 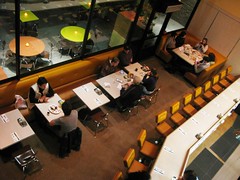 We immediately made plans for Monday night to avoid any weekend crowds or weeknight bar hoppers. A genius move considering we easily found a parking spot right around the corner in front of the Well. No $8 valet for us, thank you very much.

Walking into the restaurant we were welcomed by high ceilings, a lovely counter with orange leather chairs and many open tables. Shelley and I sat at the counter for the nitty-gritty experience of the bustling kitchen and chatting wait staff.

A waitress looking more like an Eastsider hipster than Flo from Mel’s Diner came up to us with menus in her hands. She was very helpful and friendly, answering all our questions about the food, the joint and the cocktails. Yes, there’s a special cocktail menu listing all the goodies that can be had at that upstairs bar as well as enjoyed in the downstairs dining area. I greedily seized the list but was a little disappointed to find a meh-sounding selection.

I know, shouldn’t expect innovative concoctions at a waffle restaurant. Instead, here you’ll find Pimms Cup and a Perfect Margarita as well as the standard chocolate martini, key lime 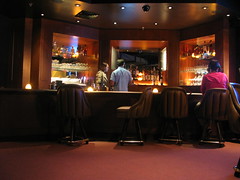 martini, saketini and a blueberry lemon drop to name a few. There are eight cocktails ranging in price from $10-$13 and eight $12 martinis.

I couldn’t get Shelley to have a drink with me. She wanted to save herself for the Hungry Cat where we were going to check out cocktails after the Waffle experience. So instead we just went upstairs to survey the scene. I think if we stayed to have a drink I would have tried the maple cocktail, which isn’t on the menu but the waitress told us about. Apparently they use vanilla vodka and some ginger to make it. Hmm, and that makes it taste like maple? Interesting.

So since we weren’t having drinks, we had food. The menu offered quite a selection of breakfast-focused items — scrambles, sandwiches, burgers, vegetarian specialties and, of course, waffles. 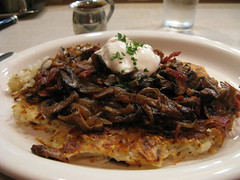 the savory goodness promised by those ingredients. I asked for a side of hot sauce but all that served to do was make it taste like bland potatoes covered in really hot sauce. Not happy.

Shelley was pleased with her order, on the other hand. She got the $6 two-egg breakfast which bacon and a bowl of fruit. That IS a good deal!

For “dessert” we decided to go with the sticky bun waffle ($8) instead of the pudding, the waffle sundae or baked hot chocolate on the dessert menu. We were here, we had to try a waffle. Shelley, a big Yelper, said how reviewers of the restaurant complained about how expensive the waffles are. “$8 for waffles?” they cried. Yeah, I can see how they’d look at these two smallish waffles and expect more for their money but 1) this is a restaurant smackdab in the middle of the Hollywood bar scene and 2) they bake stuff into the waffle as well. Eight dollars isn’t too bad.

So overall, the experience was pleasant. Wasn’t too happy about my food but maybe I just ordered the wrong thing. I did enjoy my chocolate malt and the service was great. I loved going when things were kinda slow. The waitress told us that considering they just opened, they were really surprised about how much business they were getting. I can only imagine how crazy it must be on weekend nights.

I don’t think I’ll come back for cocktails though. If they’re going to charge that much for drinks, I’d rather go to the Hungry Cat instead for their gourmet cocktails that are about the same price.