Dinner at Akasha: I Am Now a Vegan Convert 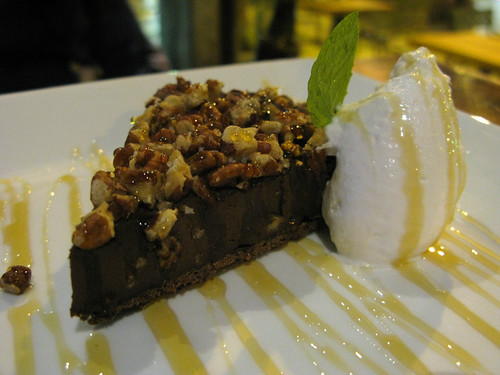 People who know me know that I am so not a healthy eater. Healthy in terms of reading labels, counting calories and treating my body as a temple. But regardless of the fact that the new green restaurant in Culver City, Akasha, serves organic and vegan fare, I was dying to check it out. I had to, they have a cocktail list. But what started as a casual visit with the intention of sampling some cocktails, maybe an appetizer and maybe a dessert, turned into a full-on dinner. 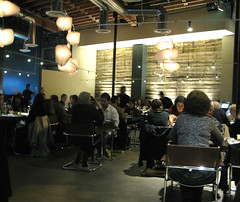 We even showed up at 6:30 on a Friday night without, gasp!, reservations. Fortunately we were able to score a table for two in the bar area that looked out onto bustling Culver Boulevard. The restaurant was not exactly packed but the hostess had said that the dining room was booked. We didn’t mind, though, since our tall seats offered us a nice vantage point of the dining room and bar.

The eco-friendly restaurant with its sustainable this and energy-efficient that would have seemed very cold with its concrete floors and exposed ventilation system on its ceiling had it not been for the soft gallery lights and the unusual chandeliers hanging over the dining tables. Still I was glad I was at the bar since the dining room chairs didn’t look all that comfortable.

Looking over the dinner menu, surprisingly, my cheapskateness wasn’t turned off by the prices (I usually like to stick to joints with dishes $15 and less). There were salads and pizzas but I scanned the big plates section of the menu for kicks. Most of the entrees were in the $20+ range (however there is 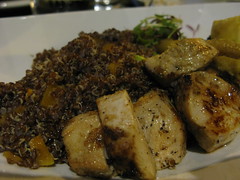 a turkey burger for $14) so I decided to get the red quinoa and edamame bowl with lemongrass chicken ($14). This was soo effin good.

You could get the dish without the chicken if you want to save some bucks, oh and are a vegetarian of course, but I highly recommend getting it with that chicken. That savory poulet is flavorful and tender and I can’t imagine having the quinoa and edamame without it.

I devoured my food so fast that you’d think I hadn’t eaten in days when in fact I had a bit of turmeric seared pears ($10) as an appetizer just minutes before. Sadly there were no leftovers to take home and enjoy at lunch the next day. Too bad the portions weren’t a bit larger.

My friend Erin went against her own frugal nature as well and ordered the $27 wild pepper crusted scallops served with forbidden black rice risotto, edamame puree and baby bok choy. She generously gave me one of her scallops but considering the price I only took half of it. That whole dish was fantastic as well and Erin didn’t regret splurging at all.

Now to why we’re here. For cocktails the menu ranged in price from $12-$14 and consisted mostly of vodka-based drinks. Of the bunch, the following sounded the most appealing to me for their uniqueness and ingredients.

I ordered up the Adam & Eve as I’ve never had a fig cocktail before. And I wasn’t disappointed. It was 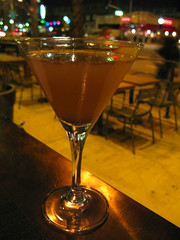 not overwhelmingly juice-y or as sweet as you’d think, nor was the vodka overpowering. Rather the cocktail was deceptively light and I felt buzzed halfway through the drink. There was no garnish as it seemed to only rely on the fig seeds as dressing. But I loved the cocktail and found it very difficult to sip and savor slowly as I wanted to just guzzle it.

The great thing about having this bar here now with its fab cocktail menu is that one could easily do a nice little bar hop on just these two blocks of Culver Boulevard, what with Akasha, Ford’s Filling Station and Fraiche lined up neatly on the same side of the street! Sayyy!

If you’re not so much into cocktails, the restaurant/bar also offers an extensive wine list. There’s also beer on tap like Stella and something called Peak Nut Brown Ale (both $7) or a variety of bottled beer.

With still room in my tummy for dessert, I went with the maple chocolate layer cake ($8) simply because I was curious about the chocolate hemp gelato it came with. The cake itself tasted very rich and was almost as dense as a flourless cake. I wasn’t crazy about its frosting and found myself wishing there was more of that equally rich gelato. I ended up envying Erin for her order of the salty chocolate tart ($8) which was made of sea salt, caramel and pecans with a dollop of soy vanilla bean chantilly creme. I LOVE caramel and sea salt! Next time, I’m so ordering that instead.

On our way out as we were passing the empty refrigerated cases of the bakery, we noticed the signs for the desserts. Both were vegan! “But they tasted so good!” I couldn’t help but exclaim. So does vegan food taste good nowadays? I guess it’s something I should look into.