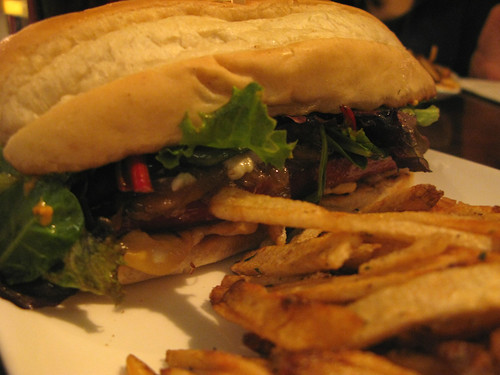 After a not-so-great brunch experience at the Boulevard Lounge, I returned but for dinner this time. I met up with my friend Nancy who then introduced me to the chef/owner Michael Bourseau, who never brought up that less-than-stellar review I gave his place that other time. But in all fairness, I was crazy about the food during that brunch, just wasn’t crazy about the lack of service and brunch drink specials.

This time I was here to check out their winter cocktail called the Naughty Toddy for a lil Metromix piece I was working on…and grab some dinner with Nancy and our respective bfs. At around 8pm on a Wednesday night, the patio/dining room was fairly quiet save for a jewelry party going on in the back room. Michael sat and chatted with us, regaling us with his recipe for his tasty, hot buttered rum toddy. After the waitress came by for the fifth time (we were too busy chatting to look at the menu), we were finally ready to give her our dinner order.

menu offered small plates, salads, sandwiches and hearty entrees. Prices for the entrees range from $15-$19 so I opted to get the more affordable gourmet hot dog dish ($9). I know, hot dog, ew. But the restaurant offers three different styles of grilled dog — Chicago, Italian and French — to help haute up America’s favorite ballpark snack. The French dog appealed to me the most with its caramelized onions, blue cheese, mayo, dijon mustard and champagne vinegar greens. Fan-cee!

While we waited for our food to arrive, Michael told us how he was actually the one who brought sliders, those mini burgers you see on some of the best restaurants’ appetizer menus, to L.A. from Chicago. And he thought it was funny how those fancy restaurants called them sliders considering the name is derived from White Castle’s famously delicious gift to the fast food world. Mmmm, White Castle.

Yes, Michael hails from the Windy City and even started a Cubby Club where a $6 membership fee entitles its members to half-price beer, Chicago dogs and burger twins during Bears, Bulls or Cubs game spectating at the restaurant.

When the food arrived, I didn’t recognize my nitrate-infused meat stick. It was enveloped in a fluffy French bread bun and camouflaged in leafy greens, grilled onions and melted cheese. It was only when I took a bite of the dog that I tasted that familiar savoriness. Damn that’s some good dog. Love the blue cheese and the tangy greens.

But I have to say that my absolute favorite part of that dish was the Boulevard fries that came with the hot dog. Appearing like fat fries sliced a bit thinner (Michael said they are hand cut), they were fried perfectly, crispy but not too crispy. And omg the seasoning. I couldn’t stop myself from stuffing my face while I was trying to hold a conversation at the same time. I never wanted my mouth to be without those fries. They had to be the best fries I’ve ever tasted. 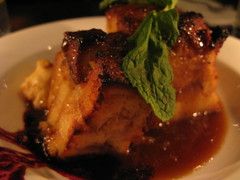 Surprisingly enough, after that oinkfest I still had room for dessert. Apparently they have a bread pudding with maple syrup ($8) that many customers have developed serious addictions to. “Mm hm, I’ll believe that when I taste it,” I thought. After that bread pudding fiasco at Simon LA, I was still shying away from bread puddings.

The dessert came out looking drenched in maple syrup. A pool of the syrup surrounded the pudding so it was swimming in it and a spill of blueberry compote stained part of the plate. The bread itself was warm and so sweet. My bf and Nancy could only handle a couple of bites of the sugary dish but I nearly finished it on my own. Now, THAT’s a bread pudding dessert. I can’t see being addicted to it but did enjoy its flavorfulness and delectable sweetness.

So yeah, my Boulevard Lounge experience this time was wayy better. And I only have one gripe: The dining room is also the porch area which, since it’s open to the outside, is where smokers also sit. So I had a difficult time trying to enjoy my meal through the scent of cigarette smoke. Blech! Cigarette smoke!

Unfortunately there aren’t many seats inside by the bar if you want to have a nearly smoke-free meal with several friends. And during the cold, wet night we were there, the plastic shades were drawn down all around the porch except on one end so the smoke really had nowhere to go. Oy.

Anyhoo, if you’re craving a late-night snack, the kitchen at the lounge is open til 1:30am. And bar and restaurant patrons alike can enjoy their libations and meals on the scene-y porch. There’s no “diners only” rule for the tables there. Just mind the smokers.