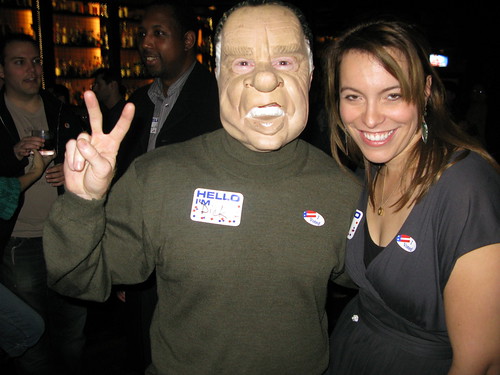 I hit the LAist Super Tuesday party last night at Seven Grand and had a blast. What a turnout! Apparently LAist readers have been itching to party together and with the LAisters for awhile now.

I think I only met two Republicans and they had happened on the party accidently, coming to Seven Grand for cocktails on a supposedly quiet Tuesday night. “I walked in and thought, ‘Great, a young Democrats party,” said one of them. “What makes you think they’re all Democrats?” I asked. “Because they were all cheering for Hillary and Obama,” he replied. Oh, there’s that.

I met a couple of LAist readers, too, who I’ll call V&V since their names started with Vs and I only remembered one of their names, Veronica. And did a quick interview with V about my experience running for an election. FYI, it was in high school and I had run for junior class treasurer. I used to wear a lot of black eyeliner back then so my campaign slogan was “The Eyes Have It.” Just as well I didn’t win that one since I’m horrible with money anyway.

But I chatted with LAist’s dreamy editor Zach who was very pleased with the turnout and projected more parties in the future (look for an LAist bday party in July and the election party in November). I met Sloane (pictured above with “Dick”), LAist lifestyle editor, who had organized the successful shindig. And of course, chatted with Crazy Andy, LAist news editor, about his upcoming dates with Caroline on Crack readers. Damian, my fave bartender, conjured me up a delicious Irish coffee and I got info about the upcoming St. Paddy’s Day party from Patrick the bar manager. “We’re going to have midgets and I’m going to dress up like a leprechaun,” he said excitedly. Well, okay!

The crowd sipped their cocktails and stared intently at the TV screens running the election numbers. After holding a bar vote about listening to music vs. listening to the TV, Patrick kindly turned off the jukebox so we could hear Obama’s speech.

Even though the party was scheduled from only 7 to 9pm, the crowd lingered into the late hours. Can’t wait til the next shindig.