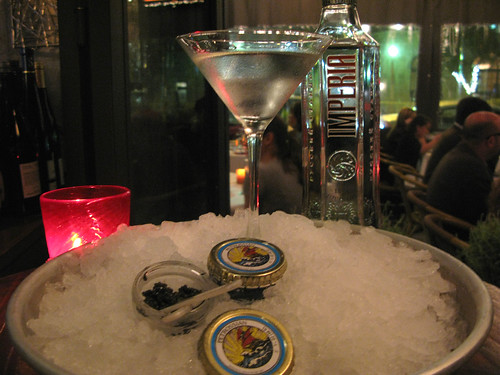 I usually don’t like vodka martinis, especially vodka martinis that cost $15 but there’s something to be said of Fraiche‘s swank, brand-new (it’s a week old) cocktail, the Imperia & Caviar. It’s unusual in its presentation and its ingredients and even though it seems so simple it’s like nothing I’ve ever heard of/seen/tasted before.

Renowned bar chef Albert Trummer, a resident of both L.A. and New York City, says he was inspired by NYC’s Russian community and Russian Tea Room when he created this unique cocktail that incorporates caviar in its mixing process as well as drinking process.

That’s right, you have to slurp a tiny teaspoon of caviar, which comes with the cocktail, right before you sip the martini. You get two tiny teaspoons to be exact. Of course you’d have to like or not mind caviar to really enjoy this cocktail.

I fall into the latter category but was more swayed by the luxuriousness of it all. “Ooh! Caviar! So fancy!” The cocktail shows up seated atop a small mountain of crushed ice on a silver platter. Two little containers of caviar accompany the cocktail glass, along with tiny plastic spoons. “You do this for EVERY person who orders this drink?” I asked Albert, wondering if he was just art designing a pretty picture for me. “Yes,” he said while sticking the spoons in the ice. Very extravagant, indeed.

And I was very surprised by how much I actually enjoyed the taste of this martini. No, it didn’t have a fishy taste. And unlike past vodka martinis I’ve tasted, this one was actually very drinkable. There was none of the harshness you usually get when drinking straight vodka but rather it was smooth and deceptively light. A tingling on the tongue followed instead of the bad aftertaste that accompanies most vodka martinis I’ve experienced.

Albert credits the Imperia vodka (a 2-year-old brand) which is created in the old Russian standard tradition. And if I could drink this cocktail without wincing once, you know it was some good stuff.

Fraiche’s cocktail menu is updated every month and a half to keep it “seasonal” and fresh, so you still have some time to order yourself this little bit of luxury.