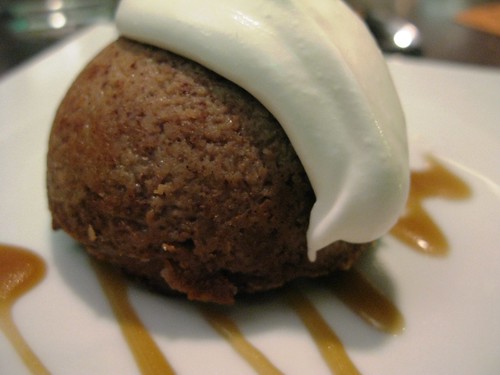 I don’t know how long I’ve been dying to check out Simon LA, Chef Simon Kerry’s restaurant at the Sofitel Hotel. If anything I wanted that junk food platter; those cupcakes, that caramel corn, and especially that huge cloud of pink cotton candy. Everyone knows Simon LA for its desserts. If you don’t want the junk food sampler, maybe you’ll want the vanilla bean creme brulee or the peanut butter fudge sundae, or, hey, how about that warm molten chocolate banana caramel pudding cake?

I guess that’s why my party’s extreme disappointment in our dessert was able to taint our whole experience of the restaurant, which up until that point had been very favorable.

I had arranged a girls’ night dinner at Simon LA using

dineLA restaurant week’s prix-fixe menu as an excuse to check out the restaurant. It would finally be affordable! And I figured if we still had room in our bellies afterward that we could order up a junk food platter to split among the six of us.

My Yelper friend, Shelley, and I showed up at the restaurant early — very early and we killed some time in the Stone Rose Lounge sipping $15 cocktails. (For the record, the cocktails are cheaper in the restaurant — $8-$11 vs. $15-$20.) When we finally went to the restaurant’s hostess stand to check in, my friend Nancy was already there.

The rest of our party was running 10 minutes late but the hostess sat us anyway. None 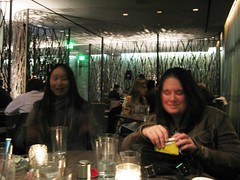 of that “You have to wait for the rest of your party to arrive to be seated” business. So refreshing!

The restaurant was dimly lit and reminded me of a magical winter forest with room separators made to look like bare winter branches reaching up to the ceiling. The candleholders at each table echoed those walls. There were probably about six or eight booths and a number of dining tables.

We were able to score a corner booth by the patio. Eventually the remaining three girls arrived oohing and aahing at the surroundings. It really is a pretty restaurant. And the buzz of diners wasn’t too loud.

Immediately we sat down and got to business looking over the prix-fixe menu. A lot of us ended up ordering the same things: the radicchio salad, the braised short ribs and that dastardly bread pudding. We were pleased with the salad and happy with the short ribs and flustered when Kerry Simon stopped by our table just when we all had taken a big bite of the oh-so tender beef entree.

He had come up to our table to make sure everything was OK. I had my camera on my lap and for a split-second thought about whipping it out to take a picture of him but felt too embarrassed. Instead I asked him something lame like why my friend’s portion was bigger than mine — which seemed to be half the size of hers. He joked that the cooks couldn’t see so well or something like that. 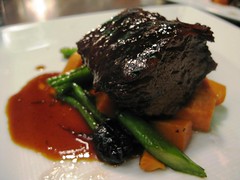 After he walked away, secure in the knowledge that we liked everything so far, we looked to see if he stopped by anyone else’s table. But instead he had walked back toward the kitchen. “Maybe he has an Asian fetish,” Nancy joked since there were five Asian girls in our party.

Regardless, we all felt a little star struck. Mei-Mei said she should have told him that she saw him on TV. I thought it was nice of him to come over. I like it when chefs do that. The rest of the night we saw him standing by the kitchen just surveying the dining room.

We were all having a good time and anticipated the moment when we would get our desserts. Five of us ordered the glazed doughnut bread pudding with salty caramel sauce, only Ally ordered the chocolate tart with lemon sorbet. “Sucker!” I thought. Our dessert sounded like the superior one of the three presented on the prix-fixe menu; the third offering was a trio of mini red velvet cupcakes.

I was looking forward to the uber-sweetness of the bread pudding. “Glazed doughnut with salty caramel sauce,” what could be more decadent? This wasn’t even something offered on the regular menu. It must be something special.

But after we all took that first bite of it we understood why. It was funny, I was busy trying to take pictures of the dessert since my macro function didn’t seem to be working on the camera and all of a sudden I hear all the girls complaining. Loudly. So I had to check to see what all the fuss was about.

I don’t think I’ve ever tasted anything blander, well, for a dessert that is. That bread pudding had an unappealingly dense but spongy texture and only an ultra-thin drizzling of “salted gooey caramel.” It was topped with creme fraiche, the blandest thing you could put atop a dessert. I couldn’t even finish it. In fact none of us could. So we did the unthinkable and sent them back.

I always hate doing something like that. If I’m not pleased with something, I’ll usually just stick it out since I’d rather do that instead of coming across as bitchy. But it was so bad that I couldn’t even take another bite. It’s not that it tasted bad, it’s just that it tasted like nothing. So very disappointing considering how sweet its name sounded. The girls were wishing that Mr. Simon would check back with us again so they could give him a piece of their minds. 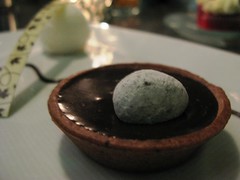 So three of us opted to order the chocolate tart and lemon sorbet instead, while my friend Bernadette went for the cupcakes despite reports that they were dry. The fifth girl was actually able to finish three-fourths of the bread pudding so didn’t order another dessert. The server was so nice about it all. Not a trace of attitude. It was like she understood our disappointment.

The chocolate tart was OK but we were so disheartened by the bread pudding that we couldn’t be excited about the second dessert and we didn’t even feel like ordering the junk food platter as was originally planned. I know, sad. It was an anti-climactic way to end the evening. The fact that it started with such promise and that everything up to that point was excellent — the service, the atmosphere, the first two dishes — and that it ended with such blah.

“You shouldn’t let a little thing like one bad dessert spoil your whole experience,” you’re all probably saying. But desserts are my thing! And the way I look at it, dineLA is a way for restaurants to reach out to diners who wouldn’t normally visit their establishment. High-end restaurants are more affordable, attracting the curious and cheapskate foodies like myself. Wouldn’t you want to showcase your goods to keep these newbies coming back? Why didn’t they offer a crowd pleaser from their dessert menu instead of create something for the dineLA prix-fixe menu?

BTW, I had heard that a tuft of cotton candy comes free with the dineLA dinner, so we were looking forward to that. But alas, no such luck and no such cotton candy.

I’ll have to plan one night to just try the junk food platter. Ferget dinner.