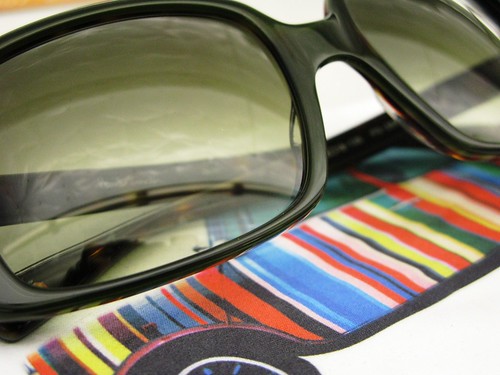 Nobody told me that Fred Segal in Santa Monica was having a fabulous 50% off sale! Arrrgh! It started last Friday and ends this Sunday! Fortunately I was able to steal away during lunch to check out the sunglasses section, Fred Segal Eyes, where it seems like EVERYTHING is half off. My co-worker is friends with the owner of this fancy-schmancy sunglass hut and recommended that I go see him if I wanted help picking out designer shades.

Apparently David Gonzales has an eye (no pun intended) for choosing which pair of sunglasses complements your face shape, etc. He’s wayyyy better than a fashion-savvy friend who you drag with you for their opinion since he’ll not only tell you when something doesn’t look right but he’ll follow it up with a pair that does. AND he’ll tell you why it does.

You can beg and plead for that Dior that you just loved on Jessica Alba, but if it don’t look right on you and David says so, you really should listen to him. The man has been with Fred Segal for 17 years and considers his knack for pairing people with spectacles a sickness. But he’s so awesome at his job.

When I went in today and told him I was looking for some new sunglasses, he asked if I liked plastic or metal, big or small frames. “Plastic or metal is good but I prefer big, just not TOO big,” I replied. He immediately grabbed a pair off the shelf behind him and handed them to me. It almost looked like he wasn’t thinking about it but then when he explained why he thought they suited my face, I realized I was mistaken. Anyway, that was the fastest, least painful sunglasses shopping experience I’ve ever had and that’s why he’s so awesome.

In the end I’m really happy with my purchase cuz I know they look really good on me. Heh. And they were a nice price ($143 sale, $286 original).

On a random note, I had lunch at Crescendo, the restaurant in Fred Segal, and even though the food was good (albeit overpriced), the service and atmosphere were HORRIBLE. Waiters clanking dishes and breaking water glasses, bumping unapologetically into our chairs and not being attentive at all. No water refills, no checking with us to see if we needed anything. They sucked. But at least my shopping experience was nice.