The Custom Hotel: From the Lobby to the Top Floor 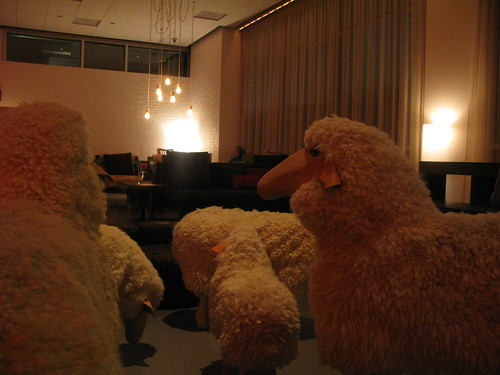 Looking for cocktail hour at a swank hotel in Westchester? Didn’t think so, but you might be interested to know that there is such a place. It’s the Custom Hotel, formerly Furama Hotel. That’s right, the one next to the bowling alley and the Ralphs.

The Standard-esque digs opened up late last year but its restaurant, Bistrotek, opened just last Saturday as did its pool bar/lounge, Hopscotch, contrary to previous published reports. At least that’s what Tammi, the hotel’s director of events, told me.

I had gone to the hipster boutique hotel to meet a couple of friends at the hotel’s lobby bar. Since the scene in the lobby was dead, we moved over to the bar in Bistrotek. At 8pm on a Monday night, the restaurant was buzzing with a party of designers and a couple of diners. Most of the spots at the bar were taken but we were able to find seats at the corner.

The cocktail menu was all vodka-based drinks, save for the mojito which was made with Bacardi Light. Erm. Fortunately, the other drinks didn’t sound too bad.

Depressed by the dearth of whiskey drinks (I saw only Jameson on the shelf with regards to available Irish whiskies), I figured I might as well go all the way so I ordered a drink 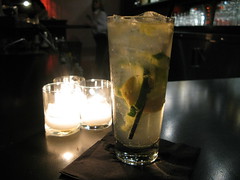 called Noir. It’s made of Absolut 100, ginger ale, lime juice, cucumbers and soda. This was the first time I’ve seen a specialty cocktail made with the 100-proof vodka. My friends and I figured the drink was called Noir because its strength would cause its imbiber to black out.

Oddly enough, I didn’t feel even a slight buzz after downing it. Its lightness made it very easy to drink, reminding me of spa water. But after I sucked down to the bottom of the glass, where I had expected to feel a lightheadness or for the room to spin, instead I felt stone cold sober. Boo. I think maybe using both ginger ale and soda diluted the vodka too much.

My next drink was going to be the black cherry smash (only because its name reminded me of my beloved Seven Grand smash) but apparently they were all out of the black cherry vodka. So I had to go with the spiced cider martini. It sounded promising at first, recalling autumn days playing in piles of leaves, but in the end it proved too sweet for me. All it did was make me wonder what hot spiced cider with whiskey would taste like. However, my drinking companions loved the cocktail. 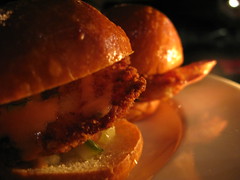 For a snack, I ordered up the crispy shrimp sliders ($12). Five little brioche buns perfectly sandwiched the shrimp with only the tails sticking out. I finished each sandwich in four bites, up to the tail. So yummy and crispy. The shrimp itself was perfect, not chewy or anything. These sliders were a nice little snack to share with friends but it would have made me full if I had it to myself.

As it was, we had room for dessert so we ordered a couple: the mascarpone grilled cheese sandwich with Nutella and raspberry ketchup ($6) and the coffee and doughnuts ($6), which was fried sugared “doughnuts” served with coffee ice cream.

Both so delicious. At first I had underestimated the dessert grilled cheese sandwich. It showed up at our table looking very plain. “Looks like something my mom made,” I scoffed. The thin grilled sandwich was cut in half, each triangle laid one over the other on the white plate with a side of raspberry ketchup. No fancy plating artistry or garnish. But then when I took a bite I immediately apologized to the dessert, “I’m sorry I doubted you!” It was sooo yummy. Why didn’t someone think of this before? It’s so simple. I could probably make it at home. 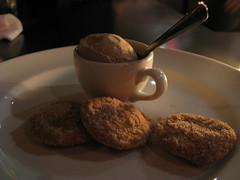 The coffee and doughnuts was pretty good, too — fresh fried doughnuts covered with cinnamon sugar accompanied with a mini coffee cup filled with coffee ice cream. It was yum but I liked the grilled cheese sandwich better.

Afterward, Tammi gave us a tour of the hotel but first I had to promise that I would refrain from taking any pictures of the hotel rooms and pool bar. The hotel wants to control the image it puts out to the public. Whatevs! Just as well since Hopscotch was closed for the night due to lack of customers on this frigid evening.

What I did see was that the pool bar has four cabanas, a dj booth, “stadium seating” for laying out during the day or lounging in the evening, a foosball table and Frogger arcade game. The second-floor bar area overlooked the pool as well as the parking garage in the back. I’d definitely like to check it out as soon as the weather warms up. There’s currently a pool party every Sunday from 1 to 9pm with “high-profile djs” but right now it’s too brrrr! for me to even consider it.

Another event at the hotel is called “Hours,” and it goes off every Friday from 7 to 11pm. There’s a dj and the crowd is made up of “cool corporate” types, OTIS design school students and locals whom the hotel has invited but it’s open to the public, too. There’s no cover for it at the moment but it is suggested that you rsvp to events @ customhotel.com.

Tammi took us around, showing us the king and queen bedrooms as well as the one-bedroom suite (all of which range in price from $189 to $299). Each room offered a beautiful view of the city and even LAX. Fortunately the windows are soundproofed, since the hotel is located so close to the airport.

She also took us on a tour of the unique meeting rooms (some equipped with sketch boards and ping pong paddles) but my favorite room ever had to be the one called Bazaar, a room filled with vending machines offering the oddest items ever to be purchased via a coin slot. There was the $5 ant candy made of real farm ants, the $3 yogurt scotch, $6 Larvets (worm snacks) and even an $11 tinsel boa. I asked Tammi who selected the products but she referred me to the PR department. Blah! And unfortunately for the curious public, the vending machine room is only accessible to guests of the hotel.

The Custom Hotel is definitely an odd one, in location and decor. But if you are looking for drinks at a swank hotel away from the Hollywood scene and without your having to suffer snobby hotel employees or too-cool-for-school beautiful people, may I suggest a seat by the fireplace in this Westchester hotel’s lobby?

BTW, you can probably forego the valet ($6 for two hours with validation) and just park down the street on the other side of the bowling alley. Free street parking!

POST EDIT: I went to Bistrotek last night and ended up chatting with Michael, the restaurant manager, who had already read my post about the place. He assures me that they will be expanding their cocktail menu to include a peach martini, a “chocolate chip” martini and a margarita. When I told him that all sounded too sweet and he needed one serious drink on the list, he offered to add a Manhattan. That’s the spirit! They will also be adding a bunch of fancy beers to their lineup. Yummy-sounding ones like Belgian trippel ales and chocolate stouts. Michael said I should check back next week for all the new goods.

More pics of the hotel.