The Garter: Another Dive Goes Legit 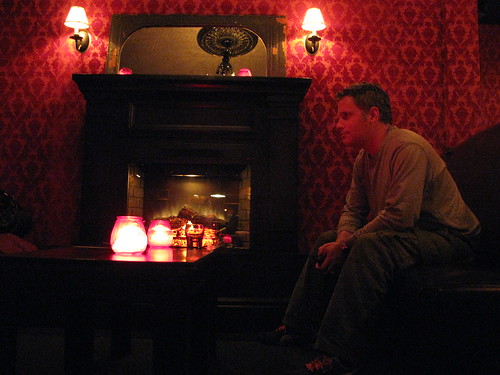 In dire need of a drink after work the other day, I convinced Crazy Andy to accompany me to the new and improved The Garter on Lincoln. I had gone there years ago when it was still the not-so-fancy sports bar called the Red Garter, and had left unimpressed. But after reading up on the reconverted dive bar, complete with new owner, I had to check it out. “Black chandeliers and purple velvet”? “Wii on a large flat-screen TV”? I’m there.

Serving as the halfway point for my and Andy’s impromptu tour of reconverted dive bars on the Westside (we had started off at the Arsenal and ended the night at the Alibi Room), the little bar near the corner of Lincoln and Washington proved easy to miss during our first drive-by. The key was to look for the address of the place, not a “Garter” sign. Plus it looks like they built over what used to be the small parking lot in front of the place. 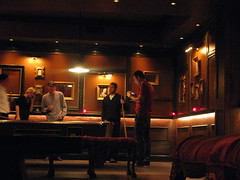 On this rainy Wednesday night, the bar was emp-ty. And I couldn’t help but notice that I was only one of two girls in the joint. The other girl was hanging out with a group of guys who were playing pool.

Andy and I sauntered up to the bar and plopped down on the bar stools, thankful to get out of the cold. The bartender immediately came over to us. I like that, prompt service. I asked my usual opening line at new-to-me bars, “Do you have a cocktail menu?” “No,” he laughed. Changing gears, I then inquired as to what kinds of Irish whiskey they carried. “Jameson” was the reply. But then when Andy asked for what kind of bourbon they had, the bartender rattled off a list of them. H’well!

I just ordered a Jameson neat ($7) and Andy wanted to keep up so he ordered his Basil Hayden’s ($9) the same way. Later he told me that I really should have asked for at least one ice cube in my drink since it would actually improve its flavor. Instead I ordered some ginger ale.

No sooner had I found a purse hook along the underside of the bar top when I discovered a faux fireplace in the corner of the room. Sweet! Nothing like a faux fire to make you feel all cozy. We immediately moved across the room to the leather couches in front of the glass-covered fauxplace. But since it was situated close to the open front door it wasn’t as cozy as I would have liked. Hm, I wonder if they could move it to the opposite wall. 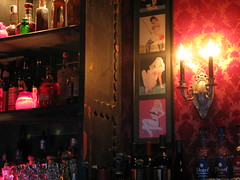 Settling back into our seats we took in the mellow scene. I liked it but Andy said he’d probably never come back. “Why not?” I asked but he wouldn’t really specify, just shrugged his shoulders and pursed his lips. He was just turned off.

I decided to chalk it up to the fact that there were 10 guys to 2 girls here. I guess with a name like The Garter that’s to be expected. However, there weren’t any ladies sporting garters here anyway, ‘cept on the wall behind the bar.

Since it was early and some band was setting up, the bar relied on its brand-new satellite jukebox for atmosphere. I immediately had to check it out. But when I inserted my second crinkled dollar so that I could get five credits, the machine made a weird noise and then didn’t count my dollar even though it apparently sucked it in.

I waved the bartender down and told him the situation. He then tried to make up for it by trying to insert a fiver into the machine but my dollar was jammed in there. “I broke your jukebox?” I cried aghast. “We just got this a week ago!” he exclaimed, half-kidding. He turned it off to try and reboot it but that left the bar silent so the patrons started to yell, “Turn the music back on!” I then shrunk down to two inches. “Sorry! Sorry!” I told the room and the glaring sound guy looking down at me from the dj booth. 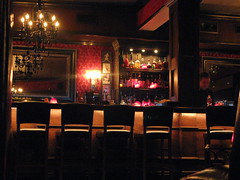 While the bartender stood there waiting for the juke to restart, I asked him if the bar picks the albums on the jukebox. “We didn’t pick the albums even though we could, I guess. But we did specify what kind of music we don’t want,” he replied.

Intrigued, I asked, “And what kind is that?” He smiled and said, “Hard-core rap and hip hop.” “So do you have hard rock on there?” I wondered, trying to gauge if he was going for a mellow jazzy vibe here since he had just put on Ella and Etta moments before I broke the jukebox. “Yeah, we have hard rock.” Uh huhhh, interesting.

After the jukebox finally restarted and went back to accepting paper money, the bartender gave me back my two dollars and I returned to Andy who was playing with his phone out of sheer boredom. I saw that he had finished his second bourbon. “You want to go?” “Yeah, let’s get out of here.”

The bartender waved and thanked us as we made our way out the door. I looked back at the still empty bar, save for the still setting-up band, and contemplated whether I’d ever return for its happy hour (6-8pm), reversed happy hour (12-1am) or the Wii tournaments on Monday nights. I think I would.

If I’m ever in the vicinity of Venice, I’d be interested to see if this place is jumpin’ later in the night. Or I’d come back if I just want a laidback place to chill after work. But I suspect I’d have to find someone to drag with me other than Crazy Andy, a posse of girls perhaps.