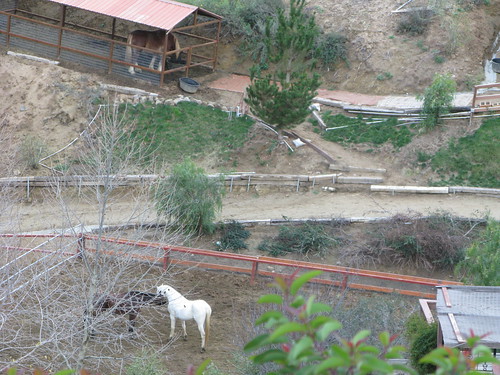 I’ve always wanted to go on a full moon ride ever since first I heard about it. So last night that’s just what I got to do with Los Angeles Horseback Riding up in Topanga Canyon.

“Wasn’t it rainy yesterday?” you ask. Why, yes, yes it was. So we didn’t really get to see the moon on this “full moon ride,” just caught a tiny sliver of it peeking through the clouds at us like a doorman looking through a slot in the door of an exclusive nightclub. The thing is, that L.A. Horseback Riding has a really strict policy about cancellations and they would only cancel the ride if the trail got “too soupy.”

So there we were at sundown, drizzle coming down, air getting chillier by the second, but we had to go through with it. At least our horse wrangler, Chris, put us on some really docile horses, who are used to carrying squirmy 7-year-olds, since it was our first time ever sitting on one.

My horse was named Dancer, a 7-year-old quarter horse/Arabian. “She’s going to want to snack on the trail but that’s just to test you to see if you are in control. So when she drops her head down just tug the reins back and kick her with your heels.” Eesh! I winced at the thought of kicking a horse. “Don’t worry, it doesn’t hurt her. Just gets her attention,” the wrangler said.

We received some brief instruction on how to steer a horse: reins forward to go, reins pulled back to stop, reins on the left side to turn left and on the right to go right, and always ride with heels down in the stirrups. But since we were on horses for beginners, they already seemed to know what they were doing, just following Chris on his huge Draft horse, Lancelot.

On this cold, drizzly January night, we had a small party of three — just the bf, me and Chris. The maximum for group rides is six people to keep things orderly. And although this was some nice quality time with the bf I think it would have been even more fun with more people involved. As it was, we just chatted with Chris, asking him a billion stupid questions like if horses can see in the dark and if they ever slip and fall when it’s slick out like this. (OK, those were my questions.) He answered them patiently and with a sense of humor and a touch of sarcasm. Dude likes to talk, being an actor/comedian and all, so I didn’t feel too bad.

Our ride started at 5pm and would last for an hour and a half. The trail he took us on was 25 miles in length but we obviously didn’t cover the whole thing. Our speed was slowww. Only a couple of times did Chris let us take the horses up to a trot. (Apparently there are four speeds to a horse’s gait: walking, trotting, cantering and galloping.) So Chris told us to grab more of the reins so that it formed “a huge ice cream cone” and then hold the reins forward while giving the horse a little kick to move faster.

I did that but problem was since my knees are hurting from the marathon training I couldn’t really sit the way I was supposed to and stand up in my stirrups. So my feet were flopping up and down on either side of Dancer as she took off. She interpreted my flopping feet to mean “Go faster!” and actually went faster than a trot. My bf and Chris laughed while I squealed, “Ow! owww! stoppppp!” and tugged on the reins. Finally Dancer stopped since Chris’ horse stopped.

At first the bf was impressed, thinking I had wanted to go faster on purpose. Nope! Actually it would have been really cool to go fast if my knees weren’t hurting so bad since I was kinda getting sleepy with just the walking speed. That clip-clop of the horses’ hooves is hypnotic.

The scenery was beautiful, though. We rode on a trail overlooking the Valley and could see the sparkling city lights. There were some patches of sky and even that moon. Fortunately it only drizzled so we didn’t get drenched. Still, I wished I had worn long johns, longer socks, a rain poncho and even a water-resistant hat.

Eventually we made it back to the ranch. Chris let us feed our horses mulberry leaves and said that the next time we come up we could bring them carrots and apples since they lovvve that stuff. But, FYI, honey and oats granola bars are their ultimate favorites.

As for coming back, I wish I could but it’s so darn expensive. For two people for the full moon ride, it’s $265 and that doesn’t include tip. I know Sunset Ranch Hollywood charges $60 a person for their sunset rides on Fridays. And Malibu Riders charges $50 a person. But Los Angeles Horseback Riding is the only one to offer the full moon ride. (They also offer sundown rides that start earlier and are more frequent.) And, no, we didn’t get a discount for our lack of moonlight on our ride. Oh well. Still, it was a fun first time experience and I’d love to go riding again if I wasn’t so darn allergic to horses (turns out).

BTW, I wasn’t able to take pictures on the ride since they don’t allow cameras on the ranch and on the trail. Hence the lame, faraway picture above. Boo, I know.

But for those interested, the ranch will have a special Valentine’s Day ride complete with a barbecue if you want to do something more than just dinner and drinks on your V-Day date. And, yes, I’ve already forwarded the info to Crazy Andy as an idea for his grand prize date.

Speaking of which, single ladies, send me your submissions to win a date with the man! He’s available and the dates will be fun.