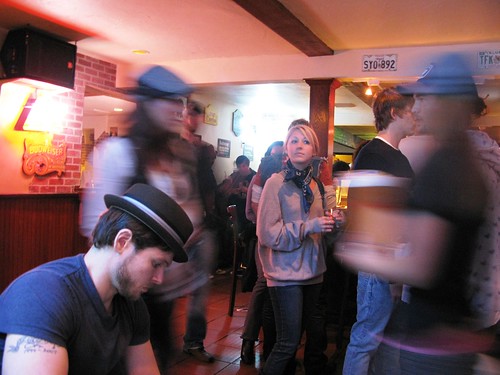 The other night, my friend Ramona was celebrating her last night as a Chambord ambassador with a little gettogether at her favorite bar, the Happy Ending Bar and Restaurant. Apparently she likes to come here to watch football on Sundays. Yes, it’s a sports bar. But unlike a lot of sports bars that you know, here, they fancy themselves, well, fancy with their gourmet bar food — i.e. gruyere cheese instead of American cheese in their grilled cheese sandwiches and truffle-herb French fries. H’well!

My plus twos for the party, Shelley and Remy, and I grabbed a table since I was famished and wanted to order food. The extensive double-sided menu listed Happy ‘Tizers (appetizers), Happy Medium (uh, small entree?) and Happy To Be Large (entrees?) as well as hot or cold New York “sang’wiches” and NY-style pizzas. The entrees ranged in price from a $10 hot dog to a $27 South Street Seaport pie which was a seafood pizza topped with shrimp, clams and lobster. 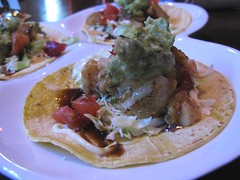 So many intriguing choices but I settled on the miso-glazed fish tacos with wasabi cream and a tomato-avocado salsa ($11) although that grilled cheese sandwich with tomato soup sounded comforting.

Then my eyes naturally scanned the rest of the menu for dessert. There they were under the “Happy Happy Endings” heading — a root beer float (poured tableside), freshly made cookies, a chocolate cake, and s’mores, to name a few. Hm, cute.

But I was more interested in the trio of Lushious Liquid Endings or Beginnings ($9). This collection of dessert shots included oatmeal cookie, chocolate cake and pb&j. I had to get it if only for its cleverness. Liquid dessert!

I was hoping to split these with Remy and Shelley since I couldn’t drink anymore of the complimentary Chambord cocktails but the kids were too grossed out by the drinks’ uber sweetness after tentatively sniffing each glass and then taking a tiny sip. Shelley and I did a small taste test. I was already familiar with the oatmeal cookie shot, thanks to past girls’ nights out, so was looking forward to the other two. 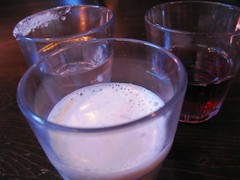 Although the pb&j was reminiscent of a peanut butter and jelly sandwich what with its raspberry liqueur (not Chambord) and Frangelico mix, the chocolate cake tasted nothing like its moniker. It arrived with a rim partly dusted in sugar and the liquid was clear. I guess I expected it to be creamy at least and chocolate-y-looking. It was sweet though. Well, that was fun.

My fish tacos, on the other hand, were tasty. The miso glaze gave it an Asian flavor that suited it and lent something different to the usual taco-eating experience. Three had arrived on an unusual triangle dish and at first I offered to share them with my friends but after I bit into the first taco, I immediately rescinded the offer. Mine!

Although I did enjoy my meal, I didn’t enjoy the table conversation at all. Mainly because there couldn’t be any since the music blaring on the speakers was too damn loud, followed up by a live ’80s band. So we sat there in silence, occasionally leaning over to yell in each other’s ears.

This is the kind of bar where the early-20s set comes to do Jaeger shots and grind on one another to Akon.

Wouldn’t come here for dinner or for a date but maybe with a large group of boisterous friends for some drinking and singing. (There’s Corey-oke night on Mondays after 9pm where you sing karaoke backed by a live band made up of the three ’80s Coreys — Feldman, Haim and Hart.)

The drink menu{#p1430} facilitates drunken nights out what with its $22 fish bowls (2 people minimum) for those with no discerning taste. The fish bowl called The Dinky offers 64 ounces of vodka, beer and lemonade. Ugh. And the other specialty cocktails, although with humorous names, just didn’t appeal to me at all. I’m not going to say they aren’t good since I haven’t tried them. They just don’t sound good. I think I’d stick to usual sports bar fare like the $7 margarita or the Guinness, Bass Ale or Stella on tap.

Bottom line, I’m too old for this place.