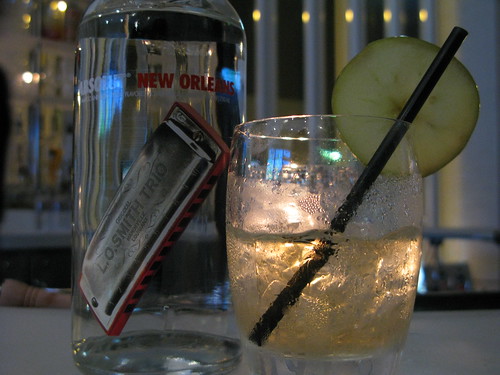 My friend Steve at Kumo was bored. It seemed that people go to Michael Ovitz’s shiny Clockwork Orange-decorated restaurant more for the high-price, small-portions food than the cocktails. A shame considering they have a nice bar area, a very talented bartender and some interesting cocktails.

Last night Dre and I kept Steve company. As the only two patrons at his bar we got his complete and undivided attention. Very cool because then he could do what he does best: custom-make cocktails for our tastes. While Dre was willing to try his grapefruit-heavy concoctions, I wanted to try what was in the different-looking Absolut bottle sitting on the shelf behind Steve.

Turned out it was the Absolut New Orleans special edition vodka complete with the image of a harmonica on it. The spicy mango-with-black-pepper-flavored vodka was created to commemorate the second anniversary of Hurricane Katrina, with 100% of the proceeds from its sales going to New Orleans charities.

Steve gave me a taste of it and it was deelish. I could almost just drink it straight up. Fruity but not too sweet. Steve said that they currently didn’t have any cocktails on the menu that used this liquor but that he could do up something nice for me.

But he’d have to go to the back first to get the one ingredient he needed. When I asked him what it was, he very cryptically said, “If I told you, you wouldn’t want to drink it.” Hm, that didn’t sound good. The bathroom was in that direction, I pointed out.

While he was gone, I thought about all the different cocktails you could make with this vodka. You don’t want to mix juice with it since it’s already so sweet. But what can you do with it then? Later on I found out that Absolut has several cocktails you can make with it: Bourbon Street Jump, New Orleans Collins, Creolinha and Pink Orleanade.

Steve, however, had something else in mind. He emerged from the back with a shot glass filled with some brown liquid. Hm. After some goading he finally told me what it was: apple vinegar. “Interesting!” I squealed. That Steve. So creative.

He poured a couple of shots of the vodka over ice and then added three-fourths of the apple vinegar and then topped it off with a bit of soda.

I took a tentative sip and was instantly delighted. By golly, this strange brew actually worked. I liked how it wasn’t overly sweet and even its sourness worked. The soda, according to Steve, also softened the harshness of the vinegar. Definitely like nothing I’ve ever tasted before.

Dre demanded Steve make her one, too. “Do you have a name for it?” I asked him. When he said he didn’t, I suggested “Katrina” but he and Dre thought that was too mean. I, on the other hand, thought it a nice tribute to N’Awlins. But, there’s already a Hurricane Katrina cocktail out there.

So, even though Katrina ($11) isn’t on Kumo’s menu, give Steve a visit and he’d be happy to do one up for you. Plus, I’m sure he can use the company.