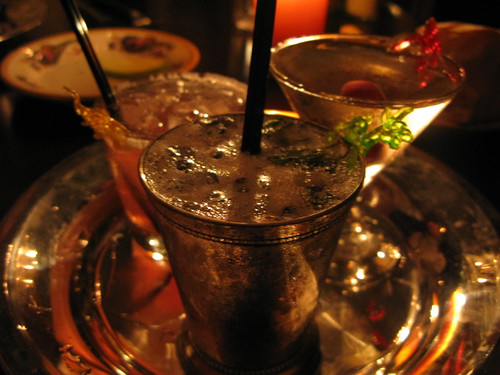 Last night after watching Sweeney Todd at the Arclight and consequently swearing off meat for at least a month, Shelley and I decided to finally check out Luna Park’s Mini Bar cocktail flight ($13.50). I was in dire need of a drink anyway after that bloody movie. Yes, definitely no shepherd’s pies for a lonnnng while.

Anyhoo, on a Sunday night, the restaurant was surprisingly buzzing. (I don’t know why I assume people eat at home on Sunday nights.) We were able to grab a booth and immediately ordered a round of Mini Bars before we even thought about our dinner choices.

The trio of cute cocktails showed up on a silver platter looking very much like a starter kit for a newbie drinker. There was the traditional silver cup for the mini mint julep, an old-fashioned glass for the bitty raspberry margarita and a martini glass for the tini Ice Breaker. All were garnished with the cute plastic cocktail animals that the restaurant likes to use in all its drinks.

Luna Park calls this a flight but doesn’t suggest an order in which to drink them, like wine flights are done. So I just decided to go with the simplest of the bunch which seemed to be the Ice Breaker (Roth Vodka and Bonny Doon Vin de Glacier ice wine) with its lone purple grape resting at the bottom of the glass.

If I had to pick a favorite of the three, this was it. And it was too bad that I went for it first as I usually like to finish off with my fave. Its simplicity was appreciated when compared to the other drinks. And it was very light, almost like flavored water.

The mint julep was too sugary (even for me) and in contrast I found the raspberry margarita pretty salty, made worse with the requisite salt on the rim. I couldn’t really taste the alcohol in any of them, but just when I started to wonder if these were just kiddie versions of serious drinks I started to feel a little buzz coming on. Yes, me of little faith. I forgot that girl drinks are like that.

Even though I wasn’t crazy about the cocktails themselves I still toyed with the idea of ordering another round simply because I loved the fun of having three drinks presented to me on a silver platter. Luna Park is great like that. So many fun things on its menu, i.e. the Floating Island Punch for four and You’re a Pepper cocktail, that you want to order just for the experience.

However, the next time I find myself at Luna Park I don’t know if I’ll be up to ordering the Mini Bar again simply because if I’m going to drink a cocktail I require that it be serious (read: not frou-frou, I grew up a bit) and many of the cocktails at Luna Park are a little too, um, girly for me. I’d probably go for a nice glass of red wine instead.

But if you find yourself celebrating a 21st birthday, a Mini Bar would be a fun way to get started on the road to drinking. Or if it’s an ultra girly girls’ night out, keep it festive with these toy cocktails.