Mode: You Got Your Vogue in My After-Hours! 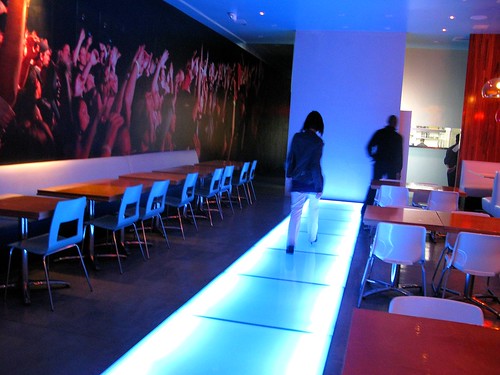 It was after midnight and the tingly mingly at Seven Grand was mellowing out. I wanted to go home but Shelley, Crazy Andy and his roommate Greg wanted tacos from the taco truck on Alvarado. “Aren’t you hungry?” Shelley asked me. “No. I usually just go to sleep and that takes care of it,” I responded. But then someone suggested we check out the newish 24-hour bistro down the street on Olive, Mode.

Well, of course I had to check that out. I read about it just about everywhere — about it as Fashion District venue and then about its opening days’ struggles. So I dragged my tired ass on down the street. ‘Cept I thought it best we drive the couple of blocks since the neighborhood was getting sketchier by the minute.

Late night on a Wednesday, the bistro was dead save for the bevy of amped-up hosts and servers and a party of five at a corner booth. Empty like this, the place looked like a school cafeteria on winter break. 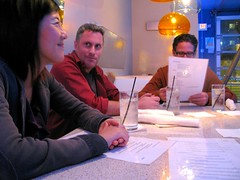 Uncomfortable-looking chairs and poles running from the ceilings to the floor, I guess it was going for industrial and urban. I loved the huge photo mural spanning the wall, though. It was of a crowd of people at the L.A. Tofu Festival. “Hey, all your crackheads are here!” Crazy Andy kidded. I grunted. I was exhausted after the party.

Unfortunately for me, but fortunately for people who like peppy people late at night, it seemed like all the hosts, hostesses, and servers had lots of energy to spare. They were giggling and sashaying up and down the blue-lit catwalk that ran down the center of the room and then danced around to the music playing on the sound system. Ugh. Stop it! I just want to eat….and then go home.

They were so friendly, too friendly for so late at night. It made me wish for a terse waitress named Flo at a greasy Norm’s. Crazy Andy and Shelley were in a better mood than me though so didn’t mind. After we placed our orders, Andy’s roommate decided to run down the street to Ralphs since Mode doesn’t have a liquor license and, despite what people have said, didn’t have a beer or wine menu to offer us. But they will uncork your wine for you, at no charge no less!

Problem is, dude had to run past the strip club riffraff next door and all the riffraff along the way to get to this Ralphs. When his French Onion soup showed up and he didn’t yet, Andy was tempted to call him on his cell. “He’s probably getting raped right now,” he half joked. But fortunately, the roomie did make it back, still intact. 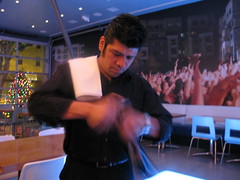 Immediately a server came out with four wine glasses and a bottle opener. Service was pretty efficient here. “Of course,” you’re probably saying, “it’s easy to be on it when there’s no one else in the joint.” But you’d be wrong. There are plenty of empty places that take the a.m. hours to mean they don’t have to work as hard. Fortunately, that wasn’t the case here.

The food did seem to take awhile though but I blame that on Andy’s order of steak frites ($24). Kinda hungry but not wanting anything too heavy, I ordered the Croque Madame ($11) which came with pomme frites. OK, that’s still pretty heavy but it was the only thing I was feeling on the menu. The entrees were too complicated and pricey for me in this a.m. (This was the dinner menu. The late night/breakfast menu{#p1399} starts at 3am.) What with the $21 rosy chicken breast and $19 seared albacore steak. Hors d’oeuvres ranged in price from $7 to $14 and the “faise la conversation” ranged from $8 Pernod steamed mussels to the $12 cheeseburger.

So Croque Madame it was. It was kinda breakfasty with its forest ham and ementhal cheese in a brioche topped with a fried egg and Mornay sauce. It was all right. Unfortunately it seemed to get cold right away. Not great when there’s egg yolk and bernaise sauce involved. I looked at the ceiling to see if it was because there was an A/C vent blowing on it. Hmm, wish I had access to the microwave. 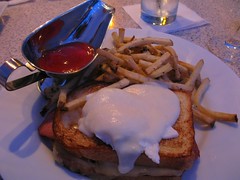 Everyone enjoyed their late-night meals and wine while I inhaled my cold croque and then slumped in the chair. Shelley continued to pick at what was left of my perfectly salted fries. I was too tired to swat her hand away.

Suddenly everyone looked at me and felt bad. I guess I looked miserably tired. Normally, I’d pretend-perk up so they wouldn’t but I didn’t even have enough energy for that.

So yeah, I don’t know if I’m feeling Mode. I like it cuz it’s just a couple blocks down the street from Seven Grand so it’s perfect for an after whiskey night out. But I’m not crazy about its prices, lack of a liquor license or its heavy French-reminiscent cuisine, especially so late at night.

And downtown’s sketchiness after hours isn’t all that, uh, charming. Case in point, as we were leaving the restaurant the hosts warned us “ladies” to watch out for the fight that was taking place in front of the strip club next door. Two guys were whipping each other with their belts while a bunch of strip club customers looked on. Sounds funny but it was actually kinda scary cuz you never know if things like that will get uglier.

Maybe I should have just went for the taco truck on Alvarado after all. Or even the Original Pantry, Fred 62, Swingers or Dennys. I guess I’m more of an “after-hours at a greasy spoon” than “on the pages of Vogue” type of gal.