Taste: Great for a Fake Anniversary 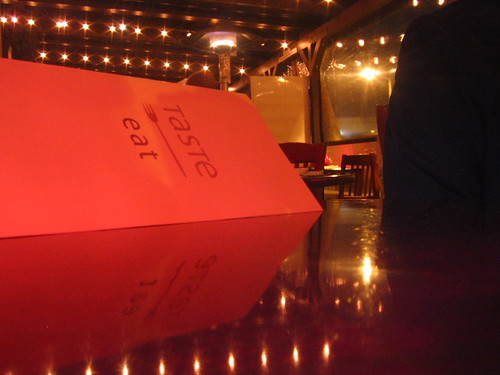 I already wrote about Taste on Melrose last year, but last night’s experience called for another writeup. I picked Taste as the restaurant where I wanted to celebrate my and my bf’s one-year anniversary since I lovvved the food and I didn’t want anything too scene-y. It’s a low-key neighborhood restaurant even though it’s located across the street from the tres scene-y Comme Ca. Dress code is casual and the vibe was mellow. Perfect for a quiet evening out.

So I made reservations online a la

Opentable and in the special requests box I mentioned that I would like a nice romantic table since we were celebrating an anniversary.

When we showed up at the appointed time, the hostess was very accommodating considering the place was kinda buzzing. Initially she sat us on the front patio but then I wanted to move because the cold wind was blustering through the plastic curtain walls. So she moved us inside to a corner table that sat four so that we could sit on the same side. And I guess she was trying to get the bf to sit with me but at first he wouldn’t for some reason until I patted the cushion next to me.

Then the hostess started removing the extra cutlery and said something about not being married yet but some day…. I thought that was a weird thing to say but shrugged it off. It wasn’t until later when even our waiter alluded to our celebrating an anniversary that I realized: They think we’re celebrating a wedding anniversary. Oops! My bad. It didn’t occur to me that people would think that when I mentioned anniversary in the reservation.

So my bf and I giggled to ourselves and went on to enjoy our yummy dinner. For starters we had the calamari fritti with chipotle lime aioli ($9) which was the best calamari I’ve EVER tasted. The meat wasn’t chewy and it wasn’t overly breaded. It was perfectly spiced up and mmmm, that aioli? I wanted to just spoon that into my mouth. I couldn’t stop eating it and even the waiter said, “Good job” when he came by to check on us. What? Do people usually not finish that?

For my entree, I ordered the cumin spiced pork chop with mojo sauce, white truffle oil and mushroom and mac n’ cheese with sauteed rapini ($18.75). Unfortunately at this point, after the calamari I was too full to finish it. But it was so tasty that it made me wish that I could stretch my stomach at will so that I could continue to eat without feeling full. I bagged the rest to go instead.

The waiter then showed up with the dessert menu and even though they had a tempting selection of a chocolate parfait devil’s food cake, a pear tartine, creme brulee and even a dessert sampler, my bf said he couldn’t eat another bite. Boo. So I had to tell the waiter we were done. But then he came back with two forks and said, “We have a special something for you for your anniversary. Don’t go anywhere.” Eek. My bf and I looked at each other.

Then they took away the table that was next to us. “Uh oh, are they going to have a band play us music?” the bf asked with fear in his eyes. “Uhhh, I hope not.” Then I saw the waiter emerging from the kitchen with a slice of chocolate cake. On it was a single birthday candle. Eeesh, this has gone too far. I started to get nervous and flashbacked to when I was a kid and my mom made either me or my brother or sister pretend it was our birthday at Chuck E. Cheese so that we could get the free pizza and have the puppets sing “Happy Birthday” to us.

Fortunately, here, the cake and candle was the extent of it. So nice of them! But at the same time I felt bad. Not too bad though as I was able to enjoy the flourless chocolate cake with chantilly cream and raspberry sauce. So yummy! “Mmm, it’s rich but not overly sweet,” the bf marveled. I tried to finish it up but my tummy wasn’t having it.

Anyway, this night just confirmed why Taste is one of my favorite restaurants. Love the comfort food, the wait staff is so accommodating and professional and the scene…there isn’t one really but that’s what makes it great.

I definitely have to go back to check out the brunch and, who knows, maybe to celebrate a second anniversary. My bf and I thanked the waiter and hostess on our way out, all the while keeping our left hands plunged deeply in our pockets.