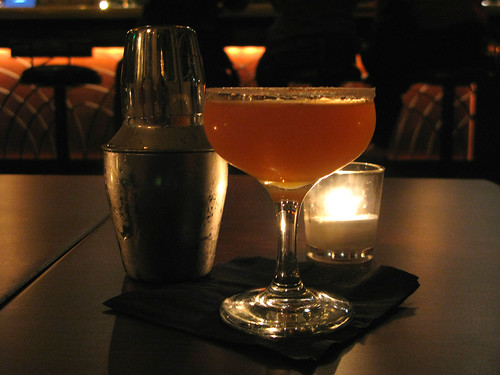 Last night, my friend Shelley and I checked out Chloe, a new bar/lounge in Santa Monica that took over Voda‘s old space off the 3rd Street Promenade. Shelley read about it on Daily Candy and I heard about it on UrbanDaddy. Both writeups told of a charming Parisian lounge where one can enjoy vintage cocktails like Pimms Cups and Negronis. Swank!

Past an unmarked red door next to the Hotel Carmel, you’ll step into an opulent French boudoir with antique-y mirrors, tufted banquettes…and the occasional tiger stripe.

Fortunately for us, we got to be there on its opening night. Unfortunately for us the folks at Chloe are still shy about people taking pictures of the place. Apparently key parts of decor are still missing and they don’t want it shown in this state of undress. But they did let me to take pics of my cocktails and food.

This new lounge is so un-Voda. Rather than the cool darkness of a vodka bar it has the warmth of a candlelit salon. That low wall that had separated the bar area from the seated area in Voda is gone so now it’s an open space where those at the bar can now check out those kicking back on the plush sofas and chaise lounges along the wall.

And although Chloe is marketed as a French lounge there wasn’t anything particularly French about its decor or menu, at least that’s what our companion for the evening, a Frenchman named Remy, told us.

“Do you feel like you’re in Paris?” I asked him as we looked at the chandeliers hanging overhead, the antiqued mirrors on the walls, the sleek waitresses dressed in cute silver dresses with red sashes, and the wine, food and cocktail menus. Remy looked around at the crowd of 30-somethings enjoying their tiny cheeseburgers, mac and cheese and cocktails. “Uhhh, no,” he replied. “Why not?” I protested a bit.

The modern take on a 1930s Parisian lounge has plush burgundy banquettes, French chandeliers, and antique mirrors throughout.

To me it evoked that romantic warmth of a Parisian lounge but maybe that’s just my American perception of what’s French. But then looking at the menu of crostinis and sandwiches, I could see what he meant. “Maybe they call it French because they have champagne cocktails…” Shelley offered. “And there is fromage on the menu,” I added. Remy shrugged, unimpressed.

It was still a lovely place to sit, especially considering we were just steps away from the Promenade and places like Barney’s Beanery and Yankee Doodles. And the waitresses and hostess were very smiley and friendly, not “French” by any means.

Immediately we perused the cocktail menu. I ordered up the Sidecar ($14) — Hennessey, Cointreau and lemon with a sugar rimmed glass. 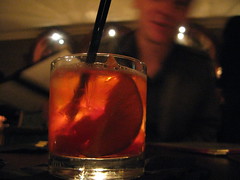 This was only because, although the cocktail menu seemed to be split into categories for the specialty house cocktails, champagne, vodka, and gin cocktails, they didn’t seem to have any listed for whiskey/bourbon drinks other than the Sidecar and Old-Fashioned. Hmf! It wasn’t until I had ordered my second drink, an Old-Fashioned, that I realized more cocktails were listed on the back of the menu; cocktails made of whiskey, of rum and of tequila. Bah!

Shelley ordered the Old-Fashioned ($10) — Knob Creek Bourbon, Peychaud’s bitters, orange slice, maraschino cherry and a sugar cube. She made the mistake of taking a big gulp of it, thinking that its redness was due to juice or something. Nope, that’s all bourbon. I laughed as she made a grimace while taking that initial gulp. But then I made the same exact face even after I was warned how strong it was. And by gosh, it sure was potent stuff.

My Sidecar was no slouch either. Initially it was kickass and thank goodness for the sugar on the rim which helped take the edge off. But later it didn’t seem so bad-it’s-good the more I drank. “Maybe it’s because your taste buds are numb now,” Shelley joked. “Nah, I think it’s cuz the rest of it is ice water,” I replied.

My Sidecar came with a little cocktail shaker for the “excess” but when I went to pour the rest into my cocktail glass, all I got was ice water. Heyyy, that’s false advertising! The cocktail is served in a smaller-than-normal cocktail glass (vintage size, I like to call it) and with the accompanying mini shaker you think you’re getting more than your money’s worth but nope. Plus it was so yummy that it went down easily no matter how hard I tried to prolong its stay on our table.

Thus I had no choice but to order that Old-Fashioned. I was so mad (OK maybe just peeved) when I found out about the other whiskey drinks, which sounded intriguing. One was called the Presbyterian ($8) — Jim Beam Rye, ginger ale, club soda and lime. The other was the yummy-sounding Whiskey Cobbler — Knob Creek Bourbon, Grand Marnier and fresh lemon. Ah well, maybe next time.

I had considered ordering that cobbler, but after my second drink there was no mistaking that I, indeed, had had enough.

Remy had nursed a Pimms Cup which none of us were really sure about. What’s a Pimms? Anyway, he seemed to like it and especially enjoyed how light it was compared to Shelley’s and my chesthair-growing cocktails. When I saw the Pimms had a slice of cucumber in it, I knew it was a sissy drink. 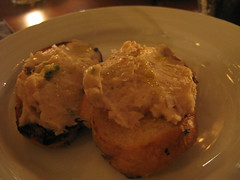 We also ordered a couple of things to nibble on, starting off with the anchovy and white bean crostini ($4). This was essentially two buttery toasted pieces of bread slathered with something resembling hummus. Twas OK, but $4 for those two little pieces of bread?

We also got the $9 calamari. Fortunately it wasn’t overly breaded or greasy or chewy. It was just right. Seemed to be missing something, though, to make it special but can’t put my finger on it. Maybe a better sauce or more seasoning on the calamari?

I also considered ordering the $9 Chloe petit burger but wasn’t that hungry. Actually that burger looked smaller than most $9 burgers usually look.

Shelley complained that everything here from cocktails to dessert seemed pricey, too pricey to be enjoyable. But considering that this was Santa Monica and just off the touristy Promenade the prices are unfortunately about right for the area. Sure, the cocktails range from $8 to $14 but that’s the norm now…. I know. What happened to me?

In any case, I’d like to come back on another night when the new lounge has got its bearings and more decorations on the wall so I can take pictures. It would have to be early in the evening, though, if I want to snag one of those chaise lounges since as it was things seemed to pick up a lot after 8. For its first night, this place had a nice crowd that just seemed to grow as la nuit wore on.