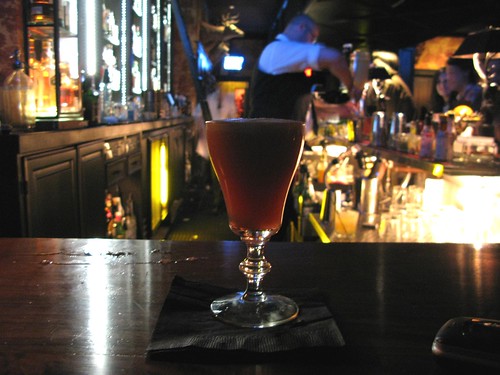 Seven Grand’s new winter cocktail menu will make its debut this Saturday! Yay! The bartenders are currently getting schooled on the toddies, flips and sours so they’ll be ready for the thirsty masses this weekend. And don’t worry your pretty little head, the summer favorite Kentucky Mint Julep is still there (although the other juleps went the way of the summer wind). L.A. is a seasonless city after all so a julep still works.

BTW, I asked Aidan, the general manager, why there isn’t a “special” Seven Grand Irish coffee and he said Patrick, the bar manager who’s a wee bit Irish, won’t let anyone mess with it since it’s an authentic recipe as it is. Fair enough. It is pretty good though. And I guess there was some talk about adding a chocolate-something cocktail to the menu but fortunately that got vetoed.

Some of the new cocktails include:

But if you want to try some really yummy off-the-menu cocktails, just go up to Damian (I know fer sure he’s there on Broads on a Bender Wednesdays) and ask for one (or all) of the following: a Smash (still one of my faves, a dee-lish vintage cocktail), Black Agave (Dre’s second fave with some agave syrup in it), the Maple Cherry Sour (I usually don’t like sours but loved this one) or just tell him to do something up for you but be specific whether you like sweet, aromatic, fruity, etc. and he will surprise and thrill you. I still love watching that guy work and seeing him think of how to make a cocktail taste better.