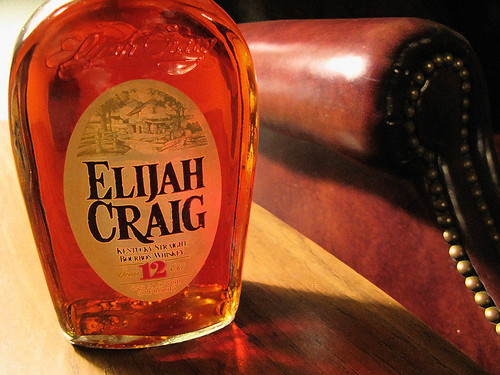 I decided to go for an evening walk when I got a hankering for some whiskey. What better way to warm up on a chilly November night? All out of Jameson, I stopped by Wally’s Wine & Spirits on Westwood Boulevard for a fresh bottle. Thing is, they have a whole aisle filled with different brands of scotch, whiskey and bourbon. I stared at the $22.99 bottle of Jameson but considered getting something indulgent instead.

Unfortunately, even though I love drinking whiskey and

Seven Grand, I ain’t exactly a connoisseur of the stuff so I just stood there in the whiskey aisle looking lost. Each row of bottles had a helpful little tag in front of it with a description of the whiskey’s taste notes and back story on it but the two shelves of selections were still a bit overwhelming.

Fortunately, a tall bearded gentleman in a green Wally’s apron came by and asked me if I needed help. His name was Max and he had an accent which I think was Australian but I can’t be sure. Anyway, I told him that I usually go for Jameson but was thinking of trying something different and better, perhaps a 12-year-old something.

He asked me if I was into single barrel, bourbon, etc. and I confessed that I had no idea what the difference was and that I just liked my Irish whiskey and have had some experience with Maker’s Mark and Jack. He pooh-poohed the latter two. Actually he said Maker’s was overhyped and Jack was crap. I liked this guy immediately.

Surprisingly he pointed me to Elijah Craig’s 12-year-old bourbon. I say “surprisingly” because it was only $19.99. I thought for sure, as most salesmen do, that he’d upsell me on something since it would be easy to do with someone as ignorant as I apparently was. But he said that Elijah Craig’s was the best you could get for that money. “It’s 12 years old and it’s only 20 bucks!” he reiterated.

There was a strong rye taste, spicy and heated. But then, we also tasted fruit, citrus and berries. And what else, maybe some of that butterscotch we smelled, as well as the woodiness of the oak? Yessir, it’s all there. When we breathed in, we could feel the heat rushing into our lungs. Adding water or ice removed some of that heat, but we liked it best straight up.

Next to it was a $35.99 bottle of an eight-year-old small batch Black Maple Hill bourbon which he highly recommended as well. Again I tested him by asking which of the two I should get and he suggested the Elijah Craig again. “You can get two of those for the price of just one Black Maple.” “Sold!” I said. But he was still talking as he still had more of the whiskey aisle he wanted to show me. I love that!

On the shelves opposite the Jameson and Jack were some of the more higher-end stuff. “This is what you should save your nickels and dimes for or tell your boyfriend or whomever this is what you want for Christmas,” he said gesturing to the bottles, they ranged in price from $36 to $200. Online on Wally’s site they go as high as $11,000 for a Macallan 1937 37yr Futures. Damn!

“But when you start on these you can’t ever go back to that,” Max gestured with a sneer toward the Jameson. “What’s so great about these?” I asked. He went on to say that each bottle was so different from one another and what was good about each one was purely subjective. One whiskey he said would evoke the sensation of standing on a Scottish moor watching the peat fog roll in. I wanted that one but it was about $60.

“I’ll start with this,” I told him, raising the bargain bourbon in my hand. I thanked him, we shook hands and parted ways but it’s nice to know where I can go and who I can talk to should I ever feel like upgrading my whiskey.

BTW, I tried the Elijah Craig and at 94 proof it’s soo strong, warmed my throat right quick. But it’s definitely something that should be enjoyed straight up. And next time I’ll definitely have to enjoy it next to a roaring fireplace.