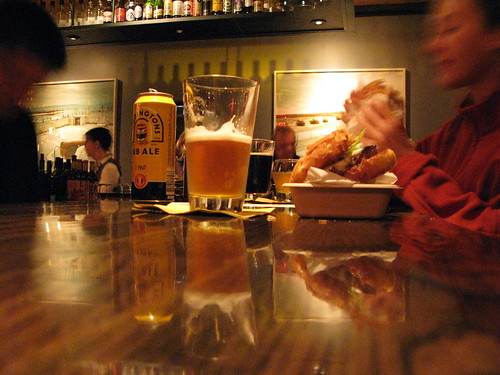 I was so excited to check out the Alibi Room, the dive bar turned gastropub in Culver City. It kinda sucked that it came to be after I moved out of the neighborhood because it would have been cool to have a bar within walking distance. But here it was now, baby Beechwood, created by the guys who brought you the Venice beach bars, the Brig and Beechwood.

I should have been clued in right there that maybe I wouldn’t like the Alibi so much as I’m not crazy about the B-bars. Walking in, it does look similar to Beechwood, decorated West Elm modern and woody. It’s small and dark with a triangular bar in the center and a tiny fireplace in the far wall. ‘Cept with the chairs crowded around the fireplace, there’s really only room for two there. I asked a girl sitting by herself in front of it if it was even warm and she said no. It looked awfully cozy tho.

Anyway, my bf and I were looking for somewhere to eat AND get a drink and I wanted a local place I’ve never been to before. Enter the Alibi Room. I read that they had some food and comparisons to a gastropub/cafeteria meant that we would surely find something to eat. However, scanning the menu, we were both disappointed.

Some stuff on the menu:

Nothing sounded appealing what with gravy and Cheese Whiz involved but I had to eat something. At first the idea of a “real deal ‘prime’ Philly cheesesteak” sandwich sounded yum until I saw that it offered your choice of either whiz or American cheese. Blech! So I went with the lesser of two evils despite the American cheese, the Alibi burger, and the bf ordered the tacos.

For drinks, we perused the beer list. There are only two beers on tap and the rest are canned or bottled. I’m not a beer connoisseur so I found a lot of beers I’ve never heard of before, like Echigo Organic Microbrew, Czechvar Draught and Castelain Blond. Fortunately the one bartender on hand was helpful and friendly considering there was a 15-customers-to-one-bartender ratio. I went with the Belgium Foret Saison Ale ($8), a wheaty and mellow brew. Twas OK but I wish I had gone with the oatmeal stout or Guinness instead as the chilly night called for something heartier. 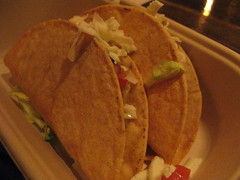 Our food finally arrived in little hard paper trays. “D” for presentation. My bf looked dejected with his sad little tray of tacos in front of him. A big fan of Tacos Por Favor, the Old El Paso-looking shells did nothing for him.

The tacos reminded me of when my dad was in charge of dinner. We’d have tacos like these, tater tots or something instant and easy like that. The burger tasted the same way and was overly spiced up with pepper and salt, again, like Dad got to it and was trying to make it extra delicious for us kids. Aww, thanks, Dad.

After bf ate the tacos he was still hungry but couldn’t bring himself to order something else off that menu so I let him have some of my burger.

I’d say the Alibi Room was a good place to chill if it had more to offer and still had dive bar prices. (A Jameson and Coke here runs you $8.) Located on an intersection in Mar Vista that is two-parts construction site, it’s far off the beaten track. If you went here you couldn’t exactly go barhopping as there are no other cool-ish bars close by. 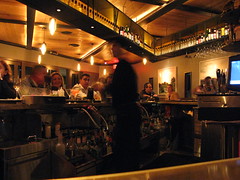 The crowd on the Friday night we went consisted mostly of 30- to 40-somethings. Not a really great-looking group for people-watching. The music was low enough to hold a conversation but not loud enough to be able to make out the song. All in all it was just a ho-hum place to be.

After we finished our food and beer, we took off, making our way to Tito’s Tacos down the street for some much needed nourishment. There you can get four tacos for six bucks.