Lucha VaVoom: Ow! My Head! My Eyes! My Ears!

Last night was quite possibly the craziest L.A. experience I’ve ever had in the 15 or so years that I’ve lived here: Lucha VaVoom‘s Halloween/Day of the Dead show at the Mayan Theatre. Midget wrestlers, fighting chickens and burlesque — how could I stay away?

The show was sold-out so not many could either as it proved a good way to continue that Halloween high note. Downtown’s Mayan Theatre was packed to capacity but fortunately my group had gotten there early enough to score some seats in the balcony. If we paid $50 for the tickets, we could have sat ringside. But after seeing what happens to those who sit in the front row during the show, I’m glad we didn’t.

The show was about 30 minutes late in starting but fortunately there were many bars scattered throughout the venue to keep attendees occupied. “I think they start late to punish early birds,” my friend Lillian complained. It would seem that was so considering that it looked like latecomers were still getting settled in their seats.

I killed some time getting some snacks since I hadn’t eaten dinner and the Mexican food place across the way had forgotten to make the order we had placed. (We asked for a refund after waiting for 15 minutes and watching those who had ordered behind us get their food.) The only food available in the theater was bags of nuts, popcorn and candy bars. All for $1 each.

To quench my thirst, I had a $7 Heineken. Crazy Andy sipped on a $4 Coke since he was still hurting from his Halloween night. 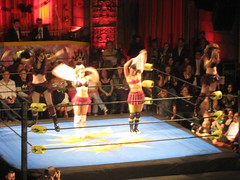 Finally the show started, kicked off by a girl fight of two Catholic schoolgirls versus two vampiresses (?), the Poubelle Twins. The “wrestling match” was so terribly performed that I feared the rest of the night would be the same.

The girls didn’t react to the bitch slaps they were getting and their fake falls were so overdramatic. It was probably the most boring cat fight in world history.

Fortunately, the other matches were loads more entertaining. Some bouts involved up to six wrestlers in the one ring. The luchadore characters were odd and hilarious. The wrestler named the Dirty Sanchez was the most disturbing of the bunch.

In his match, he was thrown over the ropes and into the front row. When he crawled back on stage, his tights were pulled below his buttocks revealing not only a moon no one wanted to see but what appeared to be a shit streak on his right cheek.

At first I thought it was blood from having landed on the chairs, but the announcers kept making reference to “doody” so I knew….blech! Later he’d bend over and you’d see that he did in fact shit his pants. He took off the underwear from over his tights and used it to wipe the streak and then threatened to shove it in the face of his oncoming rival. “Everyone in the ring now has Hepatitis R,” the host joked. Shudder!

The hosts sitting ringside and adding hilarious commentary were Blaine Capatch and Tom Kenny (SpongeBob SquarePants’ voice). A lot of the time their jokes didn’t get a reaction from the crowd, but I was still glad they were there to tell us what the hell was going on with some of the luchadores. 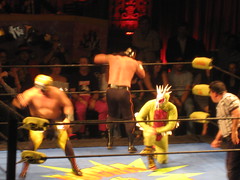 I mean, at one point we were watching on the TV screens a midget wrestler dressed as a baby goat being chased down by a Chupacabra in a hot rod on the streets of L.A. Surreal!

Fortunately security at the Mayan was able to keep the Chupa from catching the cute baby goat once they had reached the ring. The goat was able to go on to defeat some other mini wrestlers with his ring partner, the Mini Chicken.

In between bouts, burlesque dancers would emerge on stage. They, like the wrestlers, were strange characters. Each would get on stage covered in layers of a costume and would then start off dancing very slowly. Suddenly their music would change to something loud with a fast rock n’ roll tempo, and their act would ultimately end with them swinging their pasties — a painful-looking “dance” move.

I couldn’t help but clutch my chest every time they shimmied their chests making the pasties twirl. “It probably doesn’t hurt considering their boobs are fake,” my friends reassured me.

One of the best burlesque dancers was one whom the hosts introduced as “Barbarello.” Dressed like a silver Barbarella space girl, she was attacked by the Poubelle Twins who proceeded to strip her of her clothes. Oh no! Eventually her shirt was pulled off to reveal that she was in fact a man. No boobs! Then she did this five-minute dance with hula hoops. Very cool, especially since it was performed to Goldfrapp’s “Ooh La La,” one of my fave songs. 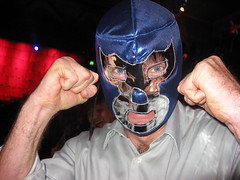 The show finale involved six wrestlers in the ring. If any of them fell out of the ropes, they would get beaten by a bunch of girls — the women wrestlers.

Granted the girls only hit them with straps, plastic severed feet and plastic mace but it was still kinda funny.

Ultimately, all six wrestlers landed in the front row, some thrown and some taking a flying leap from the ring. It was amazing no one got hurt. I wonder if ringside spectators have to sign something beforehand saying they won’t sue?

Finally the show ended and I was sooo exhausted. Spectating Mexican wrestling takes a lot out of you. It was fun but it also felt like going to Vegas. Bright lights, loud music, rowdy crowd and drinking made things you normally wouldn’t find entertaining crazy fun. And just like how I feel about Sin City, I probably won’t return for awhile. I need some time to recover. Fortunately, the next VaVoom show doesn’t happen til Valentine’s Day next year.