Spending Halloween with Metromix and UrbanDaddy 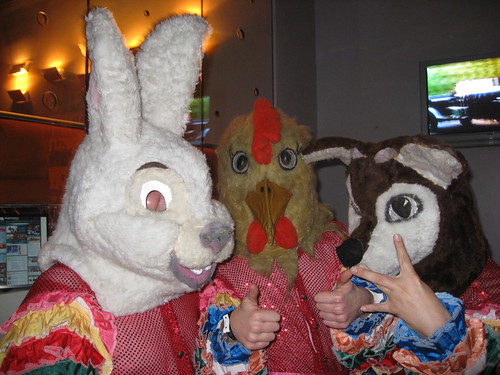 I was a bit overly ambitious with my Halloween plans last night. The agenda was to start off at Metromix’s party at the Standard, drop by Seven Grand for a Halloween cocktail, head over to the Blue Goose Lounge for the Yelpoween party and then cap off the night at the Absolut 100/UrbanDaddy party at Les Deux. And on a school night!

But when we finally made it through the two sets of lines to get to the Roof Bar at the Standard, to our chagrin we had to pay for our drinks. I know, I’m so spoiled. “Maybe we should have started off at Les Deux since they have free drinks,” Shelley, my partner-in-costume said. After paying $8 for a Newcastle, I agreed. “It’s still early….” “Well, let’s walk around for a little bit first.” 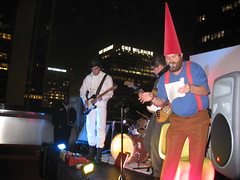 We admired the becostumed guests, some more elaborate than others. I spotted an Inspector Gadget, various Cleopatras, an Amy Winehouse and a Dick in a Box. A garden gnome performed some spoken word while they were still setting up the live screen T-shirt printing, dance floor and photobooth. After spending an hour or so surveying the scene, we left. It looked like things were going to get crazy and fun but we really didn’t want to pay for cocktails, especially at Standard prices.

After making it through Halloween + Hollywood traffic — both car and foot — we finally arrived at the Les Deux entrance. “The Daddy sent me,” I spoke the “password” I got from the RSVP-confirmed email I had received to the woman at the door with the clipboard. “Wuh?” she asked. “We’re here for the UrbanDaddy party…Absolut 100…1920s,” I babbled. “Huh?” “Is this Les Deux?” I asked. “Ohh, no. That’s around the corner in the parking lot. This is Element,” she laughed, relieved. “Ohhhh. Heh.”

Then she put a paper band around my evening-gloved wrist and told us to go to the entrance. But when we got there and showed our bands to the bouncer and woman who held onto the velvet rope, they repeated what the other woman had said. I told them that the other woman had given us the OK. “But you’re not dressed in 1920s attire,” they looked at Shelley who was dressed as an Oktoberfest beer wench.

“What if I took this off?” Shelley said, removing her pink apron. Now her dress was even plainer. But oddly enough that was good enough for them. I think they just wanted us to make a gesture. Finally they dropped the velvet rope. Shelley and I giggled as we walked down the corridor. 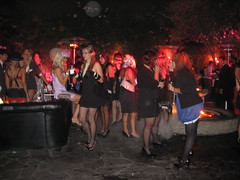 That was a truly annoying episode. But it wasn’t until we finally got into the courtyard of the club that I actually appreciated the door people’s efforts to preserve the 1920s theme. With women dressed as flappers and men wearing pinstripe suits, Les Deux was transformed into a jazz club from the Jazz Age.

In the courtyard a dj spun some contemporary tunes but in the back was an actual jazz band. Apparently they’re Carson Daly’s house band and they were damn good. Does Carson Daly still have a show?

Everyone danced and shimmyed. Flappers twirled in their fringed dresses. All the while, the Absolut 100 cocktails flowed. And the bartenders made them strooong! But it helped that they were working with 100 proof vodka. There were three Absolut 100 specialty cocktails to choose from:

None of them sounded particularly appealing or all that special but I settled on the Stork, essentially a screwdriver. Later in the night we found out that we could really order any drink with vodka, didn’t have to be on the list. Didn’t matter though since I’m not that crazy about vodka. But they were free so I wasn’t going to complain. 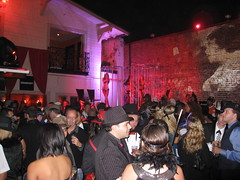 Three cage dancers kept the courtyard crowd entertained. I didn’t know they had that in the ’20s. The least they could have done was make them where flapper lingerie with stockings and garters or something. As it was they wore bras and panties and a string of pearls. They didn’t so much as dance as they did the ol’ bump and grind. But at least the crowd loved it.

Since it was a school night and was past 1am and I was ready to go home, I told Shelley it was time to leave. But girl was busy chatting with the saxophonist who was on a drink break. And later she started talking to some guy sporting a paperboy hat. “Do we really have to leave?” she protested. “Um yeah.” “You’re a bitch,” the paperboy said, and then he smiled broadly. “I know.”

After I dragged Shelley out of the party, we split a surprisingly delicious hot dog from one of those parking lot carts. With her mouth full, she asked, “Wanna still try to make the Yelpoween party?”

More pictures from the Metromix and UrbanDaddy parties.