Hennessy's Art of Mixing Academy at the Roosevelt 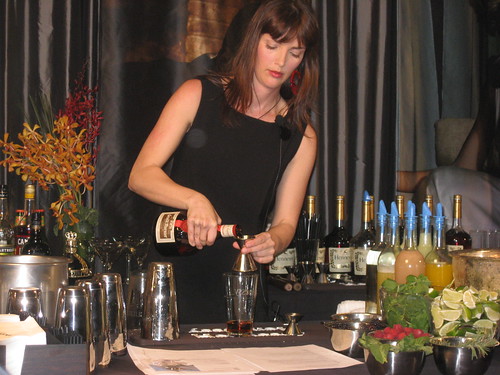 A room full of some of the best bartenders in L.A. (and even the nation)….and me. It was my secret little heaven. My boys from Seven Grand were there, too, of course — Aidan, Patrick and Damian. It was so cool to hang out with those guys on the other side of the bar for a change. Marcos Tello — also of Seven Grand and cocktail catering company, For Medicinal Purposes — hosted this exclusive bartender-only event and snuck me in so I could witness the mixology stylings of renowned New York bartenders Christy Pope and Chad Solomon. 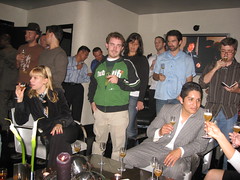 At Hennessy’s Art of Mixing Academy, thrown at the historic and still posh Hollywood Roosevelt Hotel, Pope and Solomon would take their audience of bartenders through the history of the cocktail while mixing up the drinks in an effort to demonstrate the cognac’s cocktail versatility. We’d follow along with our tastebuds as the concoctions were then passed out to the room in little sipping glasses.

There were six vintage cocktails to cover. I know, eesh! (Shhh, truth be told I didn’t empty all my glasses. That’s a lot to drink in less than two hours, dude.)

Pope did most of the mixing, carefully using the jiggers to measure the ingredients. She explained how like cooks, bartenders should measure the amounts to achieve the right taste in a cocktail. Meanwhile Solomon gave everyone a history lesson of each drink and talked us through the process of the recipes. These two were awesome to watch and I wish I could have seen them when they worked their magic at some of the best establishments in New York. Such charisma and huge breadth of knowledge.

So that concluded the lesson portion of the evening. I learned so much and realized more than ever how much I want to go to bartending school, especially this sort where you learn to develop an appreciation for the history of the cocktail. 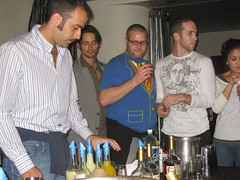 Afterward, I got to mix and mingle with some of the bartenders. I’m terrible with names but I did get to chat with the fellas from Comme Ca, Sona and Osteria Mozza. All, like the Seven Grand crew, take their mixology very seriously. A lot of them even jumped behind the bar to play with the ingredients on hand — fresh berries, mint, juices, etc. — making drinks for each other or no one in particular.

Marcos said he’d love to strengthen the guild of L.A. bartenders by continuing to offer these sorts of events to them. His goal? To make L.A. the next cocktail capital of the world and bring the art of the cocktail back. As a “friend of the cocktail community,” I’m with you there, Marcos!

More pictures of the Art of Mixing Academy event.