What Are You Doing on Halloween, L.A.? 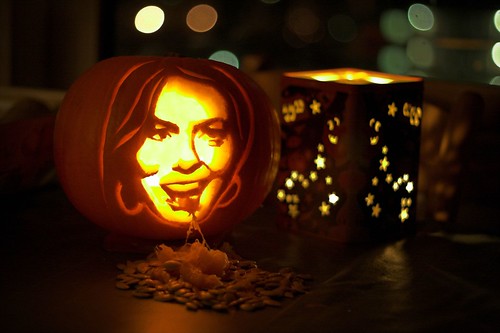 Sucks that Halloween falls smackdab in the middle of the work week. You can’t get into anything too crazy, like gorge yourself on candy corns until you puke orange. And I’ve no doubt that you’ve got lots of big plans for this weekend, faux Hallow’s Night, but how are you going to spend the actual Halloween night? Kicking it at home and passing out sweets to the kiddies or going hard-core at a late-night Hollywood Halloween party? I asked some of my crackhead colleagues — hip social butterflies in the know who I figured would have some really awesome plans for the night — and here’s what they said:

Alexandra Le Tellier, managing editor/bars & clubs editor of Metromix: “I’m going to the Metromix party at the Standard Downtown. I’m usually costume-phobic, so I’ll probably wear all black and cat ears unless I get a great shot of inspiration over the weekend. I am not, however, candy-phobic and plan to eat as many mini chocolate bars as humanly possible.”

Andy Sternberg, Netzoo and LAist: “i have absolutely no plans or idea what i’ll be doing. i never make plans in advance and suck at picking out costumes. but i’m open to any and all suggestions!”

Chris, do-everything girl at Modular Records: “our Australian one man band Muscles…is playing a show at Detroit Bar in Costa Mesa/Orange County. Supposedly, it’s going to be a pretty big Halloween party. I’ve been charged with the duty of driving him down to the show. I am probably not going to dress up because I’m a curmudgeon when it comes to commercialized holidays, excepting Christmas. I am, however, going to try to get Muscles to eat Roscoes Chicken and Waffles with me in Long Beach. We’ll see how my attempts play out.”

Damian, cocktail artist/mixologist at Seven Grand: “working at seven g. catching up on the time away but, i promise to make it spooky.woooooooooooooo.”

Dan Silberstein, CozmoCard: “Don’t know what I’ll do, but I’ll be The Bachelor… it promises to be the most exciting rose ceremony ever!”

David Markland, Creepy Los Angeles and Metroblogging LA: “I’m taking the only 12-yr-old in my neighborhood (and her mom, and my girfriend) to Angelino Heights. The adults will all take turns pretending who the real parent is and wearing masks and posing as really tall kids.”

Kylee, bartender at Katsuya: “Finances are more tricks than treats these days, so I will probably be going as a bartender. It’s a stretch right? But I think I have JUST the perfect costume: Designer pumas, velvet brand pants and a matching starck-designed lycra mock turtleneck—to keep me warm in this 90-degree weather and the lycra to remind me that I really shouldn’t be eating late at nite.”

Lesley, Eater LA: “I’m kinda lame and haven’t dressed up for years, though if I did, I suppose I’d go as Dan Akroyd doing Julia Child cutting her hand off from that classic SNL episode. My SO and I end up with a big bowl of candy because every year I get so excited to hand it out to the kids in the neighborhood, but then realize we really don’t have many kids in the neighborhood. This year, however, I haven’t turned down any party invitations, though most seem to be this weekend than the real Halloween. I guess on Wednesday, I’ll drink some black Sambuca to get in the spirit, then eat handfuls of candy corn until I feel ill.”

Sarah, the delicious life: “I’m putting on one of those little silk chinese dresses (have no idea what they’re called – chee pao?) to wear to work, and a blonde wig – since wearing the asian stuff isn’t really ‘dressing up’ for an asian gal like meself. on the 31st? i think i may go to the absolut 100 party at les deux!”

So it seems like a lots of folks are short on plans for the spookiest night of the year. Surprising. But then again I, myself, am still debating whether to watch The Shining at the cemetery, hit the UrbanDaddy/Absolut 100 1920s party at Les Deux or just do a chill scary movie night at home. What are you doing?