The 24 Hours of LeMons: Endurance Race of POSs 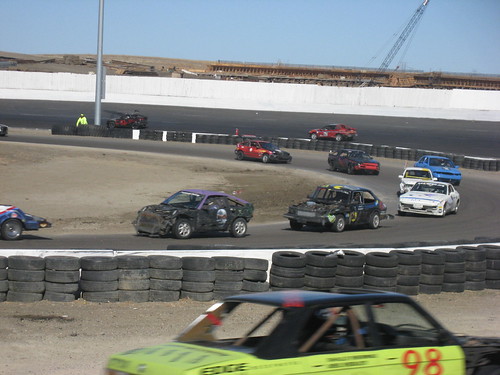 Is it possible to build an endurance racecar for under $500, including its value, parts and labor? Judging from the 80+ participants at the 24 Hours of LeMons, this past weekend in Altamont, California, it is. What am I talking about and why doesn’t it have anything to do with L.A.? Because this event was the weirdest and probably the funniest thing I’ve ever seen. 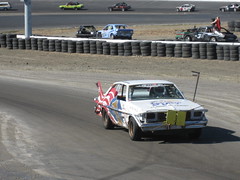 Basically LeMons is a different take on that endurance race, 24 Hours of Le Mans. But instead of racing supercars for 24 hours in France, they race $500 beaters for 14 hours (split into two 7-hour days) in Northern California. And the participants totally have fun with their entries. They purchase junkers that basically have little to no value and rebuild it out of parts they retrieve from the junkyard. It was amazing to see the sorts of cars that were resurrected and able to run in an endurance race no less.

Of course there were some cheaters who tried to pass off newish cars as being valued at less than $500, like Porsche 944s and BMW 7 Series, but the teams would get in trouble by the BS Factor judging panel, a bunch of guys dressed in robes and white judge wigs. This year a TV channel’s entry got penalized something like 350 laps for their obviously more-than-$500 3 Series. 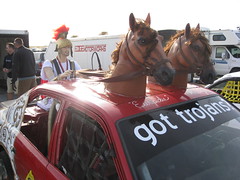 There were also teams who seemed to use part of their $500 budget toward decorating their cars as one entry had two horse heads sticking out of the roof and a mannequin dressed as a Trojan coming out of the trunk while the drivers dressed up in togas (no relation to USC). Another team painted their car with black and white zebra stripes and did a mohawk of brooms on the roof for the zebra’s mane. And a Miata that seemed to be an ode to Lawrence Welk spurted out bubbles as it ran around the track.

The race was run on a mile-long racecourse and with over 80 cars running laps at the same time collisions, spinouts and rollovers are inevitable as there are a mix of skilled and newbie drivers. Accidents ranged from the comical school bus decorated Ranchero stuck in the mud to the heart-stopping CRX flipped on its lid.

That CRX belonged to Eyesore Racing, the team I was able to tag along with for the event. The six-person team consisted of a bunch of gearheads with varying degrees of racing skills. For their 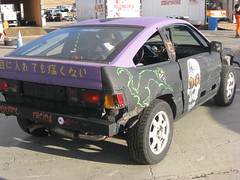 racecar, they took a beat-up ’84 Honda CRX, one they had raced at last year’s LeMons, and built it up again to peak racing form…well, running condition.

It was their second LeMons race and they were looking to get as close as they could to winning. With a 77-horsepower Honda they had no illusions of grandeur. But they would stay on top of the competition with an organized pit crew and minimal pit stops.

Considering that their car had rolled over, they were still able to get it running with a fresh driver in it in about 15 minutes. If there had been an award given for biggest comeback, Eyesore would have won it as over the course of the race they went from 2nd place down to 23rd and finished up in 7th. Nearby teams marveled at Eyesore’s supportive members and really well-run pit stops. It was cool being part of their group if only as team photographer. 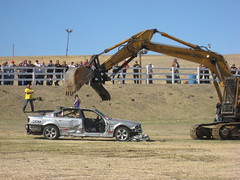 Highlights over the weekend of racing, outside of Eyesore’s mini triumphs, included the deluxe Port-a-Potties, being able to get out of the dust storm by watching the race in our truck’s cab and spectating the People’s Curse award. The People’s Curse award was voted on the same ballot as the People’s Choice award where everyone chose the car that they loved and the one they hated.

On the second day, the People’s Curse choice would be pulled off the track and then ceremoniously smashed in front of everyone. This year everyone picked that expensive-looking 7 Series. Yes, it’s a bit redneck but I have to admit that it was fun watching a BMW get its doors torn off and then smashed in by what can only be described as a giant mechanical dinosaur.

And in the true spirit of LeMons, that 7 Series was amazingly back on the track later in the day. Two-thirds lighter but still able to do some laps. You had to see it to believe it.

I loved being part of this event and wish it was actually closer so you could see it, too. Hopefully, the event organizers will consider moving it down a bit to Buttonwillow. As it is, if you want to see it, another LeMons is scheduled for the weekend before New Year’s at Thunderhill Raceway Park in Willows, California.