Providence's Bar: Getting Schooled in Cocktails 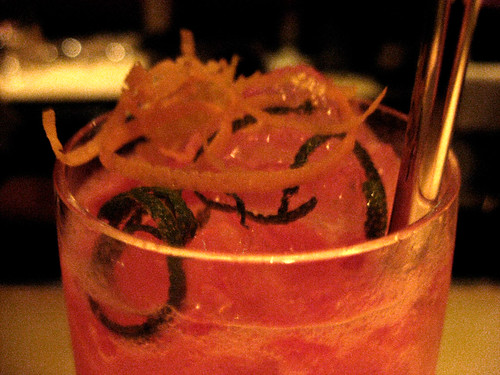 I just met a girl who probably has one of the most awesome jobs ever. She’s the “Chambord Ambassador,” meaning she gets to go out just about every night in search of expert mixologists (aka kick-ass bartenders) to create new cocktails involving the raspberry liqueur.

I met up with Ramona at the bar in Providence on Melrose since she knew the bartender there as he’s one of her great finds. Daniel, who also mans the bar at Spago’s in Beverly Hills, is one of just two bartenders at this fancy restaurant.

Watching him work, I could see what Ramona was talking about. He garnished with artistry and shook the cocktail shaker expertly, plus he knew his liquor and cocktail history. And I felt like I could ask him what he thought was the best tequila, whiskey, etc. and he wouldn’t steer me wrong. I learned a lot just by sitting at his bar last night. I even learned that tequila is actually the only liquor that’s an upper! It’s the agave. Interesting! 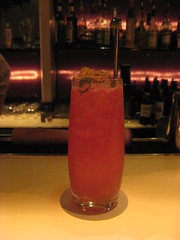 Daniel proceeded to make us the Rhode Island Red ($12) — Herradura Silver tequila, Chambord, raspberries, agave nectar and ginger beer. Normally, I’m not a fan of tequila but the liqueur and fruit juices cut down that harsh taste which I usually find unappealing. Instead it was a drinkable, delightful cocktail that was surprisingly not too sweet. The hint of ginger beer provided a nice after kick.

The cocktail list at Providence is everchanging as they try to keep it fresh and seasonal, usually changing cocktails every week or so. But Daniel said that the Asian Pear martini ($12) never gets kicked off the list because it’s so popular. This yummy-sounding concoction is made up of Stoli Vanilla, sake, passionfruit, vanilla syrup and organic pear juice. I didn’t get to try it, but definitely will have to during my next visit.

On the side of the cocktail menu opposite its specialty cocktails is a list of old-school cocktails which, too, is everchanging. They usually list classic drinks alongside their city of origin and birth year. I love those details as it shows that they appreciate cocktail history. This week’s classic list includes Daniel’s favorites, Jack Rose and Tommy’s Margarita. Next week, the Dark & Stormy will be added.

Ramona and I were also treated to some off-the-list cocktails. One was made of St. Germain elderflower liqueur, gin, bitters and grapefruit juice with a splash of champagne. I asked Daniel what it was called and he said he hadn’t thought of a name yet but then he followed that up with, “Caroline.” Very smoooth. I appreciated the gesture but didn’t have the heart to tell him that…I hate grapefruit juice. He said that grapefruit juice and that elderflower liqueur go very well together. However, I found it enhanced the bitterness of the champagne.

I really liked the next cocktail, though, which was Chambord, rum and Mirabella plum wine. It was sweet, but again, not too much. Ramona said it reminded her of summer in Tokyo and I had to concur. I loved that mix of rum and plums. Again, Daniel didn’t have a name for this one yet but we suggested he go with something Japanese. OR, how about calling THIS one “Caroline”? Heh. 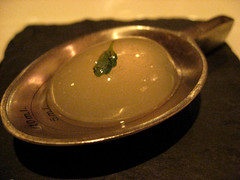 In between our tastes of “Irish Whiskey better than Jameson” (Powers Irish Whiskey) and one of the smoothest ryes ever (Black Maple Hill Rye, 18 years old), we were treated to some fancy Jello shots, aka a Gin & Tonic gelee as well as a Mojito gelee, to “cleanse our palates” before we dove into our order of salmon risotto.

Basically they just mixed the cocktails with gelatin. I could taste the alcohol but I have to say that I think I still like Jello shots better.

We were also given a plate with a teeny-tiny piece of salmon and a tiny beer mug filled with watermelon soup. These were meant to be enjoyed together, but I didn’t know that until I ate my tiny salmon first. Eesh! Fancy food and all these rules.

Finally our salmon risotto ($21) arrived looking especially frothy. “That’s sake foam,” Daniel said. I couldn’t taste the sake when I scooped it, along with the creamy risotto, into my mouth but I could taste the salmon. Man! this dish was sooo delicious. It’s made up of Carnaroli rice, sweet peas and smoked salmon with sake espuma. I kinda wished it was double the portion though. As it was, I was left hungry for more.

Fortunately, Daniel showed up with a plate filled with white peach gelees, chipotle caramels and chocolate meringues. All very yummy. My fave was that chipotle caramel which also seemed to have salt crystals in it. Nice mix of spicy, salty and sweet.

We were also given the dessert menu. But even though they listed intriguing-sounding sweets like the milk chocolate-whiskey panna cotta with Bailey’s ice cream and coconut raviolo ($12) and the chocolate ganache with fig compote and salt & pepper ice cream ($12) we had to pass. Again, next time.

FYI, in addition to the a la carte desserts, there’s a dessert tasting menu which you can also have paired with wine — three courses, $40; five courses, $60; and a full eight courses (hard-core!), $70.

So I really enjoyed my schooling at Providence and will definitely have to return to see what’s new on the amorphous cocktail list and even that dessert menu. But come back for the food? Even though I appreciate the unusual mix of ingredients and don’t doubt Gourmet Magazine‘s claim that Providence is one of America’s top 50 restaurants, I so can’t afford a dinner there. (Dishes range from $15 to $48.) But if you can, by all means check it out. However, may I suggest enjoying your meal at the bar?