Finally! I was able to make it to Crumbs Bake Shop after being intimidated by those crazy Beverly Hills drivers and traffic. But after work and after a lame happy hour at El Torito in BH, dotsara and I walked over to Sprinkles’ newest adversary.

At 8pm on a weeknight the place was empty save for a couple of customers. It was actually a lot smaller than I had imagined. I guess I was hoping for cases and cases of cupcakes. Instead there was one cupcake-dedicated case and I think there was a cake case, but I didn’t care about that one.

The two young women behind the counter were very friendly and, more importantly, oh-so patient as dotsara and I fired a bunch of questions at them. “What’s in a Fluffernutter?” “What’s a Devil Dog…a Blackout cupcake…an Artie Lange?” They answered all inquiries without a trace of exasperation.

Standing in front of the case, I just couldn’t decide. I was a bit overwhelmed by all the different flavors. Unlike Sprinkles with its simple cupcake choices, these seemed to be a complex cocktail of flavors. Where in Sprinkles I’d be able to say, “I’d like the chocolate coconut, dark chocolate, etc.” Here, I wouldn’t know where to begin. Also, most had chunks of stuff garnishing the frosting making it difficult to imagine biting into.

“What’s your most popular cupcake?” I asked one lady. She said the Artie Lange is. “It’s usually sold out,” she added. The Artie Lange ($3.75), named after a Howard Stern cohort, is the vanilla cupcake filled with chocolate buttercream and topped with a chocolate fondant and decorated with black and white sprinkles around the edge.

“What’s your favorite…or the store favorite?” “The Caramel Apple Cupcake. [$3.50] It has actual pieces of apple in it.” She described how light it was and not too sweet.

“Sold! I’ll take ’em both,” I said triumphantly. But as dotsara and I left the quaint borough-esque bake shop, I bemoaned my decision. I can’t eat them both! They’re HUGE! Dotsara had her own cupcake, the carrot cake one, and so wasn’t willing to split my two with me.

So, the next day I decided to ask three of my co-workers — one of whom had participated in my cupcake challenge — to go in on a little taste test with me. I had wrapped the bake shop box with Saran Wrap the night before in an effort to preserve the cupcakes’ freshness. It paid off as both cupcakes were still moist as we dug into them.

First we tried the Artie Lange. I tried to cut four pieces evenly but the moistness of the cake and the buttercream within along with the fondant made that difficult. Donna D. asked for a fork since eating it proved messy. I just dug in with my fingers, licking them off as I went.

All of us agreed that the Artie Lange buttercream and fondant were just way too sugary. It was just like putting a spoonful of sugar in your mouth. I ended up scraping all that noise off the rest of my piece before I could take another bite. But the vanilla cake itself was soft and moist. 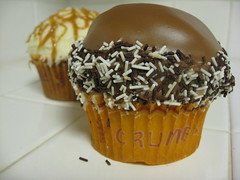 “What do you guys think of the Artie Lange?” “It’s pretty righteous.” “Yeah, it’s really good.” “It’s better than any of the cupcakes we had at the cupcake comparison.” “A little too much frosting.”

Then we cut into the Caramel Apple cupcake. This was hard to cut into four pieces as well. “I didn’t think that frosting could be sweeter than the Artie Lange, but I think this one is even sweeter because it’s got caramel in it.” “I like it better…not as sweet.” “Their cake is very good but their frosting is too much.” “Yeah, the frosting is a little overdone.”

Even dotsara said in her report of the carrot cupcake: “There’s almost the same amount (by volume) of frosting as there is cake and that’s just too much. It had the effect of making the cupcake really top heavy and unwieldy even after I’d cut it in half. Boo.” But she did also add that this carrot cake was second only to her favorite from childhood memory.

Anyway, it seemed the verdict was that for the money, these were good cupcakes. But I, myself, found them too complicated. Yes, you get a lot of cupcake for your money; it seems more like a small cake than an actual cupcake. But when it comes down to it, I think I’d rather be able to unwrap my cupcake at my desk, in the car, at a party and stuff it in my face. Rather than have to break out a fork and some napkins.