The Promenade's Cabo Cantina: Only for Happy Hour 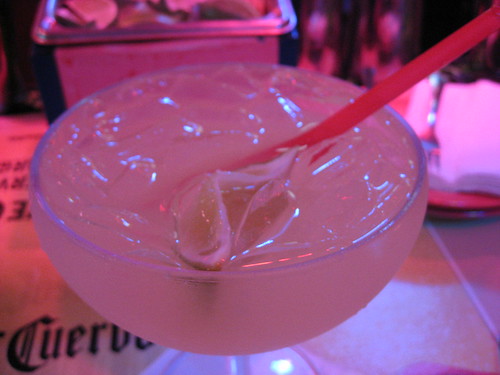 I’m not a big fan of sports bars but I am a huge fan of happy hour. And Cabo Cantina has a pretty good 2-for-1 happy hour, but that Brentwood location is a zoo, good luck finding a seat or even your feet for the rest of the night.

So I was somewhat relieved when I found out that Cabo Cantina opened up on Third Street Promenade about six weeks ago, replacing the mediocre Sunset Bar & Grill. I figured there wouldn’t be as many people yet and I was right. Actually we had just missed the first happy hour (4-8pm) by half an hour and the second happy hour wouldn’t start til 10:30pm, going til 12:30am. Yup, a second happy hour. They don’t seem to have that at the other Cabos. 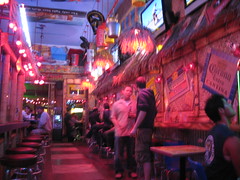 “Why don’t you just have happy hour all day?” I asked the bartender. “Because then we wouldn’t make any money,” he replied. He’s so wrong. They’d be lining up down the street for one of the longest happy hours in L.A.!

Anyway, we grabbed a couple of seats at the bar, always my favorite place to sit. Beside us was a girl leaning heavily on the guy she was sitting next to. “She’s sooo drunk!” I whispered to my friend Steph. “No, I think she’s crying,” she replied. And looking back at the girl I saw that she was teary-faced snuggling into the guy’s neck. But later on as the couple was leaving, I heard her say, “I’m not that drunk. I’m not…I’m OK.” Hm.

Even though we missed happy hour, Steph and I still ordered up some margaritas. Actually I just had the one ($11), while she had two. I hadn’t been all that happy with my margarita even though it had Patron. It didn’t taste all that strong. All I could taste was the sharpness of the lime and a lot of mix, but I still found myself getting a bit buzzed. 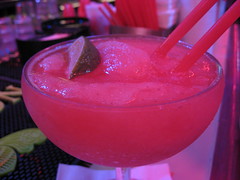 Steph, on the other hand, liked her first strawberry Patron margarita but couldn’t even finish the second one, saying that it tasted like a virgin drink. Maybe this time the bartender didn’t put Patron in it since she didn’t specify? Anyway, it always makes me sad to see a drink left behind but if it was that bad then there was no way to save it.

Looking around toward the front of the not-too-crowded bar, I couldn’t help but notice that 99% of the crowd (not including the well-endowed waitresses in tight tank tops) were young men. But unfortunately, they weren’t really anything to write home about. Some came up of the bar to order their drinks and I could hear that they were German. Then I realized, since this is the Promenade where lots of tourists wander then this must be where the European frat boys hang out. Do they have frats in Europe?

“This is a good place to go if I wanna get date raped,” Steph half-kidded. Later she admitted that she worried that a roofie could have been dropped in her drink while we were at the bar since she had let her margarita sit at her elbow and out of her line of sight. She was OK of course, but I could see what she was saying. A lot of guys here, but then again, they were all staring at the TV screens hanging from the ceilings.

I had ordered up some food but it really wasn’t anything worth writing about, so I won’t.

But even though my experience here was less than memorable, I’d probably still drop by for that happy hour after work. Two Cadillac margaritas for the price of one can’t be denied. Also, if I’m ever on the Promenade and have a hankering for loud music and some drinks (again, only during happy hour), maybe before or after a movie at one of the four movie theaters in the area, I’d come back.

There aren’t as many seats at this compact Cabo as that other frat boy-populated Barney’s Beanery just a block away, but there is that happy hour…and margaritas.